Is Scrooloose from Beyond Thunderdome a stranded War Boy?

What canon information confirms or denies that Scrooloose from Mad Max: Beyond Thunderdome foreshadowed the War Boys featured in Fury Road? 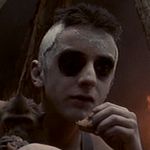 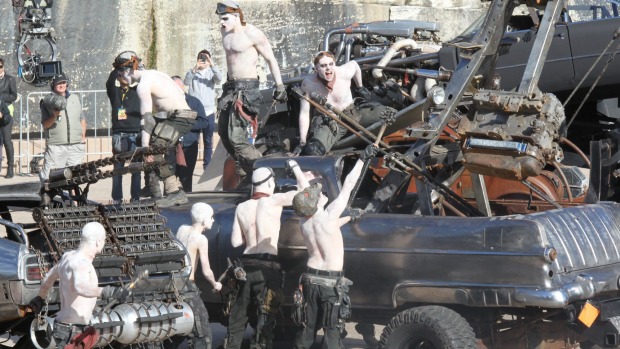 Unlike many modern film franchises, which have recently been leaning towards strong continuity an even the concept of "shared universes", the Mad Max films have never been particularly bothered with continuity.

Thanks to the format of Mad Max: The Road Warrior (which has a now adult Feral Kid telling the story of Max to his tribe) and the events of Mad Max: Beyond Thunderdome (which has the story being told by a group a kids that Max rescues), we can assume that Max's story is one told throughout the wasteland, with different embellishments depending on who tells it, possibly even multiple peoples efforts and achievements assigned to one man - a future legend or myth, if you will.

The point of all this is that the continuity of these films inherently doesn't matter. You can say that Scrooloose is a War Boy if you want, or that he grows up to be Nux or Immortan Joe or he is the last remaining member of their tribe - but you won't likely ever get a solid answer as the director himself, George Miller, simply isn't interested in the question of continuity.

From an interview with director George Miller himself;

Something I noticed not in the film but in the press reception to it was some confusion about how the overall continuity of the Mad Max films work. I've got my ideas about what's going on here, but can you clarify what you think the relationship between these stories is?

Well, they're not really connected in any very strict way. They're another episode in a saga of a character who is pretty archetypal: the wanderer in the wasteland, basically searching for meaning. This is someone we see in the classic westerns, in samurai stories. You can't really put a chronology [of the Mad Max films] together. They were never conceived that way. After I made the first one I had no intention to make a second, the second was ultimately an attempt to do the things I couldn't in the first one and so on. They were all standalone films in many, many ways.

George Miller in an interview with with Den of Geek

I've been doing a lot of research and I have one theory. What if, instead of taking place between Mad Max and Road Warrior, Fury Road actually happens between Road Warrior and Thunderdome? There is at least fifteen year gap between the two films (I understand there is no set time line but this is deduced through hints, easter eggs, and background props).

So following this theory, what if the Hardy's Max is indeed an older version of the Feral Kid? Fury Road could take place shortly before Thunderdome in a separate location of the wasteland, further away from bartertown. He would be at least 25-30 years old at that point. That could explain why one of Joe's warboys is there, after the fall of Immortan Joe, Scrooloose could have simply wandered away from the citadel.

This would also explain why Gibson's Max shows no aggression towards Scrooloose. If he were the same Max as Hardy's why would he simply just accept the presence of a warboy when the warboys spent so long hunting him? He sure didn't just roll over for Nux in Fury Road. Gibson's Max has no quarrel with the warboys, which explains why he shows no aggression. This is just my theory, I'm still doing research though. Hope I helped at least a little.

Unfortunately Fury Road is a reboot rather than a continuation of the original Mad Max trilogy. The movie had been in production for 10 years, originally slated to have Mel Gibson continue his role as Max. However after his public meltdown they opted to recast the role with Tom Hardy instead. Now with the age difference to the main character they rewrote the script to the point that it was no longer following the same timeline. The original timeline puts Thunderdome 18 years after the first movie, the reason Max is shown with gray hair. However it is stated by the writer that Fury Road is 40 years later in the story.
This has lead to a huge amount of continuity errors because the tattoo he gets at the beginning has the number of days since the fall, coming out to 32 years which with a now 30 year old Max still claiming to be a cop before the fall.

I do strongly believe that because of the character design similarities and the fact that we're introduced to Scrooloose in a place with naturally occurring water, could be speculated as the future location for the Citadel. Though without better backstory for Scrooloose I'm not able to speculate further.

17
In Fury Road, who is the little girl who torments Max?
3
How can the fate of the Interceptor be consistent?