Who originated the concept about how gods are actually aliens who need "worship energy"?

An early story I've come across is the Star Trek "Who Mourns for Adonais?" about how the Olympian gods were actually powerful aliens. When they realized that humanity no longer worshiped them, they (with the exception of the story's Apollo) "...spread themselves upon the wings of the wind and faded away into nothing...".

A more recent one would be the Ori of Stargate Atlantis. And I quote, "...ascended beings can be empowered by massive numbers of humans worshipping them." (In one episode, when people stopped believing, Adria lost most of her powers and Morgan de Fay was able to engage her in an eternal battle.)

My question then is not about stories how primitive men confused aliens with gods (the well-known "ancient astronaut theme"). Those are quite common. Rather, I'm looking at the sub-genre where the aliens willfully masquerade as gods and absorb the "worship energy" of their believers.

Question: Who was the earliest author (and what story) do we first find this "quasi-vampiric" concept? (It is not a perfect comparison because the believers do not die -- they just feed and feed the alien with their worship.)

In the '40s, A.E. Van Vogt wrote a bunch of stories that used this concept in a very literal way. I'm thinking of The Book Of Ptath, published in '46-'47 (and based on earlier published stories) where the protagonist struggles to get belief that powers the artifact which in turn powers him. It's been several years since I read it, so I'm hazy on the details, but the principle players were both gods and the book was meant to be science-fiction (rather than fantasy), though we are most certainly proving Clarke's third law here. 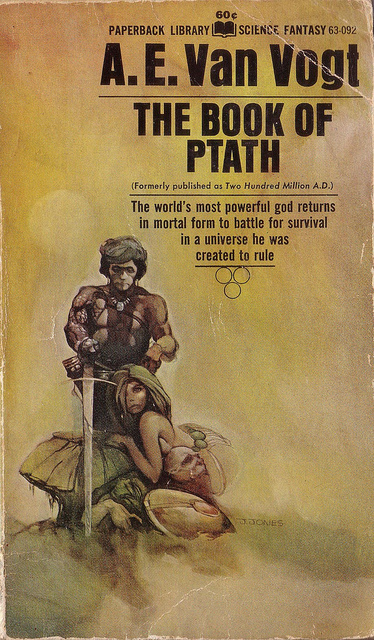 I've read all the Astounding's from 1938-1952, and I don't recall anything else (much less anything earlier) than Van Vogt in this category, but I can't rule out that some 19th century author composed something along the same lines, given that century's fascination with, e.g., "animal magnetism". And a lot depends on how you define "science fiction", as noted. For example, Balzac's The Wild Ass' Skin overtly defies science and engineering—i.e., the skin cannot be compressed, burned, melted, stretched, or otherwise transformed by any industrial or scientific means—but it does so along a line that Balzac himself felt was philosophically sound and possible once he mastered alchemy or magnetism or whatever.

Now, if you want to know who the first Jedi Knights were? The Vril-Ya, in Edgar Bulwer Lytton's The Coming Race. Some of the Vril-Ya were powerful enough to wipe out entire cities, and EBL does actually use the word "demigod", but it might be that in the 19th century, it was a little too transgressive to say "they were gods".

Hope this was of some interest.

Not the answer you're looking for? Browse other questions tagged story-identification aliens history-of religion or ask your own question.

49
Originator of the "Gods Require Belief" Trope
13
In ancient times various alien "gods" cause/feed on worship. Traveler & girl must hide object that threatens gods, fortunately lose it in the desert

25
Which short story was about aliens thinking soccer was a form of worship?
31
Who is the unnamed God in the book 'American Gods'?
2
a children's book about a boy and his dad who are actually aliens
7
Which Sci-Fi work introduced the concept of "Advanced aliens mistaken as Gods"?
54
How many Gods are in Game of Thrones?
6
Are the Klingon gods in Stovokor?
20
Who or what do the members of the Abbey worship?
11
Short Story about Aliens Confused about the Concept of Natural Death
17
Who wrote it? A short story about aliens replicating things