Who made the Dyson's sphere in Star Trek TNG?

According to this wikia, the Dyson's sphere discovered by the Enterprise in the episode, "Relics" was large enough to support the life of 4 million earth sized planets, if you do some rough math, that's billions upon billions of people (potentially 24 quadrillion people), and 3,999,750 more planets than all the member planets of the federation, yet, they find it uninhabited, abandoned, and somehow have no clue who built it, or where they went. You could have literally fit the entire population of the federation of planets inside this sphere (if the star inside the sphere had not been unstable and emitting deadly amounts of radiation), and they would only have occupied about 0.0000375% of its surface area. How is it possible that no one in the known galaxy knows about this megastructures history, or its former inhabitants? 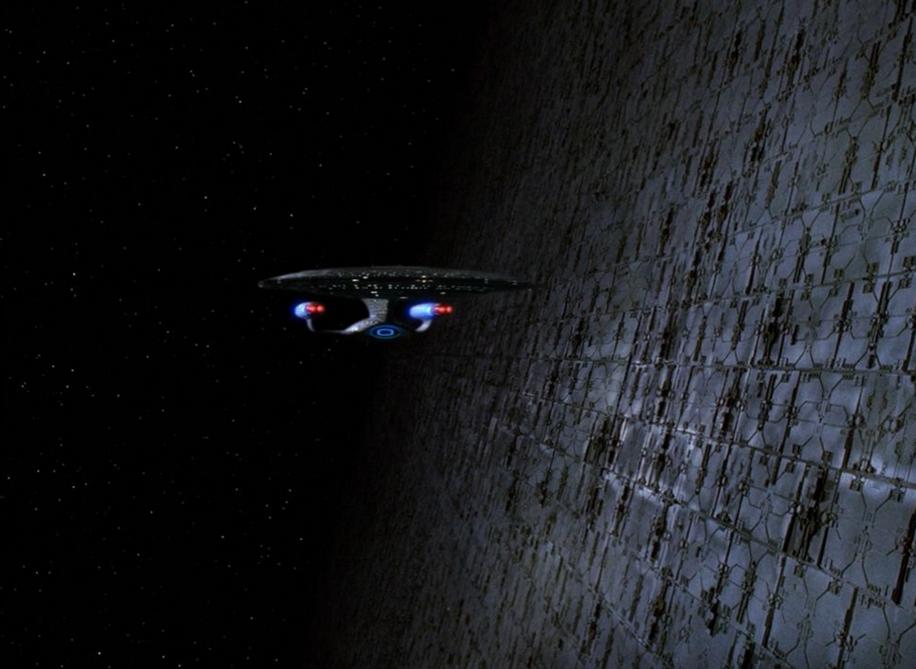 Why is the Dyson Sphere uninhabited and abandoned?

This is answered in the episode itself. The star is unstable:

DATA: The sphere appears to be abandoned. Sensors show that the star is extremely unstable. It is experiencing severe bursts of radiation and matter expulsions.

PICARD: Then that would explain why they abandoned it. But if there's no one still living there, how were we brought inside?

DATA: I believe we triggered a series of automatic piloting beams designed to guide ships into the sphere.

DATA: It is a solar flare, Captain. Magnitude twelve, class B.

How does no one in the known galaxy know about it?

First, it's hard to find. Since it completely obscures the star it surrounds, it's pretty hard to distinguish it from open space. It also seems to not be emitting much in the way of communications signals. Data finally reports "something on the sphere which could be a communications device" but not until after they've been in orbit for some time. It is only "emitting low intensity subspace signals." It's likely that from a distance, there's nothing to detect at all.

It also seems to be a bit out of the way. The Jenolan crashed on it and was broadcasting a distress call for seventy-five years before the Enterprise passed by.

As for why there aren't any former inhabitants telling people about it, the episode makes no indication how long the sphere has been abandoned. It could easily be a long long long time. The Iconians, for instance, were highly developed when their homeworld was destroyed 200,000 years ago. And some of their technology (i.e. the Gateway) is still functional. It's not a stretch to think that a civilization that could build a Dyson Sphere could make it last hundreds of thousands or even millions of years uninhabited. (And even a million years isn't much in the lifetime of a star.)

Neither has ever been addressed, in either canon or in any licensed material.

In what we consider true "canon" of star trek (tv show/movies), this is not answered. In the lower tiers of cannon it was answered in the star trek online mmo. In sto this and another dyson sphere were created by a race called the solangae, we also have instances in game of dyson spheres being created by the iconians. http://en.memory-alpha.org/wiki/Dyson_sphere

TL;DR : We never get an official answer, but one of the TNG follow-up novels takes a few guesses and attempts to expand on the Dyson Sphere artifact.

The only Star Trek novel to expand on the story of the Dyson Sphere is "Dyson Sphere" by Charles Pellegrino & George Zebrowski. It's TNG novel #50 and has the following summary:

Two hundred million kilometers across, with a surface area that exceeds that of a quarter-billion worlds, the Dyson sphere is one of the most astounding discoveries the Federation has ever made. Now the U.S.S. Enterprise has returned to explore the awesome mysteries of the sphere. Intrigued by what is possibly the greatest archaeological treasure of all time, Captain Jean-Luc Picard hopes to discover the origin of humanoid life throughout the galaxy -- or perhaps the ultimate secret of the Borg.

But when a neutron star approaches on a collision course with the sphere, a mission of discovery becomes a desperate race against time. The many sentient species inhabiting the sphere face extinction -- can even the Starship Enterprise save them all?

In the novel, Picard leads an expedition back to the Dyson Sphere for more in-depth study. What they find is that the sphere is far more sophisticated than they believed, and is hardly lifeless. Rather, the sphere is functionally a gigantic zoo-ship that houses countless species, some of whom are just becoming warp-capable. The Macguffin of the story is a neutron star which seems to have been fired at the sphere to purposely destroy it.

Throughout the novel, Picard and his team make guesses as to who built the sphere and why they abandoned it. The author's pet theory - the one he keeps coming back to - is that the race that built the Sphere eventually

evolved into The Borg. Furthermore, it would seem to be the modern Borg who fired the neutron star at it, perhaps wishing to erase the work of their "imperfect" ancestors. This theory is supported at the end, when a Borg cube is spotted watching events unfold, then warps away without attacking.

The novel also notes that the area around the Dyson Sphere has unusual subspace properties, properties that can only be found in one other area of space - the planet Sarpeidon, focus of the TOS episode "All Our Yesterdays". However, nothing further is made of that connection after its initial mention.

In the end, Picard and crew were able to

save a few species' arkships, but the Dyson Sphere itself narrowly avoided the neutron star and then shrunk away into subspace. The epilogue reveals that the Sphere and its inhabitants are still fine, but now smaller than an atom - apparently a self-defense mechanism of the Sphere's artificial intelligence system.

Note: It's also revealed that the star located at the center of the Dyson Sphere is not unstable as believed during the TNG episode, but rather is

being siphoned to provide enough energy for the Sphere to move. Therefore, the theory that it was abandoned because of an unstable star is proven false.

From a canonical point of view of TV shows and movies, the question as to who build the Sphere was not answered.

I do recall the Sphere being mentioned/used in Star Trek Online game detailing its history etc., but personally I hadn't played that part myself as of yet so I wouldn't know of the said details. That said, Star Trek Online is NOT considered canon.

In regards to the novel that deals with the Sphere... well, again, the pocket books (including the technical manuals) are NOT considered canon. But, the authors 'pet theory' which infers that the Borg's imperfect ancestors created it and then evolved into the Borg makes little sense.

For one thing, the Sphere's outer hull was made from Neutronium. Not even the Borg were able to create that material (which was said on screen by 7 of 9 - in Season 5 of Voyager, episode 'Think Thank). You would think that if the Dyson Sphere was made from Neutronium by the ancestors who 'evolved' into Borg, it would be the choice of material used in construction of Borg ships and uni-complexes by default - which would make them impervious to all conventional weapons (unless of course the Federation improved phaser technology to the point it can incur damage to Neutronium, which you'd expect in the 100 odd years since they encountered the Planet Killer in TOS which used the same material and gave Starfleet plenty of time to analyze it in detail), however, the Borg on the shows (specifically in Voyager) were mentioned to be using Tritanium in their hulls (both regular and Tactical cubes) and relied heavily on nanoprobes and collective 'willpower/intelligence/energy' to repair and adapt their ships. Janeway said that Starfleet theorized about making materials such as Neutronium but was not close in producing them... 7 of 9 answer to that was 'neither have the Borg'. If Neutronium was difficult to produce due to resource shortages, that's one thing... not having an ability to produce it though is another matter. Also, I doubt it would be impossible for the Borg to find needed resources in the Milky Way to produce enough Neutronium, especially with TW drives and highly advanced sensors.

No, from a canonical point of view, it does NOT appear that the Borg created it.

For all we know, the Sphere could have been created by the Iconians or another space-faring race.

In actuality, the Federation could have easily made its own Dyson Swarms around each Federation member world... although an actual sphere would not have been that much more difficult (and I disagree with Geordi's assessment that it wouldn't have been impossible - because the Federation technology is so far advanced that its not even funny), especially if each section of the sphere (made up of massive solar collectors) had fully integrated sensors, thrusters/impulse drives, transporters/replicators, etc. for self-replication). In the real world, we could have already started and finished construction of our own Dyson Swarm by the year 2000 (if we started construction in 1990) using fully automated construction bots and Mercury for raw materials. Because construction would be automated, it would proceed on an exponential pace (something which scifi shows and many writers apparently have a difficulty showing/comprehending).

Anyway, point remains that we can only speculate on which species might have created the Dyson Sphere we saw in TNG. There is no conclusive evidence on the subject matter. The only thing that comes close (at least hypothetically) is the Planet Killer (which was made out of solid Neutronium much like the Sphere was). And it was mentioned that it likely originated outside of the Milky Way (possibly Andromeda). It is possible that a species decided to come to the Milky way or has evolved in Milky Way, build the Dyson sphere, then left/evacuated to another galaxy and eventually built the Planet Killers too (who then found its way into Milky Way and started devouring planets during TOS).

Again, too little information. Any number of species could have developed Neutronium as a material and built the sphere given enough time, or if they just used AI to radically accelerate R&D (something which the Federation could/should do).

TOS explained that the Kelvans migrated from the Andromeda Galaxy because it was experiencing a sudden increase in radiation which would have made their species extinct in 10 000 years. They were also described to have been highly technologically advanced in comparison to the Federation of the 23rd century (probably/roughly on par with 24th century Federation given that the Enterprise-D was also stated in 'Where no one has gone before' by Data it would have taken just over 300 years to cross 2.7 million lightyears and get back to the Milky Way - putting at least their engine/Warp capabilities on par - which was of course completely discarded/forgotten by second season of TNG and later on by Voyager - or at least available/sustainable speeds were much lower than what was initially told).

Not the answer you're looking for? Browse other questions tagged star-trek star-trek-tng dyson-sphere or ask your own question.