Soldier teleports himself out of a tank using his mind; discovers he's from the future

I am looking for a book that I read many years ago as a teen. I think it was in the 1970's but the book could have been written earlier. It starts with a soldier in Korea in a tank that is hit by a shell, and he find himself miles away in a rice paddy having teleported himself there using his mind. Many years later he finds himself approach by a women who is trying to kill him and force him to teleport himself into the future where she is from. His car is run into the river, where he is drowning, and he places a small tube to his ear which gives him the coordinates to the future. He finds himself millions of years in the future outside a city where he fights the computer running the city to save mankind. He then teleports further into the future following the girl. Does anyone know the title of this book? 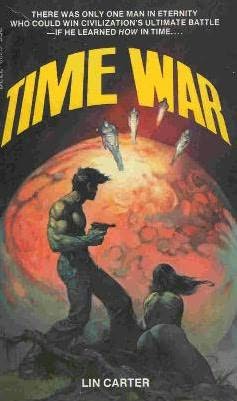 The Author's Note says "This book is an affectionate tribute to one of the great masters of science fiction, Mr. A. E. Van Vogt."

The protagonist is American, but he served as a "young tank commander in Korea". After having materializations happen in front of him, such as free-floating guns shooting at him and cars trying to drive him off the road, the protagonist John Lux goes to meet a friend of his, a psychologist named Dr. Havering. John is also visited by a woman, the Lady Lis, claiming to be from the future, who gives him the device that will transport him to the future, in an emergency. John must shortly use the device after fleeing the Silver Men - autonomous shapeshifting robots from the future.

There are so many parallels to A.E. Van Vogt's "The World of Null-A", from the protagonist going to a psychologist to find out what is wrong with him, to a mysteriously exotic woman, to a Weapon Machine engaged in a 10,000-year war against Arthex the Living City ruled by a computer caught in a logic trap. Our superman John Lux forces himself out of his self-made millionaire 1960s lifestyle into an unbeatable force against machine logic with fantastic weapons and bring about the Crisis Point of the Arcadian Age that the desperate time-travelers beg John to complete.

7
Pre-80's sci-fi book about a radionucleonic man who can see and affect the electromagnetic spectrum, and teleport in stressful situations

7
Pre-80's sci-fi book about a radionucleonic man who can see and affect the electromagnetic spectrum, and teleport in stressful situations
11
Story about a man whose mind is transported to the future into another person's body
16
Book about a “barren land” patrolled by monsters - surrounds a teleport, green disease
12
Book about a man that can teleport himself to places he has previously seen
6
old scify novel similar to “miss peregrine”?
9
Book series with teleporation tech, societal break down, and teenagers
15
Person falls into radiotelescope and his mind gets transported to the far future
8
Book: thief called Mar is hired by one of his targets to search the remains of an old civilization for magical artifacts; discovers he can do magic