Did Tolkien deliberately place the Battle of the Pelennor Fields on the Ides of March?

I am wondering whether the date of the battle was mere coincidence (I tend to doubt it) or intentional, and if the latter, whether Tolkien ever revealed the reason he chose to make the battle occur on this date. It could be as simple as "It is a date people commonly associate with bad stuff happening", but I certainly hope he had a better reason than that.

I found the answer in The Lord of the Rings: A Reader's Companion. No, it was not intentional. Tolkien realized, while he was writing, that Aragorn's ride to the Hornburg took place over too little time, and decided to move the Battle of the Pelennor Fields back a day to give him more time - the battle was originally scheduled for March 14. 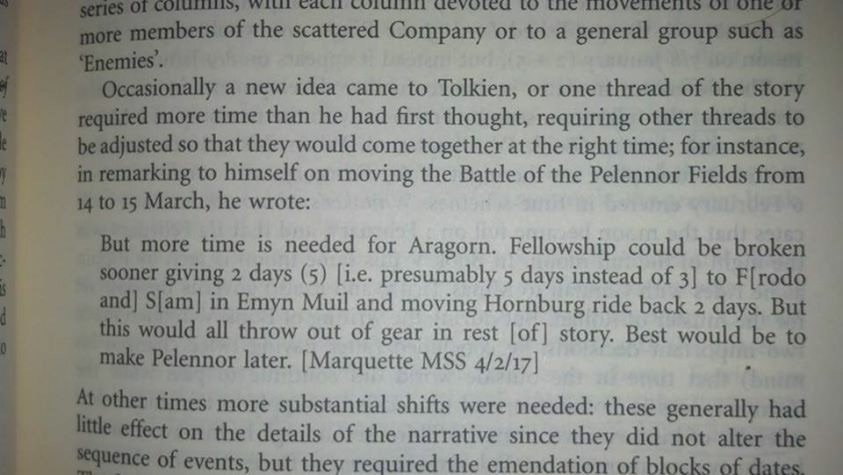 Text shown is from The Lord of the Rings: A Reader's Companion by Wayne Hammond and Christina Scull, p. xlv

Occasionally a new idea came to Tolkien, or one thread of the story required more time than he had first thought, requiring other threads to be adjusted to that they would come together at the right time; for instance, in remarking to himself on moving the Battle of the Pelennor Fields from 14 to 15 March, he wrote:

But more time is needed for Aragorn. Fellowship could be broken sooner giving 2 days (5) [i.e. presumably 5 days instead of 3] to F[rodo and] S[am] in Emyn Muil and moving Hornburg ride back 2 days. But this would all throw out of hear in rest [of] story. Best would be to make Pelennor later.

Not the answer you're looking for? Browse other questions tagged the-lord-of-the-rings j-r-r-tolkien tolkiens-legendarium or ask your own question.

9
Did the date of Frodo's rescue out of the fire of Mordor have any particular meaning in The Lord of the Rings?
5
How clear is it that Tolkien chose the 25th of March for the downfall of Sauron because of its Christian significance?