You can't wield Mjolnir unless you're worthy, but has anyone ever stopped Thor from wielding it?

The mighty hammer Mjolnir has a special enchantment placed on it by the uber-Asgardian, Odin:

Whosoever holds this hammer, if he be worthy, shall possess the power of Thor

which means that you have to be "worthy" in the eye(s) of Odin to use the hammer.[1].

The most notable wielder of the hammer is our very own Avenger, Thor#, with some others shown to have been worthy through the years[2].

You can't wield Mjolnir if you're not worthy yourself, but Is it possible to stop Thor from wielding his hammer?^. i.e. Can you stop the hammer from going to Thor?

# Give or take an instance or two where he's unworthy, and then proves that he's worthy after all.

^ I don't mean making Thor unworthy, by doing something like, corrupting him or something, but can someone physically stop Thor from grabbing his hammer, without holding his arms or anything?

In the Marvel Comics Magneto is able to stop the flight of Mjolnir using his magnetic repellor field, so it is possible to prevent Thor from wielding the hammer.

And just as Magneto says, the flying hammer suddenly stops, held by a power beyond mere description! 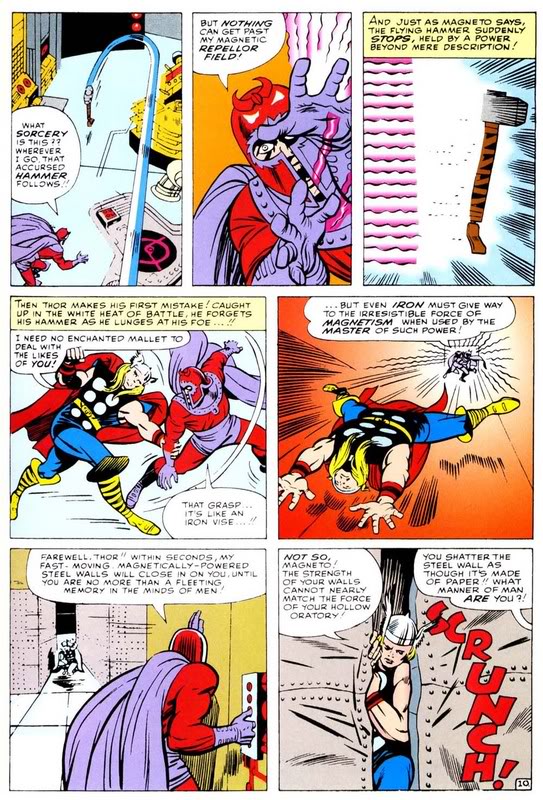 But I'm not sure whether this qualifies as physical, which you asked for.

Beta Ray Bill is a non-Asgardian who has wielded Mjolnir and actually wrestled with Thor over control of it. He ended up getting his own hammer called Stormbreaker I believe it was called. But he stopped Thor from wielding it by wielding it himself, if that answers the question

Conveniently enough, this has happened a couple of times in the current run of Thor. In issue #2, Mjolnir gets trapped in a room that has vibranium core with adamantium-plating walls (the room is a vault that also has magical wards on it, but those don't seem relevant). It's unable to break through the door, but it tries and tries. In issue #7, the Destroyer (which was remoted controlled) grabs the hammer, and attacks her with it.

In the Marvel Cinematic Universe, the closest we get to this is in Thor: The Dark World. During a battle with Thor, Kurse knocks Mjolnir away as Thor is calling it to him.

In Age of Ultron, we see Quicksilver in hyperspeed watching the hammer fly by in slow motion. He then tries to grab it (for whatever reason) which he probably thinks would stop the flight. Instead when he grabs the hammer, it takes him with it.

This is one point that could prove, that no lifeform could in any way affect Mjolnir's flight, or position (it cannot be moved or stopped).

The only way i can think of is Vibranium. Captain America was able to withstand a punch with Mjolnir by blocking it with his Shield (with catastrophic effect). So building a vibranium case around Mjolnir could do the job. Since it's a rare metal it would be very difficult though, since when the hammer is called, the vibranium case would fly with it.

Apart from cutting off Thor's hands (see the Dark World), killing him or paralyzing him, i think there is no "physical" way of stopping Thor to wield his Hammer.

There is an old comic where Thor is being mind controlled. He fights Captain America and is astounded that a mere mortal is so tricksome. Captain America gets Thor to throw his hammer and he deflects it by throwing his shield! Thor tries to get his hammer back (not sure why it doesn't return to his hand) but Cap keeps interfering. Tripping Thor etc. Until the old Curse triggers. The Curse being that if Thor doesn't hold Mjolnir, he changes back into his human form of Donald Blake (A curse from Odin to teach his son humility). Thor is then knocked unconscious by a shield slam from Cap! Cap then says ,"I always wondered why Thor never let his hammer around, considering no one can lift it. He never imagined that Thor would have such a weak alter ego"

10
Which MCU characters are shown to be worthy of Mjolnir in the comics?

54
How does Mjolnir determine 'worth'?
23
Is "if he be worthy" in Mjolnir's spell gender-sensitive?
10
If Thor does not hold Mjolnir, but he is worthy, does he possess the power of Thor?
11
Thor: Which was named first, the power or the demigod?
22
If Mjolnir was made for Thor, why is Hela seen using it in Thor: Ragnarok before it was even given to him?