Young Adult Fantasy novel about some boarding school, classmates dying, and passing on?

This isn't science fiction, but it's kind of "fantasy" in a way.

It's about some girl who gets sent to/starts to attend some sort of fancy boarding school or something like that. I know she falls for a classmate and they sneak out on a sort of a date, even though they're not allowed. I remember that the plot of the book had something to do with a strange coin or medallion being found, whereupon classmates start disappearing. It ends up that these classmates are dying/are already dead (I can't remember) and I think are passing on to the afterlife. The female main character eventually figures this all out in like the last 50 pages of the book, and she encounters whoever is in charge, maybe of the River Styx.

I think she argues with him while coming to terms that he controls the River Styx, and that she's been dead the whole time or something like that. It came out in the last five years, and was certainly a young adult novel. I remember lots of people liking it but being frustrated that the entire novel basically happens in the last 50 pages; the rest is build-up. I think the cover was purple, with silhouettes.

Someone help, I want to read it again or at least remember the name or author to find it. Thanks!

story-identification novel young-adult
Share
Improve this question
edited May 26 '15 at 14:35

The Last Academy by Anne Applegate 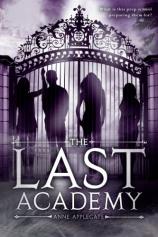 Camden Fisher does not know why she is being sent to boarding school. She was never one of those kids that had trouble at school, who needed a different environment. Yet here she is, standing on the manicured grounds of Lethe Academy. At first, Camden’s life seems hopeless; her roommate hates her, her former best friend still haunts her and Barnaby Charon, the creepy board member at Lethe Academy, seems to be watching her.That's not all. One night, Camden’s friend Jessie goes missing, yet none of the teachers are concerned. With the help of Nora, Camden’s friend, and Brynn, one of the most popular girls at school, Camden begins slowly piecing together the story of her friend’s disappearance. One fact the girls are sure of? Barnaby Charon had something to do with Jessie’s disappearance. Just when the girls begin to think they have it all figured out, something changes everything they thought. Soon, Camden is alone in uncovering the truth about what happened to Jessie, and what happened to her as well.

Could it The Blythewood Tales, by Carol Goodman (or a sequel)?

At seventeen, Avaline Hall has already buried her mother, survived a horrific factory fire, and escaped from an insane asylum. Now she’s on her way to Blythewood Academy, the elite boarding school in New York’s mist-shrouded Hudson Valley that her mother attended—and was expelled from. Though she’s afraid her high society classmates won’t accept a factory girl in their midst, Ava is desperate to unravel her family’s murky past, discover the identity of the father she’s never known, and perhaps finally understand her mother’s abrupt suicide. She’s also on the hunt for the identity of the mysterious boy who rescued her from the fire. And she suspects the answers she seeks lie at Blythewood.

But nothing could have prepared her for the dark secret of what Blythewood is, and what its students are being trained to do. Haunted by dreams of a winged boy and pursued by visions of a sinister man who breathes smoke, Ava isn’t sure if she’s losing her mind or getting closer to the truth. And the more rigorously Ava digs into the past, the more dangerous her present becomes.

What Ava discovers at Blythewood is both fantastical and horrifying, and she will never see the world in the same way again; many students when confronted with the truth decide to leave Blythewood forever, but Ava is obsessed with discovering the truth about what happened to her mother and the many students who have disappeared from the woods outside the school.

I found the answer on another site: it was "The Last Academy" by Anne Applegate, released in 2013.

7
Fantasy (I think) about afterlife where you live your life backwards after dying?
7
YA fantasy book - boy in boarding school?
5
Graphic novel with red - headed girl at a magic boarding school
4
Trying to find a YA novel I once read about a god who takes incarnations in a country based loosely on Ancient Greece and Egypt
6
Novel about a girl who dreams the deaths of her classmates
10
YA fantasy about a young boy and a telepathic sword he encounters
9
Young adult fantasy trilogy with a large symbol and coloured background
4
90s young adult novel: young girl in a boarding school where some students are actually werewolves
7
YA fantasy novel: "Vampires" (Blood suckers) at a boarding school, girl lives in a forest
4
90's Young adult fantasy novel with a shapeshifter character with purple/violet eyes