Did Tolkien ever write that Sauron killed Shagrat?

Many wiki entries, as well as many other sources about Shagrat (one of the Orc captains who captured Frodo outside Shelob's lair) say he was killed by Sauron shortly after Frodo's escape.

In the text, we hear Shagrat and Gorbag griping about their bosses, and reminiscing about old times. A little later, we learn that shortly after this conversation, Shagrat killed his old buddy Gorbag for trying to steal Frodo's stuff, and that is the last we hear about either of them.

According to the wikis, however, Shagrat took Frodo's mithril shirt and some other possessions to Barad-Dur, turned them over to Sauron, and was immediately killed for letting the prisoner escape. This would obviously explain how the Mouth of Sauron obtained these items, which he later presented to the Captains of the West in front of the Black Gate.

But I can't find any direct quotes from Tolkien himself on this subject. It certainly isn't surprising that Sauron, who isn't a very nice guy even on his best day, would kill his servants for allowing a supposed "spy" to escape. In fact, it almost seems inevitable that Sauron would have killed him for his perceived failure. But I want to know what Tolkien himself had to say about it.

So did Tolkien himself ever discuss Shagrat's ultimate fate?

He wrote this in a time scheme, a device used to keep track of when events are happening relative to each other. The Tolkien Society of St. Petersburg hosts a picture of one page of the scheme: 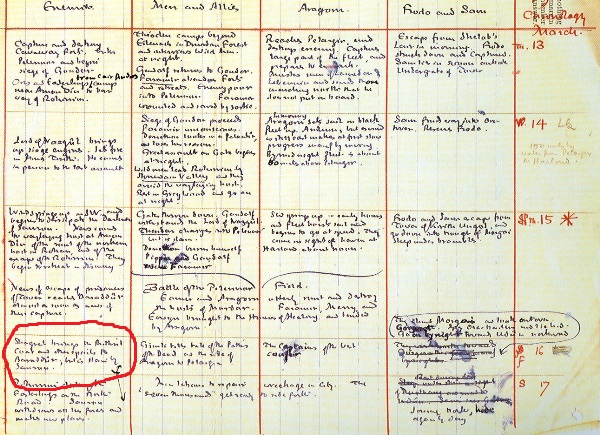 In the circled cell, Tolkien appears to write:

Shagrat delivers [possibly "brings"] the Mithril coat and other [indecipherable; possibly "spoils"] to Barad-dûr, but is slain by Sauron.

The original document is most probably in the Marquette University collection, in Milwuakee, Wisconsin; either MSS-4 Box 2 Folder 17: "Time Schemes" or Folder 18: "Synoptic Time-Scheme and related mss.". Any SFF users in Wisconsin who are able to visit and see the original and confirm/improve my (shaky) transcription will have my eternal gratitude. BMWurm led an initiative to do so based on this image, so you can head over there if you're curious about the rest of the text.

The first two sources that you linked to had cited The Lord of the Rings: A Reader's Companion as their source, and even included a page number.

Looking up this reference will show the following entry in The Reader's Companion.

925 (III: 203). Not to your precious Shagrat. He won’t be captain any more. - Both The Tale of Years and Scheme state that on 17 March Shagrat brings Frodo’s cloak, mail-shirt, and (Sam’s) sword to Barad-dur. Scheme adds that he is slain by Sauron.
The Lord of the Rings - A Reader's Companion page 608

Elsewhere in the book, such as in the preface and index, "Scheme" is defined as a reference to Marquette Mss-4/2/18, the fifteen-page synoptic time-scheme, that Tolkien made of the entire book.

Hammond and Scull's decision to paraphrase from the scheme instead of quoting from it here was likely influenced by the fact that a facsimile of this page of the timeline was previously published a year before in The Invented Worlds of J.R.R. Tolkien: Drawings and Original Manuscripts from the Marquette University Collection.

The Invented Worlds of J.R.R. Tolkien: Drawings and Original Manuscripts from the Marquette University Collection page 37

Twelve years later, William Fliss, the archivist of the Marquette University Tolkien collection that includes this manuscript, discussed it in a paper, and included his transcription of the passage.

The time-scheme is a gem because it includes information that does not appear anywhere in the published story. For those of you wondering about the fate of Shagrat, Orc Captain of the Tower of Cirith Ungol, the scheme states that on Saturday March 17th, “Shagrat brings the mithril coat and other spoils to Barad-dȗr; but is slain by Sauron” (Tolkien MS. Mss-4/2/18).
Fliss, William M. (2017) "“Things That Were, and Things That Are, and Things That Yet May Be”: The J.R.R. Tolkien Manuscript Collection at Marquette University," Mythlore: A Journal of J.R.R. Tolkien, C.S. Lewis, Charles Williams, and Mythopoeic Literature: Vol. 36 : No. 1 , Article 3.

55
What is the timeline for The Lord of the Rings trilogy?
49
Do we know anything about Aragorn's first time in Moria?
26
Did Gandalf think that Frodo was dead?
19
Does a transcription of Tolkien's handwriting in this image exist?

50
What age group did Tolkien write The Hobbit for?
51
Did JRR Tolkien ever write any music for the many songs in The Lord of the Rings?
11
What did Tolkien write regarding Elvish succession?
35
How had Saruman "cheated" Sauron?
48
Why did Sauron react the way he did when Frodo put the Ring on inside Mount Doom?
23
How much did Tolkien write about the connection between WWI and his work?
18
Did Tolkien originally intend to write a very different Lord of the Rings?
19
Was Gollum evil?
9
Did Tolkien ever discuss his views of heroism?
19
Are Shagrat and Gorbag really talking about "the old days" from personal experience?