Does Superman's Heat Vision have a Maximum Range?

Does something have to be within Superman's line of sight to hit it? Or can he just look out into the cosmos and shoot heat vision beams that cross the universe?

According to one source, the answer is

about 6 panels. give or take

I'm wondering if there is a unit of measurement more commonly used by humans.

This question How does Superman's heat vision work exactly? doesn't seem to be asking the same thing.

I read "how far can he expand his heat vision?" to mean an area of effect, rather than a question of distance.

We can safely assume that Superman's heat vision moves at the speed of light, meaning that shooting across the cosmos would involve some delay for the light to get there.

But otherwise, it's just a matter of how focused the beam is: perfectly focused and it will continue forever. But if it's even slightly unfocused, it will gradually get dimmer as the distance increases, the way the brightness of a flashlight diminishes over distance, because the light cone has gotten wider.

So how focused is Superman's heat vision? Not very, under most circumstances. Most often, it's depicted as a rapidly widening cone, starting at eye-width but growing to several feet across by the time it reaches the opponent, even at close range. 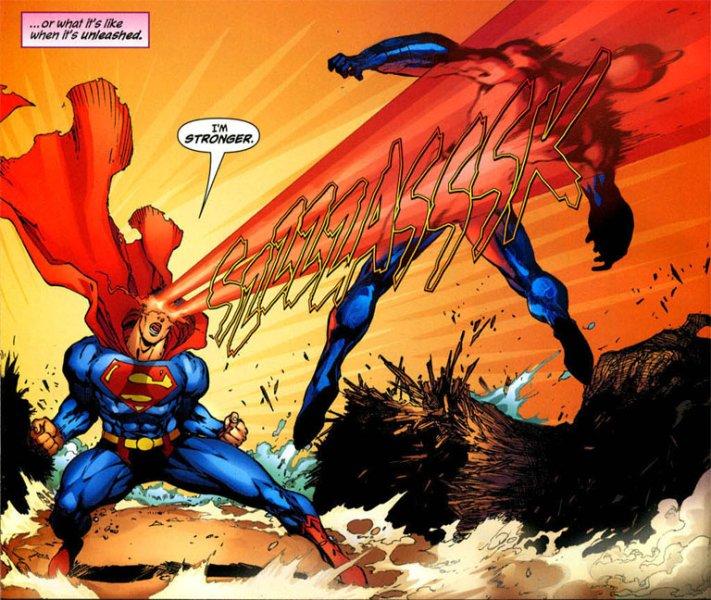 That being said, Superman seems to be able to deliberately control how focused the beam is at any given time. He's routinely shown making fine, precision cuts with his heat vision, such as during emergency surgeries, and perhaps most famously when he lobotomizes supervillains during one of his many "dark Superman" arcs.

In those moments, the scars are often even smaller than Superman's eyeballs, indicating that the heat vision beam had narrowed during its path before reaching their foreheads.

If he's capable of a widening cone and a narrowing cone, odds are he's capable of a focused beam. It might take a lot of concentration to focus it so perfectly that it could remain focused across light-years...

...but this is Superman we're talking about. He can do it.

In Superman Man of Steel #112, Superman and Krypto bounce "low intensity" eye-beams off the surface of the moon, some 384,000km from Earth. 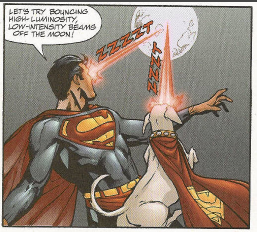 Superman's heat-vision functions as a line-of-sight beam (like a large powerful laser). That being the case, I can't see any obvious reason why it would have a maximum range once it left the Earth's atmosphere, aside from any interaction with interstellar dust.