I can't remember the name of the movie or really what it's about. I just remember bits and pieces. I think it was an older movie I watched back in the 90s. It was a fantasy movie with beautiful lands and forest and seas and I think I remember leprechauns.

One thing that keeps standing out to me is that there was a ship with a scary/intimidating fish or sea creature on a wall or in a case on the wall of the ship. The creature was golden with big teeth.

Are you looking for this guy? 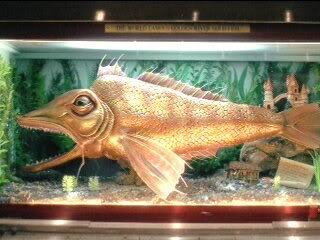 If so, the movie is The 10th Kingdom. It was a miniseries that aired in the US in 2000. I don't remember leprechauns specifically, but there are dwarfs (including a brief appearance by Warwick Davis). The movie is halfway between a send-up of and an homage to classic fairy tales.

The fish above is hidden on a small boat, behind a secret door belowdecks. There was a lot of time spent outdoors in the movie, and there were a few notable scenes in forests.