Was Miss Trunchbull a murderer?

She used cruel punishments on the students in her school. She kept Miss Honey in slavery throughout most of her childhood, forcing her to do all the housework. When Miss Honey has grown up, Miss Trunchbull stole her wages, and borrowed her inheritence.

But the book suggests one more possible crime to top this.

[…] Miss Honey said, hesitating, “You see, no one could believe that he [Miss Trunchbull's brother-in-law, Magnus] would ever have done it. He was such a very sane and sensible man.”

Matilda was stunned. “Did he?” she gasped.

“That's what it looked like,” Miss Honey said. “But who knows?” She shrugged and turned away and stared out of the tiny window.

“I know what you're thinking,” Matilda said. “You're thinking that the aunt killed him and made it look as though he'd done it himself.”

“I am not thinking anything,” Miss Honey said. “One must never think things like that without proof.”

Do we ever find out, from the novel or from other sources, whether Miss Trunchbull has indeed killed her brother-in-law?

According to this article in Time Out Magazine, Roald Dahl's widow explicitly confirmed that Miss Trunchbull was a murderer. The clear implication is that she did indeed murder Magnus.

‘In the first draft, I probably enjoyed Miss Trunchbull too much. Roald Dahl’s widow was really supportive, but she said “You must remember Miss Trunchbull is a murderer.” She was right – you’ve got to keep a bit of darkness there. I wasn’t sure about having a man play Miss Trunchbull in case she wouldn’t feel genuinely scary. But when I saw a bloke playing her in workshops, I was converted.

Although I can't find a direct source from the book to back this up, we're left in little doubt. When Matilda makes the chalk write, Miss Trunchbull is initially shocked but not actually terrified. It's only when "Magnus" makes specific allegations ("I will come get you like you got me") that she collapses in fear. 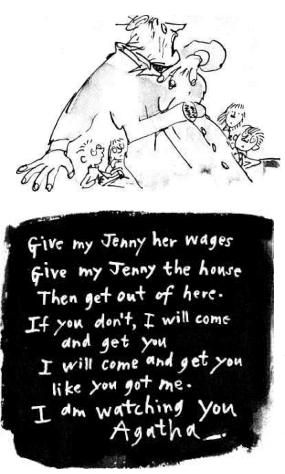 "What the blazes is this?" yelled the Trunchbull. It had shaken her to see her own first name being written like that by an invisible hand. She dropped Wilfred on to the floor. Then she yelled at nobody in particular, ''Who's doing this? Who's writing it? The chalk continued to write.

Everyone in the place heard the gasp that came from the Trunchbull's throat. "No!" she cried, "It can't be! It can't be Magnus!"

Miss Honey, at the side of the room glanced swiftly at Matilda. The child was sitting very straight at her desk, the head held high, the mouth compressed, the eyes glittering like two stars.

For some reason everyone now looked at the Trunchbull. The woman's face had turned white as snow and her mouth was opening and shutting like a halibut out of water and giving out a series of strangled gasps.

The chalk stopped writing. It hovered for a few moments, then suddenly it dropped to the floor with a tinkle and broke in two.

Not the answer you're looking for? Browse other questions tagged matilda or ask your own question.