Does the Terminator replace its skin after showing Miles Dyson its hand?

In order to get Miles Dyson to fully comprehend the 'Sarah just tried to murder you' situation and the reasons for doing so, John hands the Terminator a switchblade and instructs him to "Show 'em". The Terminator proceeds to cut off the skin/tissue coating of its arm & hand in order to reveal the endoskeleton underneath.

Now it would make sense from a longevity point-of-view to try and maintain the skin cover for as long as possible.* We know The Terminator's long-game plan was to skip town with John and avoid further confrontation with the T-1000: numerous times it warns John (and later, Sarah) that the actions they planned to take would be anticipated by the T-1000.

I seem to recall after revealing its hand, the Terminator was wearing gloves after this scene, but we also know that Terminator tissue heals quickly:

Is there any evidence that the Terminator replaced the skin after the reveal?

* They certainly didn't know at the time that the Terminator would be dead that night anyway.

In the "Show 'em" scene, the T-800 holds John's knife in its right hand and cuts the skin and flesh from its left, revealing its robotic "hand" and forearm: 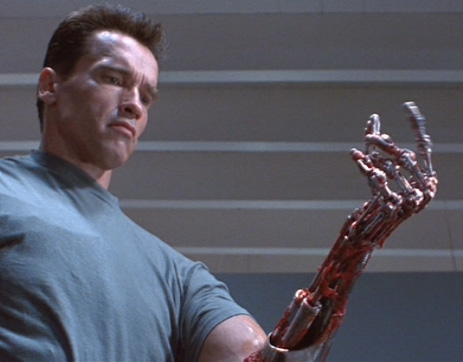 After the T-800 is temporarily disabled by the T-1000 in the first face-to-face confrontation between the two in the steel mill, its arm is partly crushed and torn off. The extent of the damage seems to vary from shot to shot, but it's undoubtedly the left arm: 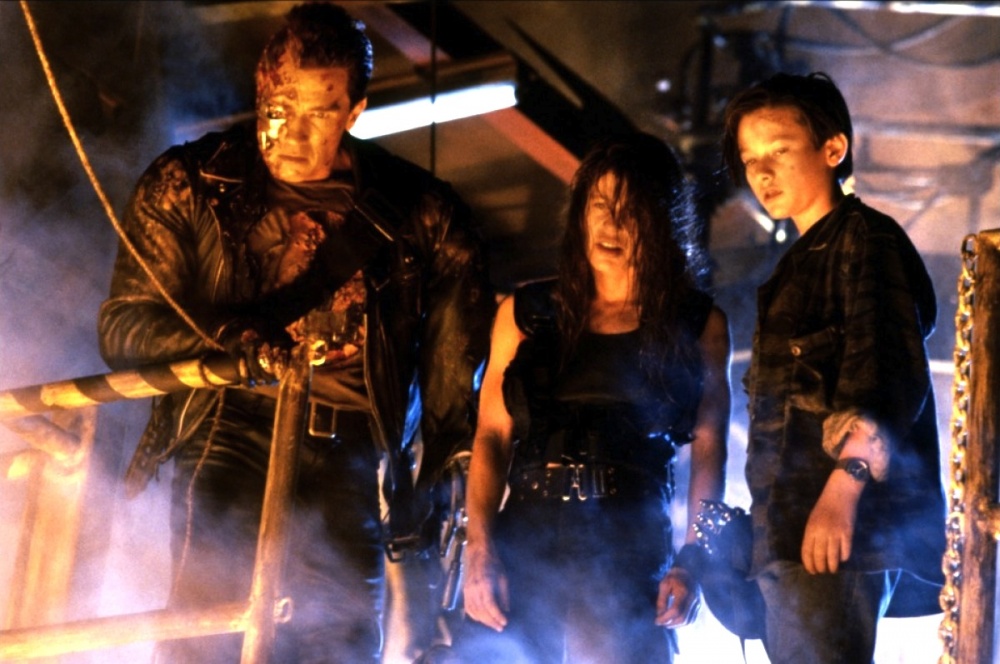 In the following shot the flesh of the left arm seems to be neatly removed in a circumferential cut just below the elbow, which is more or less where the T-800 made the initial cut with John's knife earlier:

If any of the flesh had grown back between the "Show 'em" scene and the climax in the steel mill, presumably the exposed edge of the skin would not look so neat (in part because any flesh newly attached to the endoskeleton would probably have been torn away by the machine that crushes the T-800's hand). I think we can safely conclude that the T-800 didn't grow back the flesh of its left hand and forearm between leaving the Dyson family's house and the showdown with the T-1000 in the steel mill.

I speculate that the T-800 would have been able to regrow the lost organic tissue given enough time, but either the few hours (at most) that elapse in-universe between the two scenes was not long enough for any appreciable regeneration to occur; or the T-800 was, by design, able to manipulate its "metabolism" and deliberately suppress the healing process in order to maximize the energy available to fulfill its primary mission objective--saving John Connor from the T-1000.

12
Does Terminator 3 undermine the 'No Fate' concept?
10
Why didn't the T-1000 kill the helicopter pilot?
15
How did the police learn that John Connor's foster parents had been killed?
9
Can a Terminator feel affection?
5
When does Sarah Connor begin to trust the Terminator?
8
Did John Connor continue to wear the detonator locket switch after Today Is The Day?
2
How does the T-800 find Sarah at the police station?