Are the Hobbit names translated when translating LOTR in other languages

When reading LOTR in my native language (Bulgarian) I noticed that the Hobbit names were translated too. For example Baggins was translated by taking the root of the name - bag - and using the corresponding Bulgarian word. Same applies for other names and/or nicknames like Strider or even Gollum.

Yes to both your questions.

The Guide to the Names in The Lord of the Rings is a guideline on the nomenclature in The Lord of the Rings compiled by J. R. R. Tolkien in 1966 to 1967, intended for the benefit of translators, especially for translations into Germanic languages. The first translations to profit from the guideline were those into Danish (Ida Nyrop Ludvigsen) and German (Margaret Carroux), both appearing 1972.

The Danish (Ludvigsen) and German (Carroux) translations were the only ones profiting from Tolkien's "commentary" to be published before Tolkien's death in 1973. Since then, throughout the 1970s, 1980s, 1990s and 2000s, new translations into numerous languages have continued to appear.

I can tell you about the Italian translation, a lot of names were changed.

Yes, some Hobbit names are translated in foreign language editions of "The Lord of the Rings".

The (deservedly) highly regarded Spanish translation by publisher Minotauro does some strange things with Hobbit names. Some are translated, like Samsagaz Gamyi ("sagaz" = "wise", "Gamyi" is a Spanish phonetic spelling of Gamgee) or Frodo Bolsón (a loose translation of "Baggins"), but others such as Merry or Pippin are not. Likewise, some place names get (half-)translated, such as Oesternesse for Westernesse ("Oeste" = "West" in Spanish).

These oddities aside, the translation is awesome.

One time, an Orc, a Troll, and Gollum met in a dale. The other two are asking the Orc: who are you? He goes "I'm a hobbit". They ask the Troll, who he is. "I'm a hobbit". The ask Gollum the same. "Hobbitses". "So...why are we all so different?" - "Because we are from different translations".

Or, more ontopic to Bilbo's name (bonus points if you get the Tolkien point of the joke):

Once, four hobbits stopped at the border of two translations. One says to the others: " Remember, from now on I'm not a Torbins anymore! If anyone asks, I'm a Baggins!" (Note: "Torbins" is a pretty close idiomatic translation of "Baggins", from old Russian "Torba"=="Bag")

I will just shortly add a note for Czech. As for the first question, I think this is more or less the same situation as in Your case. The translator used his "common sense" - some names are just slightly modified to better fit Czech pronunciation (Gollum -> Glum, Hobbit -> Hobit and so on). Surnames are commonly translated (Baggins -> Pytlík - "pytlík" is a little bag). Note exhaustive list is in dictionary. As for the second question, I don't know, but if I can compare with situation in Pratchett's books, the translator said he discussed those issues with the author, but as the author didn't speak Czech, he had to finally trust the translator...

In German not only the names are translated, but also the areas and other names.

The problem we have with German is that many creatures have names, but are quite distinct in mythology and folklore. Elf, Elb and Alb are all the same names for fairy creatures in German which are quite unlike Tolkien's elves. Dwarves, well, they are a bit like Tolkien's counterparts, but they could also use magic in folklore. Given that, the German translator simply used Bilwiß (a kind of demon) as translation for goblin.

As bonus here "the" standard green Klett-Cotta German edition with the Carroux translation. It is one of the most used and oldest versions, unfortunately it misses all appendices except Aragorns death. 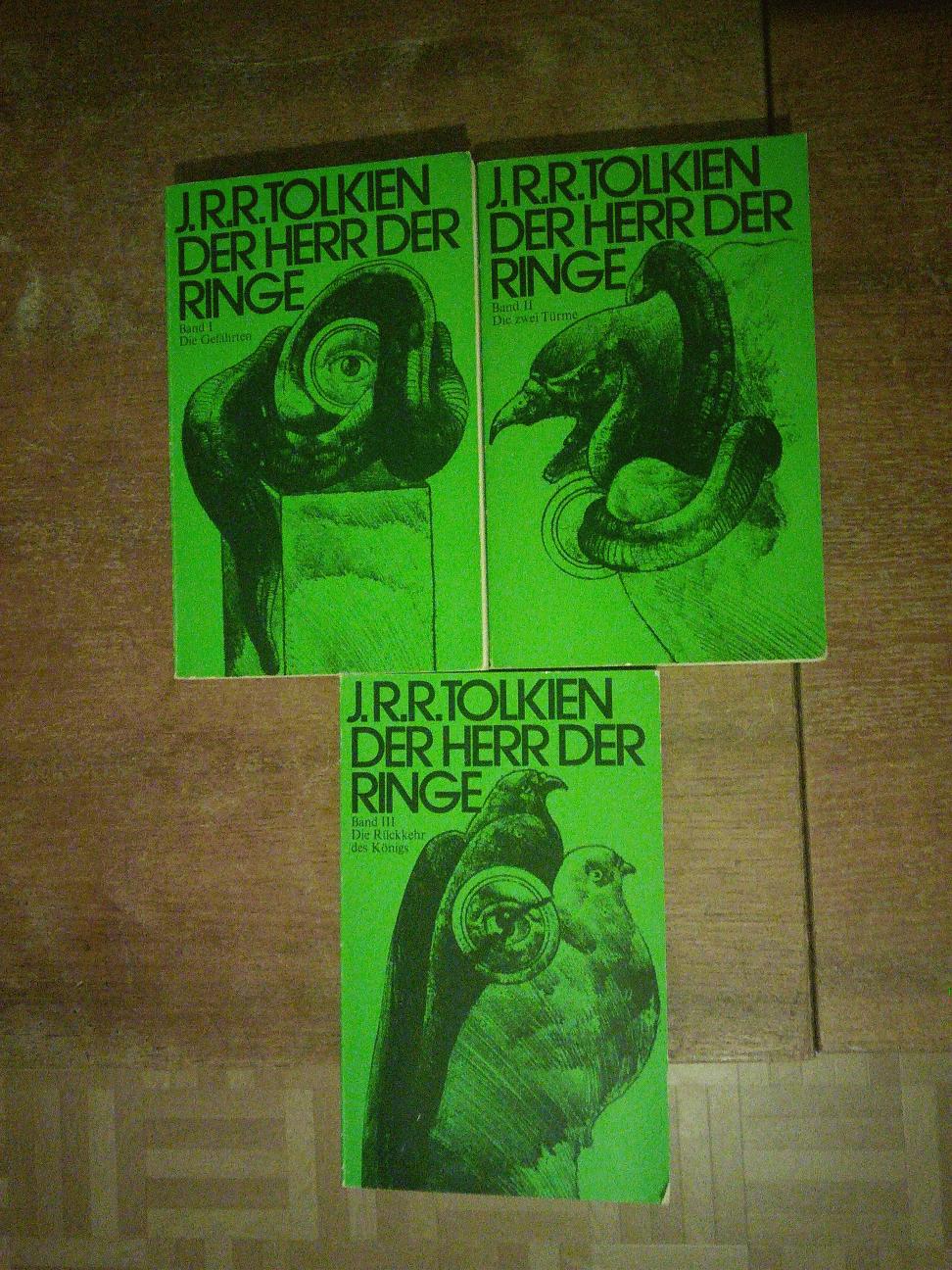 Addendum: The Hobbit has several translations (mostly because it is thought as a children's book, e.g. from Wolfgang Krege and Juliane Hehn-Kynast). The version I read was published in 1974 from dtv junior (it has a dragon with blue butterfly wings...yeah, you read that right), so it is very possible that the translation was a bit mangled.

In Portuguese (Brazil) there are lots of things that are left untranslated and those who are actually keep their meaning, here are some of those

Names as Minas Tirith, Barad-dûr and such aren't translated.

Not the answer you're looking for? Browse other questions tagged the-lord-of-the-rings tolkiens-legendarium translation or ask your own question.

14
Are the Middle-earth languages spoken in the LOTR/Hobbit films faithfully pronounced from the texts written by Tolkien?
5
Meanings of the names in the Hobbit and LOTR?
5
Are there any orc names mentioned in LOTR movie trilogy?
16
Will there be another book/movie about The Hobbit / LOTR?
7
What is the origin of the wargs, and are they featured in any of Tolkien's works other than LOTR and the Hobbit?
1
How was music handled in The Hobbit / LOTR novels?
13
What was the basis for Tolkien's Westron?