Were the Jedi ever publicly accused of exploiting the clones?

The creation of the clone army was orchestrated by the Sith, but the Jedi seemed to show no qualms about using this army of clones genetically modified for obedience and bred for the sole purpose of fighting and dying for the Republic (and, by extension, the Jedi). The Jedi are generally considered to be the "good guys" of the Star Wars universe, but this use of the clones is arguably a major moral flaw on the part of the Jedi.

I know of one case in which the Jedi were accused, in-universe, of exploiting the clones: a clone sergeant nicknamed Slick betrayed the Republic by working for the Separatists, and at one point berated Anakin Skywalker and Obi-Wan Kenobi of using the clones as slave labor:

Rex: "And all you had to do to get it was put the rest of us all at risk."

Slick: "I...I love my brothers! You're too blind to see it. But I was striking a blow for all clones!"

Cody: "If you loved your brothers, you wouldn't have put them at risk."

However, Slick's accusation was not made in a situation in which the general public would hear the charge (e.g. in the Senate or to the media), so in that case the Jedi did not need to justify their use of the clones to the general public. Even though Anakin and Obi-Wan were present when Slick accused the Jedi of enslaving the clones, neither Jedi bothered to defend the Order -- they left clones Rex and Cody to respond to Slick.

Owing to the obedient nature of the clones, there aren't a lot of cases where a clone expressed a desire to leave the service of the Republic. Aside from Slick, I only know of the deserter Cut Lawquane. But surely the Republic and the Jedi knew there was a possibility that a clone would not want to serve, in which case they would need a policy on handling such situations. Moreover, the validity of any clone's consent to serve is questionable given that clones are genetically modified for obedience and raised from birth for the sole purpose of serving in the Grand Army.

Were the Jedi ever publicly accused of exploiting the clones? If so, how did the Jedi attempt to justify their use of the clones? Did the Jedi have a policy that clones who wished to stop serving in the Grand Army would be permitted to do so? Note: Answers from Legends are acceptable, though I prefer canon answers.

[Further background reading]: Out of universe, the Jedi have been accused of exploiting the clones at least twice. The Clone Wars director Dave Filoni questioned the Jedi use of the clones as part of a discussion on Slick's character:

It is one of the things I think is an issue in the Clone Wars, is how can the Jedi Knights use these people as a military, knowing they're basically bred for combat? And this doesn't sit well with Slick; he doesn't see it evidently as being an honorable soldier, like Rex does. I mean, Rex is the good soldier; Rex and Cody, they're very loyal, very honorable. They have all the qualities that I think a hero has, and yet Slick sees them more as, you know, cannon fodder.

The Jedi were criticized more harshly by Star Wars author Karen Traviss, responding to the question "Is it true you hate Jedi?" on her blog:

But once you're past the age of puberty and you start arguing passionately with me that the Jedi were right to accept a slave army of cloned human beings and use them in war, and cloned humans aren't proper humans like us, and it was too bad the clones died, and the Jedi had no choice - well, sweetheart, I want to run a mile from you. Not the Jedi, who - just to remind you - are a figment of various writers' imaginations, just like the clones. You. If I see that you really mean it, and you're making excuses in your own mind for the Jedi just following orders on that delicate point, then you scare the living crap out of me. For real.

Traviss goes on to say that if you support the Jedi use of the clones in this way, then you are thinking like a slave-owner and/or Nazi for considering the clones less than human.

The canonical reference book Star Wars Propaganda: A History of Persuasive Art in the Galaxy features some in-universe anti-Jedi propaganda focused in part on cloning. 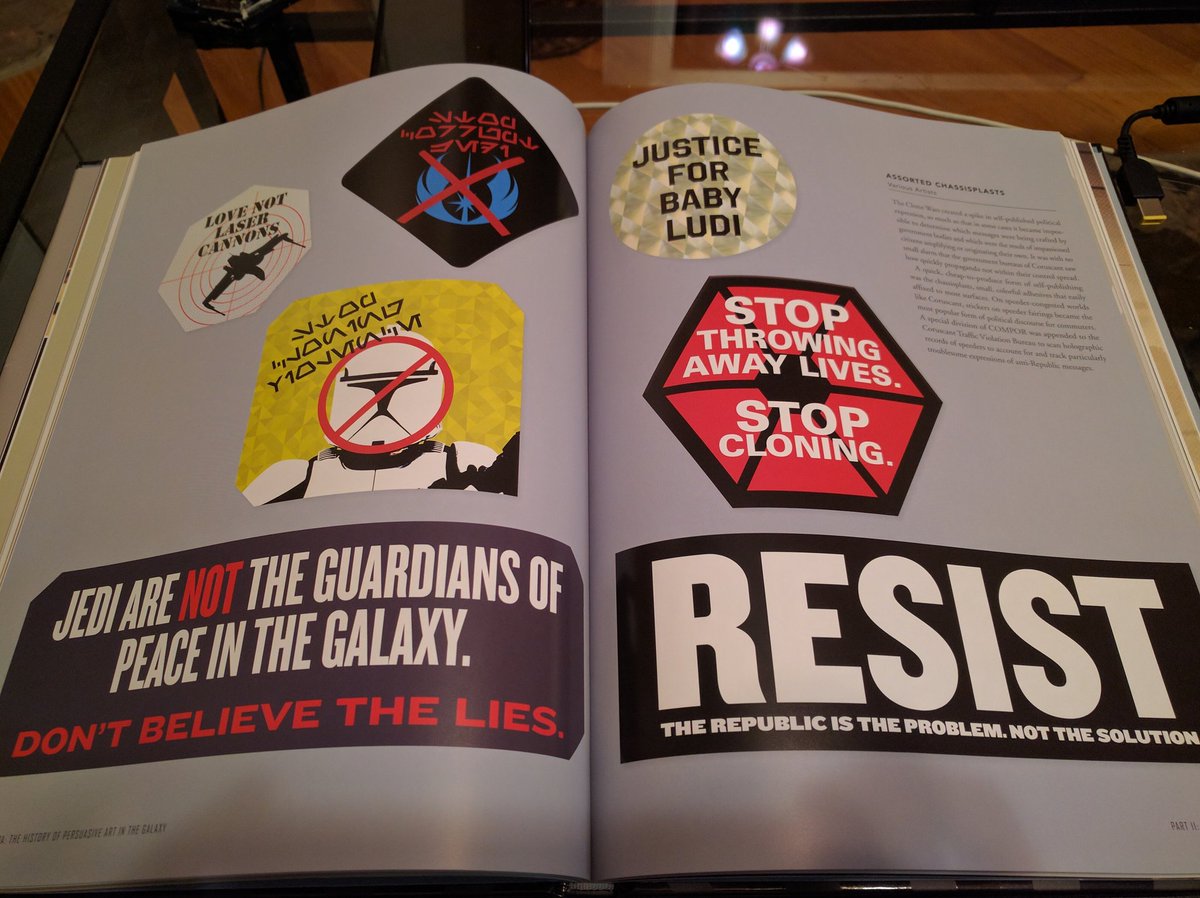 We see some protesters expressing a similar sentiment in The Clone Wars episode "Sabotage." 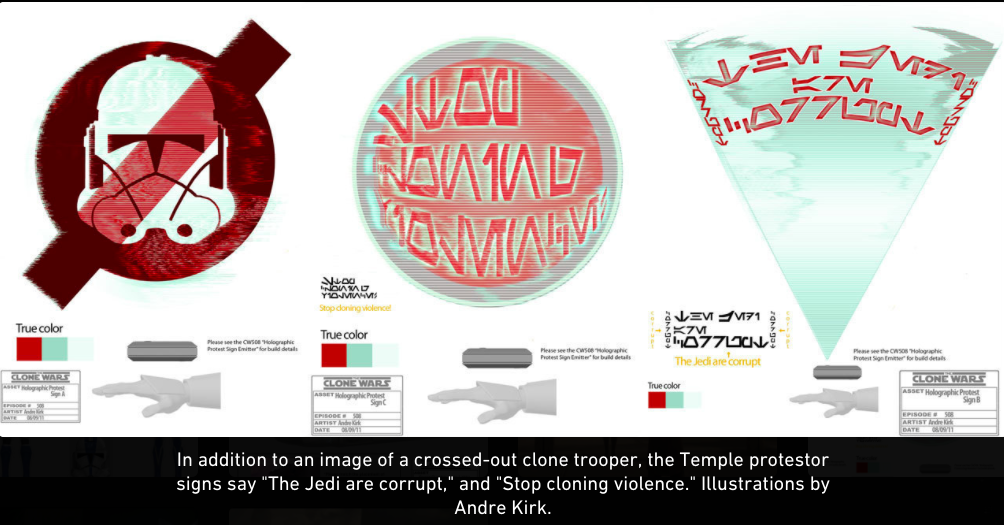 Senator Den Skeenah berated the Republic as a whole (including the Jedi) for their mistreatment of the clones in Legends novel Republic Commando: True Colors.

We have laws on how we treat sentient species. We have laws on how we treat animals and semi-sentients. We even have laws protecting plants. But we have absolutely no laws whatsoever governing the welfare of clone troops—human beings. They have no legal status, no rights, no freedoms, and no representation. Every one of you here who accepted this army without murmur should hang your head in shame. If that's the depths we as a Republic can sink to in the name of democracy, it hardly surprises me that the CIS wants to break away. The end can never justify means like this.

Unfortunately, I can't find any Republic or Jedi response to this. The passage doesn't actually occur in the main narrative, but is used as a relevant quote at the beginning of a chapter.

It's never made explicably clear what happens to clones who want to leave, but it's clear that freely leaving is impossible and that desertion is a grave offense.

From The Clones Wars episode The Deserter:

Captain Rex: You're a deserter.

Cut Lawquane: Well, well... I like to think I'm merely exercising my freedom to choose: to choose not to kill for a living.

Captain Rex: That is not your choice to make. You swore an oath to the Republic. You have a duty.

Cut Lawquane: I have a duty. You're right. But to my family. Does that count, or do you still plan to turn me in?

Captain Rex: Do I have a choice?

Not the answer you're looking for? Browse other questions tagged star-wars jedi star-wars-legends or ask your own question.

66
Why did the Jedi serve a corrupt Republic?
26
Did any Jedi question the ethics of having a clone army?
2
Why did Mace Windu kill Jango Fett?
6
Why are canon Clone Troopers replaced?
6
Did the Galactic Republic use any droid forces during the Clone Wars?

42
Why are all Jedi given a rank of General in the Clone Wars?
5
What is the Jedi Council's military authority?
21
Was anyone else suspicious of the sudden convenient appearance of a Clone army?
52
How did the Republic have enough clones for... anything?
39
Did Tyranus know that the Clones would be at the battle of Geonosis?
11
How was the design and creation of the clones' Starcraft and equipment commisioned and kept hidden?
5
How could Slick betray the Jedi?
6
Did the galactic Republic keep up the manufacturing of Clones?
1
Why didn't the Jedi take out the chips of clones?
6
Were the clones originally supposed to be mind controlled?