Where did Doc get his money collection from?

In Back to the Future II, Doc pulls out a money suitcase (see image below) in 1955 for Marty to use a time-appropriate currency. Simple question: where did Doc get all that money from in the first place?

One could speculate that he obtained this money, legally of course ahem, from time traveling between the end of the main events in BTTF I and when he returns from the future at the very end of BTTF I, but he did say to Marty he was going 30 years into the future just before that journey. I'm looking for a canon or at least authority-supported answer. 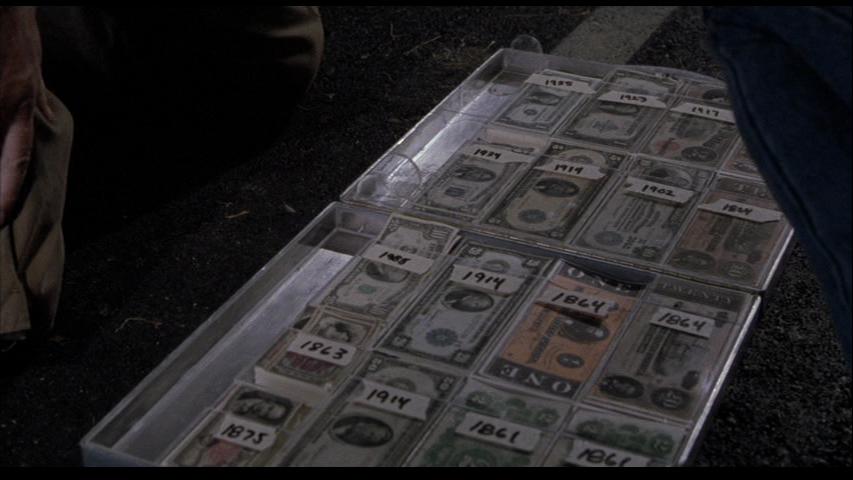 I don't know of anything that specifically addresses the money collection--Bob Gale and Neil Canton don't talk about it in the DVD commentary for that scene, and the usually-pretty-complete Futurepedia doesn't give details about where Doc got it in the money entry--but since Doc was implied to be pretty well-off in 1985, he could have either just bought old bills from collectors without needing to do any extra time-traveling, or perhaps he bought something valuable in all times like gold and then jumped to different times to exchange it for cash.

Although thinking about this, it seems like there is some circumstantial evidence that he didn't actually time travel to each period to get the money--in part II when Doc was talking about destroying the time machine as they were about to leave 2015, he said "My only regret is that I will never get a chance to visit my favorite historical era--the Old West", indicating he hadn't yet visited that period despite having bills from 1861, 1863, 1864 and 1875.

I suppose he could have visited the 1800s in a different geographical region than the Old West, but you'd think if he was in the era he would have made a visit, not to mention the DeLorean always took you to the same place on Earth in a different time, and in all their onscreen adventures we saw them remain in the California area.

As for why I say Doc was well-off in 1985, and what the in-universe explanation for that is, writer Bob Gale suggests in this MTV interview that Doc got a bunch of money (presumably to fund his experiments, not to mention buying a DeLorean) by burning down the family mansion he had been living in in 1955 and getting the insurance money.

The opening shot, when the camera is going through Doc's laboratory, there's a newspaper on the wall that says the Brown mansion was destroyed in a fire. You can infer from that that maybe Doc set his house on fire to collect the insurance money.

And if you look at the newspaper clipping in the opening shot, there's also another one next to it saying "Brown Estate Sold To Developers: Bankrupt Inventor Sells Off 135 Prime Acres", so whether or not the insurance thing is true, there's evidence in the film he made a large sum by selling the land. 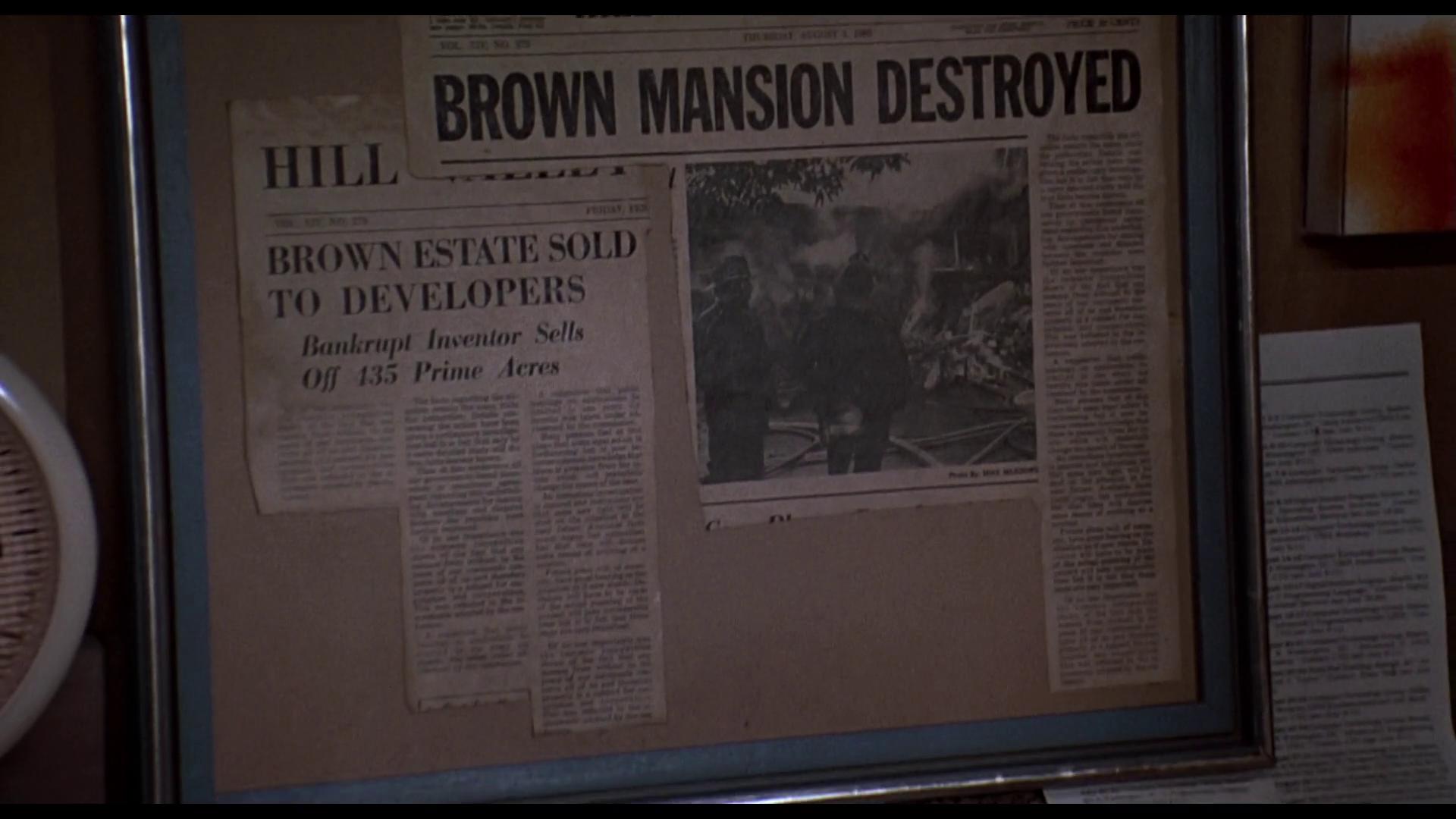 (people say online that this newspaper says the mansion burned in 1962, though it isn't visible in this screenshot)

As this is not a canon-supported answer, I originally started adding it as a comment, but I quickly realised it's too long for that format.

I always thought Doc acquired the currency legally. Even though Doc's done plenty of illegal stuff, I think robbing banks for money is a little beyond the pale. The criminal acts that Doc's performed have always been out of a more "noble" necessity. The train hijacking in BTTF3 was probably the most egregious, and that was done solely to return Marty to his own time.

Plus Doc's got this whole thing about not altering the continuum, can you imagine what a whole string of bank robberies through time might cause? Even discounting the financial ramifications of the robberies, if even a single serious injury or fatality were to result from a historical robbery, that would have dire consequences for the future. I simply don't think Doc would have risked getting the currency through dishonest means, especially using the threat of lethal force.

So how might he have acquired all that currency legally? Here's how I might've done it if I had been in Doc's place. Doc would've had to start off being quite well-off, as has already been mentioned. I imagine he would've taken a large amount of gold (which has pretty much always had value to humanity) into the earliest time period he wanted to get currency from and traded some (or all) of his gold for it. Then he could make relatively small jumps forward in time (say 20 or so years) so that he could easily exchange some of the older currency for the newer.

Alternatively, he could use his gold stockpile to purchase the newer currency, and this would be more viable if the price of gold in that era was higher. By keeping the time jumps small, he makes it easier to trade older currency for newer and also keeps the attention factor (from having large amounts of vintage currency) low.

The comic Back to the Future Vol. 1: Untold Tales and Alternate Timelines answers these kind of questions. As Bob Gale worked on it, it can be considered canon. When Doc travels to the future, he wins an old timer car competition, where the prize is pimping up the winner car at a reduced rate. (This is how the DeLorean got Mr. Fusion + the ability to fly.) To get the rest of the money, Doc travels to the past, buys a couple of Action Comics issue 1s, and then sells one off in the future. As it is in perfect condition, it is worth a LOT of money.

When I first saw this scene in the movie I wondered the same thing? At the time I simply assumed that Doc had prepared the case of money before his time machine even worked. Using in-movie clues we have:

1) The obvious well-to-do lifestyle of the Doc in 1985.
2) The news article of the mansion fire and selling of prime land.
3) The Doc's resistance to do crime or disrupt the timeline significantly.

All these would have allowed and motivated Doc to have the money collected in the modern (1985) time and using funds and means that were legitimate & passive, such as getting the money from present day collectors. (Realize that some of the money would be worthless or easy to get.)

Other clues in-movie:
4) The tape used to label all the slots is all ripped from the same roll and in sequence, tagged with the same pen, and consistently across all of the slots. This implies that the slots were tagged all at the same time.
5) The case perfectly fits the collective length of the accumulated bills meaning that Doc had all the bills prior to getting the case.
6) The sheer range of bills would either mean numerous time jumps or visiting a currency collector. Because that many time jumps would be MUCH more costly (even with Mr. Fusion) and risky, the relative ease to get the bills from a single (1985) source makes much more sense.

So - In my mind, this just fits Doc's character, the clues in the film, and is the simplest explanation to how one could easily get the money all in 1985 prior to any convoluted time jumping, robbing banks, or non-canon plot.

I may be wrong but I believe that case is visible briefly in the background of the parking lot (first test) scenes.

If he obtained all the bills in a single time period: the ones from earlier dates would be excessively aged and brittle. To buy enough mint or near mint bills to fill out his case as we see it, he would have to visit a LOT of collectors' shops, only buying one or two bills at a shop.

Its a process as tedious as: making multiple time jumps to do an elaborate series of trades in antique currencies and precious metals.

To quote Doc when he is briefing Marty in 2015: "I went further ahead in time to see what happens, and, traced it back to this point."

How far ahead is: "Further" ahead? He does not say. What he does say he has done: He spied on the McFly family for a while, had his blood overhauled, hover converted the DeLorian and installed the MR. Fusion. In Doc's personal lineage, he was gone for a quite a while. At any rate: If he got his hands on tech to make his car fly, and tech to turn banana peels and beer cans into nuclear energy, it's not hard to imagine he got something to accurately replicate currency from before when they had things like, watermarks and magnetic strips. Notice: the latest time period he has money for is 1985.

When I was a kid I remember seeing a scene that had Marty asking, "What'd you do rob a bank?" and Doc gave a pause and didn't say anything. That's when in the movie Marty gave him that funny look. I'm not sure if it later got edited out but I remember it from the older version on TV. Not sure if anyone else remembers that but I do.

The currency from the past could have been purchased at a currency collector shop. But obviously money from their future would have to require time travel.

When I was a kid I remember seeing a scene that is now gone that shows a $50 bill from the future and it looks eerily similar to the design change that was actually done!

I do not know what happened to the scene where they show money from their future and yet you can buy a prop of the futureistic currency online that matches my memory of the missing scene. Anyone else notice that? Or maybe it's still there but I keep missing it because it flashes on screen too fast?

13
Is Marty McFly Traveling to Parallel Universes?
4
Do any other dates in Back to the Future have any significance out of universe other than November 5?
9
Where did 2015 Biff hide the Delorean in 1955 when giving himself the Almanac in BTTF 2?
6
In the Back to the Future trilogy, does Doc ever piece together the letter about the terrorists?
39
Why did Doc Brown take so long to write to Marty?
5
What happened to Marty-A and Doc-A?
18
How did the Hill Valley clock tower break?
4
Why did Doc appear near Marty's house on the time machine at the end of BTTF 1?
14
Why does the recording about Twin Pines Mall not change the same way the newspapers and photographs change?
2
Does Back To The Future ever directly (visually) contradict itself?