Looking for two stories about a telekinetic boy

I have been trying to find a book I read quite a few years ago. Well, there are 2, one being the sequel.

Now I'm sure my memory has been kind enough to mix parts of the 2 books, but I will do my best with the description.

The cover of the book had a hand print. As far as the story, a boy finds out he has some powers from some guy. I think he had a ring that allowed him to use his power. Later when training the boy, he has him learn to control his power by deflecting rocks or meteors or some rocky item. The boy ends up using too much force and shatters them, but eventually gets the hang of it. Another part close to the end, the boy has a vision, I think, of some other kid getting struck by lightning, so he figures out a way to save the kid, but gets struck by the lightning himself.

In the second book, I remember a part early on where a sign falls from a building toward some child, but the boy uses his power to save the kid; afterwards, no trace of the boy is found. A lady who witnessed it said something like it was her dead son (I'm guessing his mom from the previous book).

I'm having trouble remembering anything but that. I read them in '97 or '98, I believe. As far as the publication dates, I never checked.

I found this post while trying to answer essentially the same question. I read these books as a child and really enjoyed them, but hadn't thought of them for years. So, I spent a couple of hours on various search engines trying to find the titles, or the author, with no results.

Finally, I resorted to the online catalogue of the library system where I had checked the books out years ago. Page after page of young-adult science fiction later, I stumbled onto

by G. Clifton Wisler. These do not seem to have been very well known. I'm looking forward to reading them again and seeing if they are as good as I remember them to be.

A high school freshman knows that he is different, from his strange dreams, his precognition, his scientific understandings; yet in the space of a week his once ordinary life changes when the truth about himself is revealed.

The book you are talking about is called Christopher. I have been looking for it for years and can't find it. Boy learns telekinesis from an old man. He starts by teaching to roll a shiny metal ball on a mirror type table. I wish I could find that book.

Every time Martin opens his mouth, he gets in trouble. He's just been dumped at the last place that will take him; a school filled with freaks, misfits, and psychotic bullies. His roommate starts fires, his new friends are thieves and cheats, and his teachers hate him. Then things start to get really weird.

This review mentions the psychic talents.

Everyone has given up on Martin. Even Martin. But at Edgeview Martin falls in with a group of five outsiders who make the other Edgeview rejects appear gifted by comparison. He makes a remarkable discovery: each of his friends possesses a remarkable talent. One is telekinetic. Another is empathic. Others have psychic abilities. Martin thinks these talents make them special. They think it makes them freaks.

No handprints on covers I've found, though.

"Thirteen-year-old Christopher enters a supposedly haunted house on a dare where he meets a mysterious man who teaches him to use mental powers he never knew existed."

I have been looking for a newer copy of this book to share with my eight year old. The book is called Christopher and was one I treasured at her age. It’s currently in a box somewhere in our basement; I'll share the publication information and a copy of the cover once I locate my old one.

A Goodreads review of Christopher by Richard M. Koff: 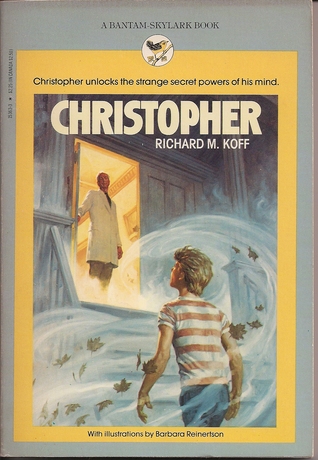 Christopher, on a dare, goes into this deserted house and finds a man living there who has been waiting for him, apparently. He is a teacher, and, through Merlin-like abilities, teachers Christopher about himself and about life in general.

I think the book with the handprint on the cover is called The Power.

In The Power the world is a recognisable place: there's a rich Nigerian kid who lounges around the family pool; a foster girl whose religious parents hide their true nature; a local American politician; a tough London girl from a tricky family. But something vital has changed, causing their lives to converge with devastating effect. Teenage girls now have immense physical power - they can cause agonising pain and even death. And, with this small twist of nature, the world changes utterly.