How do we reach Ultima?

When I was much younger, I was obsessed with a series of books that likely many of you are familiar with: Choose Your Own Adventure. In essence, each book was a self-contained role-playing game with numerous endings and fates for your character. (Some of you may also be familiar with the series of Star Wars books with the same format.)

Book no. 12 in the series was titled Inside UFO 54-40, and was written by series creator Edward Packard. It was first printed in 1982, but I came across it about a decade later. 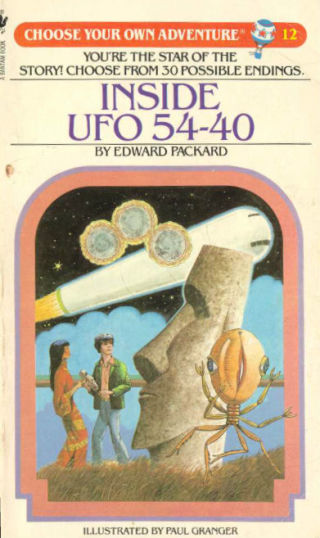 This book is unique in the series in that it contains a special ending of valency zero; that is, no choice made on any other page in the book leads to that ending.

The ending is also special because of what it represents in terms of the plot. Your character's story starts off over the Atlantic on the Concorde, when a long, tubular UFO appears and abducts you from the plane. 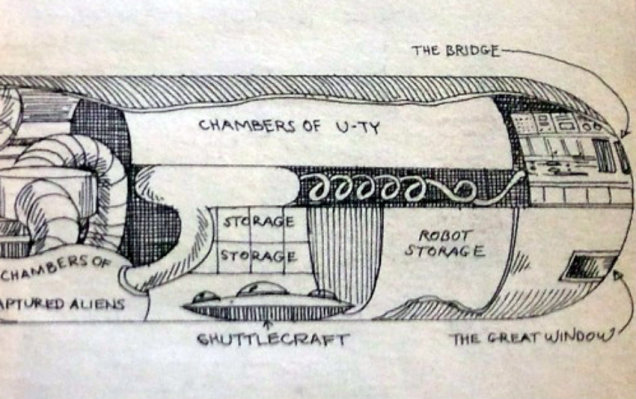 The ship you find yourself on is called The Rakma, controlled by aliens known as the "U-TY". They spend their days searching the universe for a mythical paradise planet called Ultima, all the while collecting zoological specimens from the various worlds along the way.

The book is arguably less cheerful than others in the series. Many of the book's endings are dead ends or worse — for instance, you can upset the U-TY and get sent to "SOMA" to sleep for a billion years. Or you might get split in two and watch in horror as your legs run away from your torso!

On the other hand, there are a few happy endings thrown in, such as escaping the ship and being reunited with your family again. But perhaps the happiest of them all is the special ending: it is the one where you reach Ultima and find eternal peace and bliss.

Seeing as we cannot get to this ending by making choices on other pages, my question is:

How do we reach Ultima?

(For the purpose of answering the question, one can read this as: How is one supposed to reach Ultima?)

By design, there is no way to get to Ultima by following the rules of Choose-Your-Own-Adventure books. The only way to get there is by reading the book like a normal book, one page after another, rather than a CYOA book.

Edward Packard has been asked about this at least twice, that I can find; Reddit user Shinkei sent him an email in 2014, and Packard replied with:

Thanks, [Shinkei]. I'll look into Reddit.com. As for UFO-54-40, some people think you had to "cheat" to get to Ultima, and I shouldn't reward cheating, but it's hinted strongly on the "Warning Page" at the beginning of the book that you can't get there by following the rules.

And in a 2011 interview conducted by author Grady Hendrix, Packard said:

In another book, Inside UFO 54-40, you learn about a wonderful planet called Ultima. The only way to get there was not to follow Bantam’s standard warning page, which was inserted at the beginning of every book, saying, "Do not read this book straight through." I altered the warning page for Inside UFO 54-40 to read, "Sometimes, for the most wonderful places, there can be no way to get there," which gave a hint at what was going to happen, and it turned out that there was no choice leading to the planet Ultima. It was just a page all by itself. You had to cheat, in effect, to get there.

The book itself tells you this, as well; the Planet Ultima ending includes the following text (bold is my emphasis, italics is from the book):

You did not make a choice, or follow any direction, but now, somehow, you are descending from space - approaching a great, glistening sphere. It is Ultima - the planet of paradise.

"No one can choose to visit Ultima," says Elinka. "Nor can you get there by following directions. It was a miracle you got here, but that is perfectly logical, because Ultima is a miracle itself." 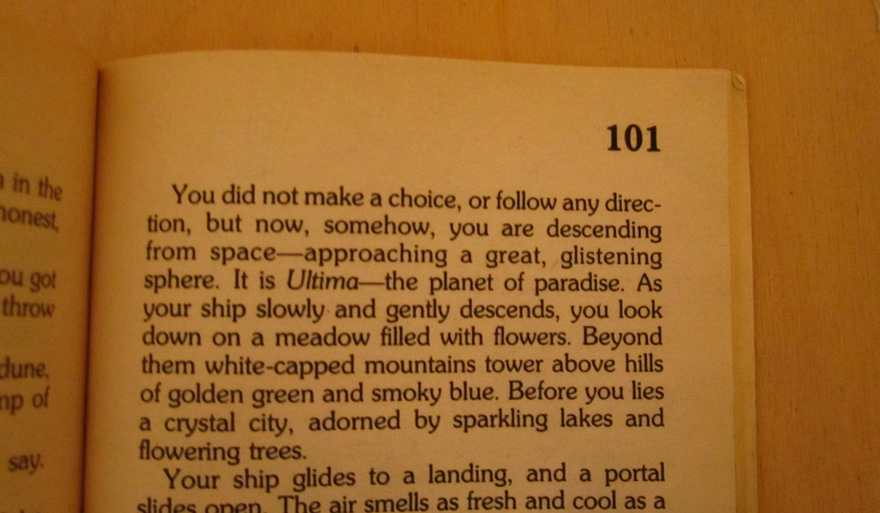 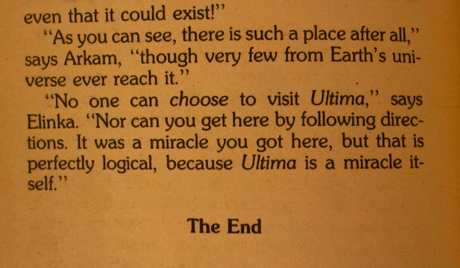 Not the answer you're looking for? Browse other questions tagged choose-your-own-adventure or ask your own question.