Trying to track down another book from my childhood. I read it somewhere in the late 80s to the early 90s in the United States. English language, probably from the library. The main protagonist is a school-age girl who lives with her mother and her younger brother (I don't remember if there was a father figure) on an upper floor of an apartment building in modern times. It was not a fantasy world, even urban fantasy other than what happens to her with the cat. She adopts a black cat (a stray she found?) and starts to feel that it's influencing her to do bad things and to become a witch. Most of what she does is petty things, such as seeing that her little brother set his trumpet on the windowsill of an open window and shoving it out. There was also a scene where the cat sat on a dress (black?) of her mother's with feathers on it and the protagonist washes it in the washing machine to get the hair off of it, ruining it because the dress was dry-clean only.

At some point, the girl does a ritual out of a book, which I know involved salt and burning something, creating smoke, although I don't remember if this was something the cat pushed her towards, or if she was doing it to rid herself of the cat. I remember her trying to explain to her mother that the cat was making her do things and her mother claimed she was just acting out. I do not remember exactly how the book ends, whether they ever establish if the cat really was making her do things, but I have a vague memory that it turned out with the cat going away and her life going back to normal.

I want to say that there were pen-and-ink illustrations in the book and I think I read it as a hardcover.

One scene that's associated with the book in my head, although it could be from something else, has the protagonist going into a laundry room in the basement where a man stalks her around the room, having shut off the lights, periodically lighting the room for an instant by igniting the lighter in his hand. She escapes, but I think scrapes up her knee in the process. It never comes up again in the book if it's the same book.

Jessica, a troubled young girl who lives with a neglectful mother, finds a stray kitten and hand raises. She comes to believe the black cat is a witch's cat, and she's being possessed and forced to do evil deeds by a coven of witches working through the cat. I do remember the scene with the trumpet (I think that was with a neighbor boy), ruining the mother's dress, the scene in the basement laundry room, and her attempting to perform a ritual she found in a library book to exorcise the cat.

It was illustrated with a few eerie black and white illustrations; this cover is also by the interior artist (there have been several different covers over the years). 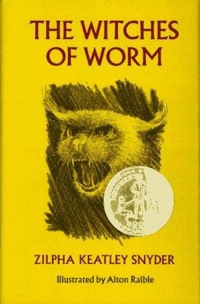 Not the answer you're looking for? Browse other questions tagged story-identification witches or ask your own question.