Why was Bruce Banner named David Banner in the old TV show?

In the old TV show Dr. Banner's first name was David rather than Bruce. Was there any reason for this name change, or is this just something the series did?

So Sean isn't wrong, the retconned version of Why was Bruce Banner named David Banner in the old late 70's early 80's television series? is Bruce Banner was too alliterative and considered a comic book thing but as I recalled creator Stan Lee mentioning something very different in the 1988 documentary Comic Book Confidential I looked around.

Here's a video in which Stan 'The Man' Lee give us the straight dope: What's in a name?.

As you can see Stan totally admits that the Network considered the name "Bruce" was too gay for them. But, as mentioned, Stan got the name 'Bruce' into the series on Banner's gravestone. 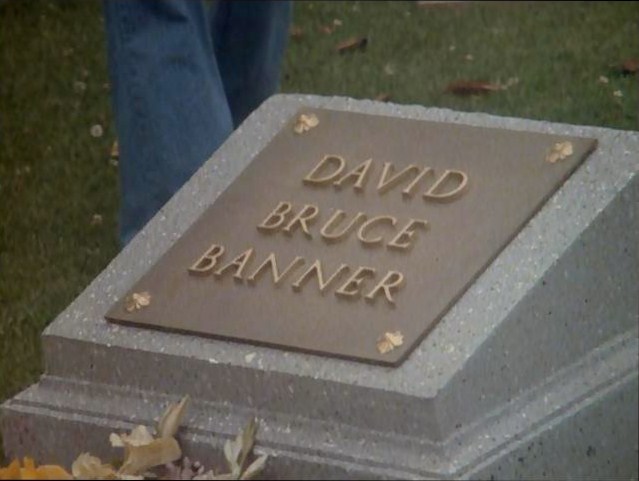 There are two primary theories. The most common one is the rumor that "Bruce" was considered too "camp" or "effeminate" of a name. This has been officially disavowed. The other, as recounted in the "Making of" documentary and in the link above, is that the alliterative name was considered too much of a comic book thing, so his name became David Bruce Banner.

It's probably worth noting that this was not the first time that Banner's name changed. Early in the Hulk comics, Stan Lee erred and had Banner referred to as Bob, which led to the name being established as Robert Bruce Banner, with him commonly using his middle name as his name.

It's not so much that Kenneth Johnson wanted the "get away from the comic book" in terms of not being faithful to the material. It's just that he wanted to avoid tropes that we've always associated with comic book, SF, and fantasy characters in general. In this case the ubiquitous alliterative name: Lois Lane, Peter Parker, Reed Richards, Susan Storm, Matt Murdock, Wade Wilson, Victor VonDoom (or Doctor Doom), Richard Rory, Cobra Commander, Bilbo Baggins, and the list goes on and on...

I guess alliterative names became a thing in the English language and even occasionally a few others (Shiro Sanada comes to mind) because they are catchy, distinctive, and memorable. Also, according to Stan Lee, it made it easy for him to remember all of those characters he co-created.

Johnson may have made an observation where he noticed that alliterative names were very common for characters in children's books.

You've got to admit, however, that it would be cool to have an alliterative name in real life. Just ask Richard Roundtree, the actor best known for playing Shaft! And then there's Ryan Reynolds aka Wade Wilson aka Deadpool. Need I say more?

I think the name David Banner just sounds better than Bruce Banner, just my opinion, I'm glad they changed it, the Director Kenneth Johnson said he wanted to get away from anything that had to do with the comic book , so maybe that had a lot to do with it.

2
When was Bruce Banner woken up?
9
What are the educational qualifications of Bruce Banner in the movie The Incredible Hulk?
0
Bruce Banner allows Avengers to use the powers of the Hulk despite being horrified by his actions
27
What did the Scarlet Witch show the Hulk/Bruce Banner?
4
Was Bruce Banner really working on the super soldier serum?