I remember watching a show on TV (pretty sure it was a movie) in black and white (although could have been shot in color, just viewed on a B&W set) in which a ventriloquist's dummy seemed to become sentient with murderous intent.

If I recall correctly, the story combined elements of suspense and intrigue/whodunnit amongst a group of characters (not just interplay of ventriloquist and dummy as in the 'Zone episode I mentioned), and I think the ending left some ambiguity as to "who done it" and whether the dummy was truly alive within the context of the story or just in the mind of one or more characters.

Can anyone help me identify the movie or TV show?

"Dead of Night" (1945). A group of people are gathered together, each tells a tale. Among them, a story of a ventriloquist and his dummy.

Could you be referring to the movie "Magic" based on William Goldman's book by the same name? Book published in 1976, the movie starred a young Anthony Hopkins.

It might be a book (or tv episode) in the Goosebumps series, specifically from the Night of the Living Dummy storyline. 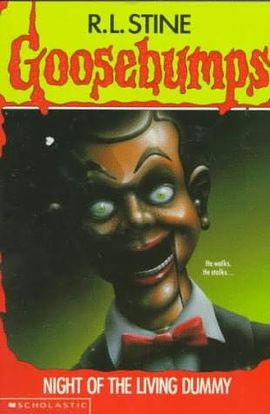 Plot from back cover:

Lindy names the ventriloquist's dummy she finds Slappy. Slappy is kind of ugly, but he's a lot of fun. Lindy's having a great time learning to make Slappy move and talk. But Kris is jealous of all the attention her sister is getting. It's no fair. Why does Lindy have all the luck? Kris decides to get a dummy of her own. She'll show Lindy. Then weird things begin to happen. Nasty things. Evil things. No way a dummy can be causing all the trouble. Or is there?

You can check out the Night of the Living Dummy episode from the Goosebumps TV show here.

21
1980s TV show where a man wakes from cryogenic suspension and discovers he is just a head?
11
Movie involving time-travelling Nazis
7
Anime movie involving people exploding into monsters?
4
SF movie involving robot-controlling antagonist
9
Archaic short-story with two men, one a railroad switch operator. Supernatural warning apparition
3
Genie show involving Magic and such
3
Seeking a kids' show involving a frog prince
11
Looking for a late 1950s to early 1960s movie or TV show with some similarities to “The Zanti Misfits”
24
Nuclear missiles about to land but time stops except for a lone housewife. What show is it?