Humans genetically altered to live underwater after crashing on a planet

Trying to find a book where humans were genetically altered to live in water after a crash landing on a planet. Generations later, they have forgotten they are human. I think the main character is named Levon and he keep swimming to the surface and dreaming of going to the stars.

James Blish, "Surface Tension", collected in The Seedling Stars (and many other places).

A human colonization ship crash-lands on a distant planet which is earth-like but whose only landmass is completely covered in shallow puddles of water and mostly microscope life forms. Normal humans could not survive on this planet, so the crew must genetically engineer their descendants into something that can survive. (Blish coined the term pantropy to refer to this concept.) They decide to create a race of microscopic aquatic humanoids to complete their mission and colonize the planet.

The majority of the story concerns one group of these genetically engineered colonists and their intelligence, curiosity, and evolving technology. In particular, the tiny aquatic humanoids develop a "space ship", or rather "air ship", which enables them to pierce the previously impenetrable surface tension of the water and travel through what is, to them, hostile space—open air—to other worlds in other puddles of water.

Here's an illustration for the story from the cover of The Best of James Blish. Nice fig-, erm, algae-leaf! 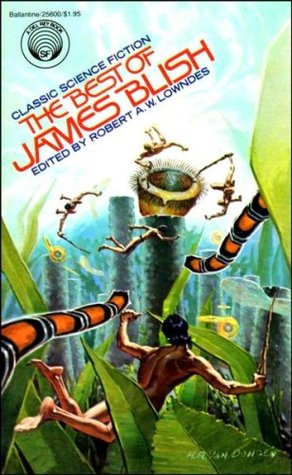 The guy's name was actually Lavon.

Not the answer you're looking for? Browse other questions tagged genetic-engineering story-identification or ask your own question.

25
Anthology: underwater aliens / an impassable wall / a moon with an incredibly low orbit
13
Trying to locate a Sci Fiction story about a humanoid micro-sized in a pool

32
Name the book where the setting is a giant ship with a planet inside
13
Short story about humans marooned on high gravity planet
5
What book is about a planet of feline humans?
7
Science Fiction Series about human scientists forced to live on high gravity planet by stronger aliens
6
Short stories about chimeras created by DNA changes after crashing on a planet with heavy metals, published in a magazine
10
Planetary colonization by human modification
11
Generational Spaceship Designed to Explode at Destination
9
Book about two humans who genetically engineer themselves to be able to exist in outer space
5
Scifi film involving humans thinking they live in a hollow planet