What happens to Thomas Riker?

A duplicate of Will Riker that was created in a transporter incident is discovered in the TNG Episode "Second Chances." The next time we see Riker's duplicate is in the DS9 episode "Defiant." We also learn that he is going by his middle name of "Thomas" instead of his first name of "Will" so as to differentiate himself from Will Riker. At the end of the episode Thomas gives himself up to Sisko, and agrees to do hard time for the rest of his life at a Cardassian labor camp.

SISKO [on viewscreen]: The deal is you'll be tried and convicted in a Cardassian court and then sentenced to spend the rest of your life in the Lazon Two labour camp.

RIKER: No death sentence, huh? That must have taken some doing.

After Riker turns the ship over, Major Kira tells him she is going to make sure he gets out.

RIKER: Transmit the Orias Three sensor logs to the Kraxon, and tell them to prepare to beam me aboard. I'm turning command over to Major Kira. She'll get you back to the Federation. I'm holding you personally responsible to see that these people get a fair trial.

KIRA: I give you my word. We'll get you out of there, Tom. I promise you that. (Riker kisses Kira.)

What happens to Lt. Thomas Riker after this episode? Does he ever make it to the labor camp? Does he ever get released or rescued? Do we ever hear from him again? If there isn't anything STU then anything EU, writer's notes, or anything else would be appreciated.

Canonically, the events of DS9: Defiant were the last we know of Tom's life. As you've already mentioned, we see him being shipped off to Lazon Two then he's never mentioned again.

There are a considerable number of EU books, comics, and even video games that follow the life of Thomas Riker beyond the end of that episode.

According to Memory Beta (the non-canon Star Trek Wiki) Tom had many adventures ranging from his captivity on Lazon II in a labor camp through to commanding the USS Opaka during the War of the Prophets. You can read all about it here: Thomas Riker 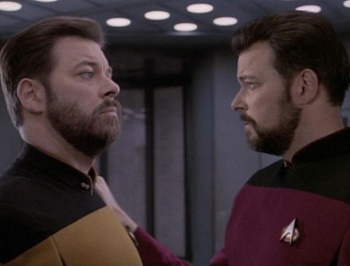 Here is a full list of media featuring the further appearances of Tom Riker:

Not the answer you're looking for? Browse other questions tagged star-trek star-trek-tng star-trek-ds9 star-trek-eu or ask your own question.

26
Was Subcommander T'Rul initially meant to be a permanent character on Star Trek: DS9?
56
In the Deep Space Nine Episode “Defiant”, what was the dispute between Riker & O'Brien?
6
What species is Vilix'pran and what do we know about him?
5
Was Sisko the first corporeal/linear being to meet the prophets?
7
Why would the Federation allow a trial and request for extradition of Worf without formal relations in place with the Klingons?
25
Did Sisko violate Starfleet regulations or Federation laws when he fired a torpedo to devastate a planet's atmosphere & force it's occupants to flee?
13
Is Sisko referring to the events of First Contact here and if so how does it affect things?
6
How did the Klingon war that Sisko refers to spread Starfleet thin?
4
How did they find Captain Sisko at the end of the DS9 episode “Waltz?”