What species is Vilix'pran and what do we know about him?

SISKO: I see you've put in a request to reassign Ensign Vilix'pran from cargo inspection.

BASHIR: I think that would be best. Given his condition, I don't want him coming in contact with any hazardous materials.

BASHIR: Vilix'pran is budding. His buds are undergoing individuation in just over a month.

SISKO: Reassignment granted. I'll have make sure I offer my congratulations to the ensign next time I see him.

BASHIR: O'Brien and I are throwing him a baby shower in a couple of days. I think it would mean a lot to him if you were there.

SISKO: Are you getting him anything?

BASHIR: O'Brien's building him a hatchling pond and I've put an order in with Garak for some new baby clothes.

SISKO: Count me in.

It's kind of a funny conversation because in our species this would normally a be a conversation between females not males. Sisko and Bashir both use male pronouns to refer to this person implying he is male. Bashir uses the term individuation implying it's asexual reproduction. Bashir also refers to a hatchling pond which would infer this person is possibly amphibious.

In a later DS9 episode "Apocalypse Rising" we learn that he's budding again and litters are generally between 2 and 12 offspring.

In DS9 episode "Business As Usual" Jake Sisko is babysitting the hatchlings and needs to make sure their wings don't get tangled.

STU or EU information is fine. If you find a picture of him please post it.

Vilix'pran species is never stated in the shows. He also appears to never get a species name in EU works either. All we know about him is that at least the young have wings, and he himself supposedly as a male, reproduces asexually. Other things we know is that he can have multiple kids as once, and is speculated at to have at least 6 children. Every single mainstream resource about star trek also states that his species is unknown. It appears he was made to be a form of gag. 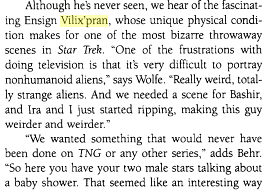 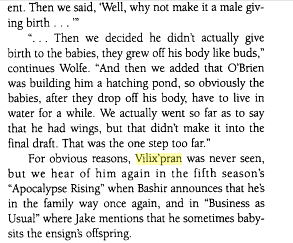 this is taken from the Deep Space Nine Companion.

3
Besides Prophets and Pah Wraiths, do distinct energy species ever meet in the same episode?
20
Does Q know about the prophets, from DS9?
11
When Odo was sent out as part of the 100 from the Great Link, what gave him amnesia?
7
What species or individuals can restore life?
8
Are Bajorans and Cardassians the same species?
6
Why did Starfleet expose themselves so easily to new species during Deep Space Nine?
5
What happened between Garak and Ziyal's grandfather?