Why didn't Data's head give off a detectable positronic signature in Time's Arrow?

positronic signatures are detectable at a considerable distance by Starfleet equipment, and Starfleet vessels seem to regularly scan for such signatures. In particular, it was decided that positrons are likely to show up even on passive scans of nearby space. (The motivation was that, in Nemesis, the Enterprise detects B-4's positronic signature from several sectors away.)

In the episodes "Time's Arrow" (Parts 1 and 2), Data's head is knocked off in a catacomb below San Francisco in the 19th Century, and the head spends several hundred years there until it is discovered during an archaeological dig in 2368. This sets in motion a series of events that includes the Enterprise coming back to Earth to investigate and several members of the Enterprise crew travelling to the 19th Century, which in turn completes the loop of Data's head being knocked off. (They also manage to bring Mark Twain to the 24th Century.) 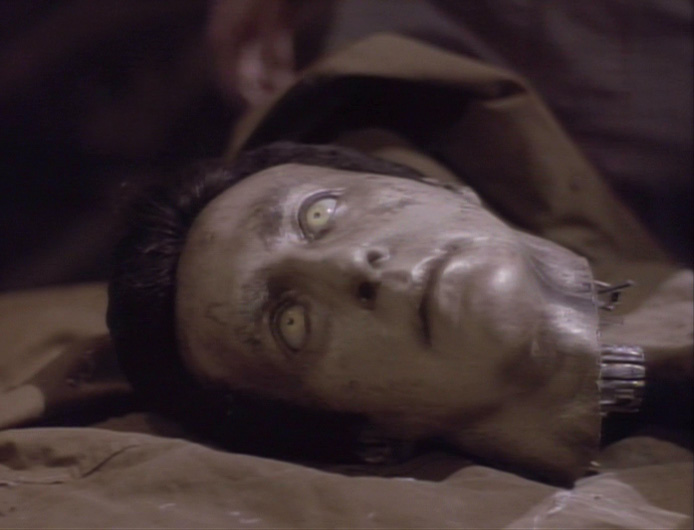 Comparing to Nemesis, B-4 was in pieces on the surface of Kolarus III and certainly not in any kind of functional state until he was reassembled on the Enterprise. Yet, he was giving off a steady positronic signature.

Was Data's head not emitting a steady signature? If not, then why? If he was emitting one, then why wouldn't the myriad of Starfleet equipment or vessels near Earth have detected the head well before a group of archaeologists working by hand?

I came up with some possibilities. Note that they're not mutally exclusive. It may be a mix of one, two or all three:

Picard (presumably having an awareness of the propensity of Soong-type android to emit a steady stream of positrons) somehow turned this feature off when he was mucking around inside Data's head. This would allow him to leave the head on Earth, to be found at a more appropriate time:

The cavern itself prevented the positronic emissions from being detected by Starfleet or off-world visitors. Note the similarity in the description between this episode and the cavern in TNG: Silicon Avatar which was supposedly laced with "refractory metals" (and which prevented the crew from scanning for Data):

SCIENTIST: The crew was having a problem with the regulators... something in the cavern was interfering with the phase conditioners... it turned out to be the cavern itself... do you have a tricorder, Commander?

DATA: The composition of the exposed rockface has been altered by exposure to triolic waves...

The head was emitting positrons as normal but eventually just ran out of battery. Note that the head has been placed in some sort of recovery mode and that his blinkies are not blinking, something that in previous episodes was supposed to indicate brain death.

When we join Geordi in the medical lab, he's trying to muck around with the power flow to Data's brain, one assumes to charge him:

I think we can safely say they were not regularly scanning for positronic signatures at the time of TNG, and did not start scanning until closer to the time of Nemesis. Support to back up this assumption is first, this own question, as to why starfleet did not detect positronic energy on earth, and second is in reference to TNG "Inheritance" in which Data works with someone who claims to be his mother, and who the entire crew assumes to be human, until her arm falls off and she is reveled to be an android like Data. In this episode i believe she was not only teleported on and off of the enterprise with no detection, the planet they were on was getting intensely scanned to find ways of saving it from destruction. Inheritance

11
Why wasn't Lore given to Maddox?
4
Positronic signature in Nemesis

21
Why didn't Data's freedom apply to Lal?
18
The ultimate fate and influence of the HMS Bounty
4
Positronic signature in Nemesis
11
How did Picard send a binary message to Data in the future?
41
In the Battle of Wolf 359, one ship survives. Which one was it and why did it survive?
12
Is Sisko referring to the events of First Contact here and if so how does it affect things?
17
Has Star Trek ever portrayed a culture/location on Earth besides North America and Europe?
10
Why did Picard leave the iron filing inside of Data's head?
13
Do starfleet ships still have prefix numbers?