How do the Avengers communicate?

In the Age of Ultron, the individual Avengers talk to each other over long distances. Like Captain America is in Sokovia and he just starts talking to Tony Stark who is in New York, expecting to get an answer. But they do not have any visible ear pieces or microphones. Also, there would likely be a security breach if they had visible blue tooth devices that could be stolen.

So how do the Avengers talk to each other over long distances? Do they have some microscopic microphones? How does the sound get in their ears when they receive a message from others? Think Captain America or Romanov who do not have fancy Iron Man suits that could have built in audio systems. Also, think how Ultron can tap into any phone signal, so the Avengers cannot use normal phone channels unless they have some added encryption.

In Iron Man 3, during the house party fight at the end of the film, you can't (easily) see an earpiece in Tony's ear. But it gets knocked out at some point during the fight, and this means that he can no longer communicate with Jarvis.

It's a teensy little blue glowy earbud that looks like it just sits inside your ear, and is apparently responsible for both transmitting and receiving (given that Jarvis can't hear Tony).

Since Stark is apparently the Avenger's outfitter/financier/housing office, it's pretty reasonable to assume that they all got a sweet earpiece each.

Here's a picture of it on the ground in Iron Man 3. It fell out of his left ear (I believe), or at least that's the ear he puts it back in. I decided against combing through the film(s) to look for a direct shot down both of his ears, and I'll gladly concede the accept to anyone that does.

SHIELD has developed inner-ear communication devices that don't require an external piece, as seen in the first episode of Agents of Shield:

Ward: Coulson said I'd need my comm receiver encoded. Don't know if you've worked with that model before. It's Fitz smashes it with a hammer Brand-new.

You can see below, Fitz smashing Ward's comm receiver to get the chip out. 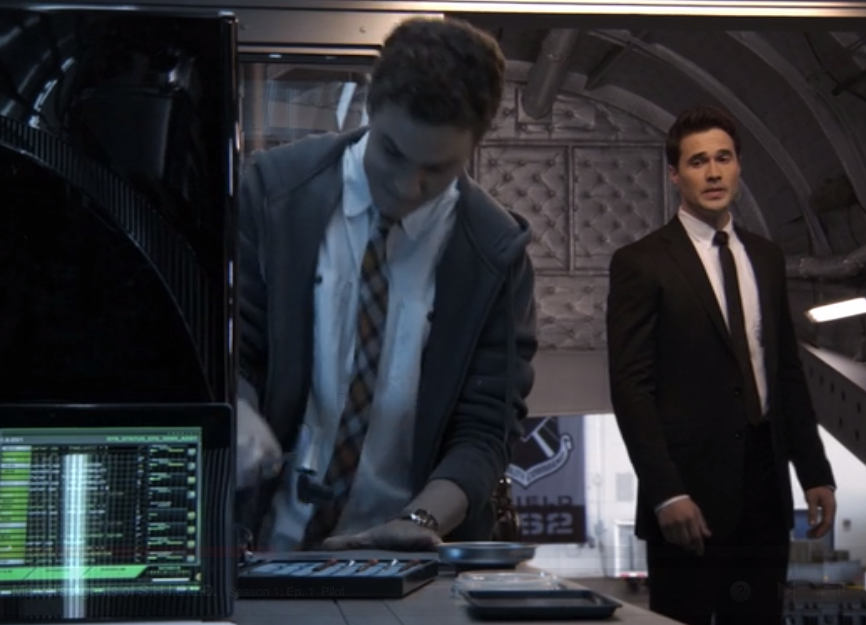 9
Who is funding Avengers facilities?
4
In The Avengers (2012), How did they communicate at the climax without any ear device even though the inner ear technology was created in 2013?
4
Has the Avengers' comm system ever been hacked?

28
Is Captain America super-human?
2
How is Thor's hammer imprinted?
2
How does Romanoff communicate with Barton in Age of Ultron
4
In The Avengers (2012), How did they communicate at the climax without any ear device even though the inner ear technology was created in 2013?
3
How does Ultron create his body in Avengers: Age of Ultron?
23
What happened to the magnetic return for Captain America's shield?
73
How was Spider-Man persuaded to join the side he did?