Has the Potterverse society stagnated in some aspects?

From my observations of the Potterverse, that society seems to be quite dated, looking at the attire and architecture in the magical world relative to the muggle world. An exception to this is the Ministry for Magic, however even that could be argued to be somewhat reminiscient of the 1940s or 50s with the fashions and and architecture also.

We can also extrapolate that, not just in England, but at least some other parts of the magical world still observe relatively dated technologies and fashions, as demonstrated by the Durmstrang ship and the (albeit flying) horse and cart from Beauxbatons. So, in some respects, the Potterverse society seems to be quite dated.

Yet, in other areas it seems that the magic society has is more advanced compared to what would ordinarily be expected of a society exhibiting such almost medieval fashions. For example, women's rights - the fact that there are female teaching staff, and quite senior ones at that, indicates some development beyond a medieval time. So some areas seem to have progressed.

So my question is this: has the Potterverse society actually stagnated in some aspects, for example architecture, technologies and fashion, as suggested by props and settings depicted in the novels and films? I am looking for authoritative sources to support or contradict this notion.

In terms of technology (at least, those found in the magic world that overlap with their muggle counterparts), I think it is safe to say that magic world has somewhat stagnated, but they have a good reason for that.

Compared to muggles, the wizard community is fairly unrestricted: they can travel vast distances in a short period of time without (apparently) using up any fuel, trivially perform menial labour that for muggles would require hours, communicate with anybody anywhere fairly easily (eg, floo network, patronus messages, Sirius's mirror, Hermione's coins, etc). The muggle world needed technological developments (such as electricity, for example), precisely due to these limitations, hence the higher amount of development in these regards. Wizards would have no interest in developing, say, electricity, because they already have an easier way of doing anything that electricity would allow them to do. Not investing their time in understanding electricity then implies not having developed any kind of gadgets that work on electricity. Their society thus does not revolve around the same technological development as the muggles and this also shows on their culture, architecture and clothing. Thus in these, I would say, yes, they did stagnate compared to the muggles, but they had their own good reasons for it. They didn't have the will, nor any reason to pursue the same technological goals as muggles.

That being said, it is not like the wizard society didn't develop in any way at all, while the muggles did. An example of this is the status of women in their society, as you already pointed out in the question; senior teaching staff at Hogwarts (Prof. McGonagall) as well as senior Ministry officials (Umbridge). Their super human abilities over the muggles allowed them to focus their development on aspects other than technology. For instance, although all wizards consider muggles to be lesser beings than themselves as a matter-of-fact, they still consider them humans and hence their equals (sure there are criminal organizations like the Death Eaters but they do not represent the mainstream wizarding world ideology). Some of the younger generation such Hermione are even open to improving the social status of such creatures as house elves, which wizards do not consider much more than a beast of burden.

Harry Potter takes archaic elements which really exist in modern British society, and exaggerates them a little for dramatic effect.

Hogwarts is based on British boarding schools, many of which are quite old and deliberately maintain archaic uniforms and customs. For example, here is a photograph of students at Eton (attended by Prince William and Prime Minister David Cameron, founded 1440): 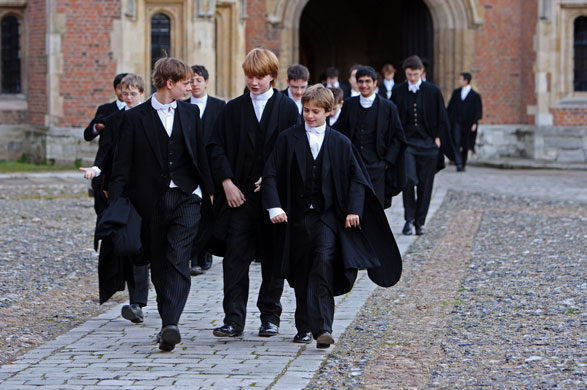 Note the age of the buildings as well as the uniforms.

Even horse-drawn carriages are used on some ceremonial occasions, for example the state opening of Parliament: 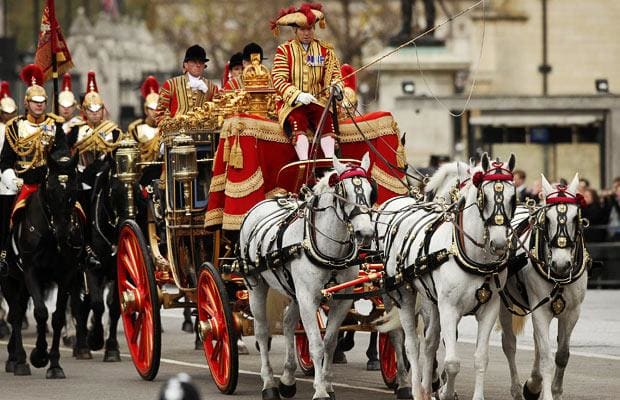 Most of HP is set in and around Hogwarts, which is an old educational institution similar to Eton, or to Oxford and Cambridge Universities. So it is not surprising that it has an archaic feel.

In these institutions, tradition coexists with modernity. The opening of Parliament is surrounded by archaic ceremony, but the House of Commons is a democratically elected legislature which conducts its day-to-day business much like any other. Regarding the questioner's point about female teachers at Hogwarts: Oxford and Cambridge Universities are fully open to women as students, professors and administrators. For example, Oxford University will be led by a woman starting next year.

In literary terms, JK Rowling revived a somewhat obscure genre: The boarding school story. Many of these date back to well before 1950. So the archaic feel of Harry Potter may also be a nod to its literary predecessors.

In a modern context, you can visit any drag strip and find hundreds of cars that look like Model T Fords. To assume that the Model T Ford is still the best car available would be a major mistake, as would assuming that the car has any similarity to a Model T Ford beyond its shape.

R&D is clearly still ongoing in spells, potions and magical artifacts though. But most of the attributes of our modern world (communication, transport, labour-saving devices, complex structures enabled by super-strong materials) are things the wizarding world has had for centuries, and a lot of them will still be going perfectly well.

Going back to your example, someone had to invent the Floo network, and someone somewhere has a wizarding factory making Floo powder by the ton. (Unless wizards make it themselves, but a time investment still puts a value on someone else doing it, for the same reason there's a value on having someone do your vacuuming, decorating or gardening.) Since there will be millions of fireplaces in the world, there also has to be some kind of ICANN-type administration.

(There's a separate question of why there's a Floo network, given that almost all adult wizards can Apparate, so the target audience for a Floo network would be pretty damn limited. But that's just one of the many bugs in JK Rowling's world creation - she was more concerned about it as a context for story-telling and not for economic soundness.)

Technological progress has already been addressed, but I'd suggest that societal progress has also stagnated. It was just never in as bad a situation as our society. There is evidence scattered throughout the books for at least the last thousand years. For example Hogwarts was founded by four people, two men and two women. There are no comments about this fact, no looking down on houses founded by women, or in fact any other commentary upon it.

There is other supporting evidence scattered throughout the novel. It's a very equal society from that regard. I can also hypothesize how this came about although there is less evidence for this theory.

Medieval society respected strength. Men ruled because they were stronger, and that fact reinforced itself over time. In the wizarding world though witches are just as strong as wizards. A medieval man may beat his wife. If a wizard tried the same though his wife has an even chance to be stronger than him. Without the power distinction gender would become a far less important measure and other things, such as strength of magic, would instead be the determining factors used for prejudice.

371
Why don't Muggle-born wizards use Muggle technology to fight Death Eaters?
13
Is the Resurrection Stone (or Any Magical Object) Ever Really Lost?
15
Is there a reason why Potterverse has no dwarfs?
112
Why aren't Muggles extinct?
42
How did Hermione become the Minister for Magic?
4
What are some indoor games played in the Potterverse?
4
Did Muggles and Wizards Ever Co-Exist?