What does Tolkien say about Ancalagon's physical appearance, especially his size?

Questions like this one dealing with Ancalagon in particular, and Middle-earth's dragons in general, clearly show that Ancalagon was ridiculously, absurdly, unimaginably enormous. 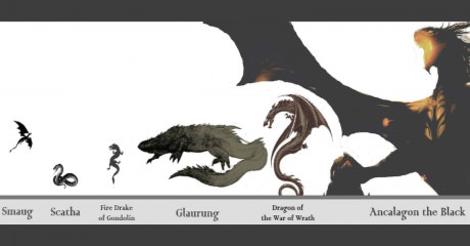 The non-canonical image above shows one person's impression of how the different dragons of Middle-earth stacked up, with Smaug looking absolutely tiny at the far left, and Ancalagon on the right, too big to even fit in the picture.

Below, a presumably canonical picture, painted by Tolkien himself, shows Smaug in relation to Bilbo. The rough measurements I took from this image suggest that Smaug is about 11 times longer than Bilbo is tall. Depending on how tall Bilbo is - almost certainly somewhere between 3'6" and 4' tall - Smaug is approximately 38-44 feet long. 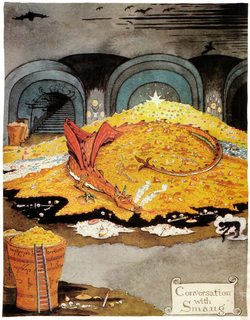 If the first picture is even vaguely accurate, Ancalagon would appear to be a minimum of something like 720 feet long from the tip of his nose to the end of his tail: the visible portions of his head and body are at least 6 times longer than Smaug is from end to end, and we have to assume that the portion of his body that is out of frame is at least 3 times longer still, perhaps even 4 times or more (so the upper range of his length might exceed 1,000 feet).

Does Tolkien give us any way to estimate how big Ancalagon was? It isn't his normal practice to describe things in great detail, I realize, but he often gives a few hints that allow for some rough approximation to be made. Does anything he says suggest that the first image is anything like what he had in mind?

Note: I haven't read anything about Ancalagon from Tolkien's own pen, except a few quotes on this site; the most important bit of information I've gleaned is that he smashed 3 volcanoes to pieces when he died (or something like that). How accurate is this, and what else did Tolkien say?

This question is not a duplicate of "How on (middle) earth did Eärendil kill a dragon as huge as Ancalagon?", because none of the answers to that question address Ancalagon's size in any detail - except my own, which is based on what little information I was able to glean from the two pictures I included in this question. All the other answers address how Ancalagon was killed, not how big he was. I have no interest in how he died, only how big he was, or rather, what hints we can find that might give some indication of how big he was. I wouldn't ask this question, linking that question in my own, if it contained the information I am interested in.

Note 2: Regarding the relative sizes and impressiveness of Smaug and Ancalagon:

Imagine a meeting between Smaug and Ancalagon in Dragon Heaven: Smaug: "How'd you die?" Ancalagon: "A flying boat full of fire made by the Angels and driven by a Magic Elf smashed into me, so I fell onto a mountain and broke it, and I died. The Magic Elf lives in outer space now, and the boat turned into a star. How'd you die?" Smaug: "Um... Some dude shot me with an arrow."

When I read the Hobbit the first time when I was thirteen years old, I assumed the proportions in Tolkien's picture were correct, and measured that Smaug was at least 40 times as long as he was wide across his nostrils.

Remember that even if Samug was as short as the 38 to 44 feet you suggest, he would still probably need a magical anti gravity power to fly anyway.

I have read a Tolkien letter where Tolkien wrote that in the picture he drew Bilbo several times larger than he was relative to Smaug, so that people would be able to see and notice Bilbo. Thus it is quite possible that Tolkien intended that Smaug be five or more times as long as you deduced by comparing Bilbo. So Ancalagon could be 3,600 feet or more long according to your first picture.

‘The hobbit in the picture of the gold-hoard, Chapter XII, is of course (apart from being fat in the wrong places) enormously too large. But (as my children, at any rate, understand) he is really in a separate picture or “plane” – being invisible to the dragon’ (The Letters of J.R.R. Tolkien, no. 27, c. March/April 1938, to Houghton Mifflin, the American publishers of The Hobbit).

Dwarf ladders would have rungs farther apart than Hobbit ladders and closer together than Human ladders. The ladder leaning against a huge jar of gold in the foreground can give a rough estimate of the size of the jar. The jars in the back beside the arch and the stairs should be the same size. Since Smaug is in between the two sets of jars he should be bigger than he looks compared to the closer jars and smaller than he looks compared to the farther jars.

The jars beside the arch, and the height of the steps inside the arch, should give clues to the dimensions of the space that Smaug should be able to get though when he enters and leaves his lair. Smaug's torso looks like it is about four times as wide as the width across his s nostrils, and thus about ten percent of his length. If Smaug can fold his wings really close to his body the space that Smaug should be able to squeeze through would be ten percent or less of Smaug's total length.

If the arch in the background is Smaug's entrance to his lair, estimates of its dimensions should provide an upper limit to Smaug's torso width and size.

How big was Lake town?

There was a South African play about a boxer called “King Kong” who used to boast: “King Kong bigger than Cape Town, King Kong knock any ape down”. If Smaug sometimes sang: “Smaug bigger than Lake Town, Smaug knock any city down” he would be only slightly exaggerating.

About a quarter of the people of Lake Town were killed in Smaug’s attack. Afterwards, a number of fighting men from Lake Town marched to Dale to try to gain some of Smaug’s treasure.

Of course Lake Town might have been rectangular with two sides longer than the other two, or might have been irregular with all four sides of different lengths. In Tolkien’s drawing of Lake Town the two visible sides seem to be approximately the same length and quite straight.

On one website there is an argument about Smaug’s attack plan and how would he be “foiled”, as Tolkien wrote, by throwing down the bridge from the shore to Lake Town. Some people deny that there would be any sense in Smaug landing on the shore and walking across the bridge to the platform of Lake Town. They ask how he would squeeze through the narrow spaces between the buildings on Lake Town, since apparently they never watched The Beast from 20,000 fathoms, Godzilla, The Giant Behemoth, or Gorgo.

Tolkien wrote how Smaug destroyed Lake Town: “Full on the town he fell. His last throes splintered it to sparks and gledes. The lake roared in.” He doesn’t write that Smaug writhed around with gigantic convulsions for minutes like a ham actor doing a prolonged death scene, so Smaug’s last throes probably did not destroy a much larger part of Lake Town than what was smashed beneath Smaug when he fell on it. .

Since Smaug was nearly as large as Lake Town, as shown when he fell on it and smashed it, and thus hundreds or thousands of feet long, Smaug would move around in Lake Town by simply stepping on and smashing all buildings in his way, or more likely he would avoid breaking through the platform of Lake Town by kicking those buildings to the side with his gigantic feet.

The market place of Lake Town was a circular harbor area perhaps hundreds of feet wide at the center of the Lake Town platform. It was probably Smaug’s plan to reach the harbor and put his front feet on one side and his back feet on the other side, lower his neck and his trail to the level of the platform, and turn in a circle as fast as he could around the market place, sweeping away and smashing hundreds of buildings and thousands of people in seconds.

But Smaug would have to adjust his magical anti gravity power to land on the shore and try walking across the bridge to Lake Town. Smaug would never trust his ability to fine tune his weight closely enough to land on the town and quickly adjust his weight to the correct amount. Smaug’s fear of breaking through the platform and falling into the lake would stop him from landing on Lake Town itself.

If that was Smaug’s original plan of attack, it would have been foiled by cutting the ropes and dropping the bridge from the shore to Lake Town into the water.

Of course, other people may suppose that Lake Town sent fewer than 100 warriors, or more than 1,000, to Dale and eventually the Battle of Five Armies, and some people may suppose that the army from Lake Town was more than 0.15, or less than 0.05, of the original population of Lake Town. And it is possible to estimate that the platform or deck of Lake Town had more, or less, than the 1,000 square feet, or 92.9 square meters, of area for each person that I guessed.

The brief accounts of the War of Wrath in various versions of the Silmarillion are the only clues to Ancalagon's appearance and size.

Except that Gandalf implied three different fire temperatures of dragons, which might be linked to their sizes, in The Fellowship of the Ring "The Shadow of the Past".

It has been said that dragon fire could melt and consume the Rings of Power, but there is not now any dragon left on earth in which the old fire is hot enough; nor was there ever any dragon, not even Ancalagon the Black, who could have harmed the One Ring, the ruling ring, for that was made by Sauron himself."

So that gives three temperatures of dragon fire, and perhaps body size ranges to go with temperature: the relatively cold ones then surviving, the hotter ones which could melt Rings of Power, and Ancalagon the Black.

And I have always assumed the dimensions of Ancalagon the Black should be given not in feet or meters, but in kilometers and miles.

Not the answer you're looking for? Browse other questions tagged dragons j-r-r-tolkien tolkiens-legendarium or ask your own question.

2
How big is Ancalagon exactly?
55
How on (middle) earth did Eärendil kill a dragon as huge as Ancalagon?

59
What did Smaug eat for 60 years?
35
How does Smaug know the name Oakenshield?
35
How much of the Middle Earth universe had Tolkien invented when he wrote The Hobbit?
106
Tolkien calls Sauron Morgoth's Greatest Servant - But does he ever really earn that with his actions?
23
How much did Tolkien write about the connection between WWI and his work?
17
What do Orcs and Trolls actually look like, or rather how did Tolkien imagine them?
46
Which of his races did Tolkien draw?
0
In The Hobbit, what was the original purpose of Sauron's army?
8
Is Gimli really 60+ years old in Lord of the Rings?