Why does Thor burn an imprint when he flies? [duplicate]

In Avengers: Age of Ultron, Thor leaves at the end by flying up into the sky and leaving an imprint burned into the ground. Stark comments that Thor has no regard for lawn maintenance.

I noticed other times when Thor flies without burning a mark in the ground.

Why does Thor burn a mark in the ground during some flights but not during other flights? If the answer is that he only burns when he is going off world, then what specifically is causing the burning? How does the mechanism work?

The complex burn marks left in the ground are not caused by Thor flying - they are scorch marks left over from the Bifrost, which is used to travel inbetween the nine realms and is located in Asgard. 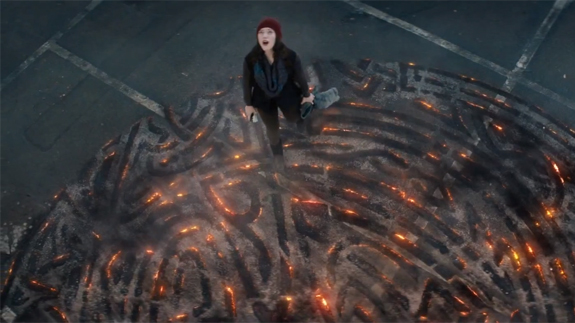 As for the burn marks themselves - we see in Thor that when left unchecked, the Bifrost can destroy entire realms, something which begins to happen when Loki leaves it open and pointing at Jotunheim, the home of the Frost Giants. As such, we can assume that it outputs huge amounts of energy in order to transport people from one realm to another, and as such scorches the ground when it does so.

18
Is there any significance to the patterns of Bifrost Landing sites?

27
How does Thor get back to Earth, again?
14
In Age of Ultron, Thor seems to know something he possibly shouldn't?
37
Why does Ultron hate Tony Stark?
10
Why does the Iron Man suit fail to notice someone approaching Tony while in sentry mode?
3
Does Thor dislike kids?
3
How does Thor return to Asgard in Age of Ultron?
6
Does Ultron believe in god?