I remember seeing a film (or part of) a long time ago (probably about 1988) and I'm trying to identify it. As I recall it was black and white. The only bit of it I remember had two men working with some equipment, trying to get it to work. The equipment was for playing discs (something like CDs, but I think they were metal). When they got it working it projected the image and sound of a third man. I can't recall if the image was purely a recording, or if it could interact with the other men and respond to them. There might have been an element of time travel in the film as well, or I could be mixing it up with something else. The film was in English (not dubbed / subtitled).

Thinking a little more about it I think that the person on the recordings was the boss of the other two and was issuing them their orders.

I seem to recall that there were lots of discs (in a heap on the floor?) and that the one they needed had a scratch on it. I think the machine might have been outside - they might have been on another planet perhaps?

I'm thinking This Island Earth (1955). they assemble a machine they know nothing about and use a metal disc to contact the alien Exeter who entices them to work for him. 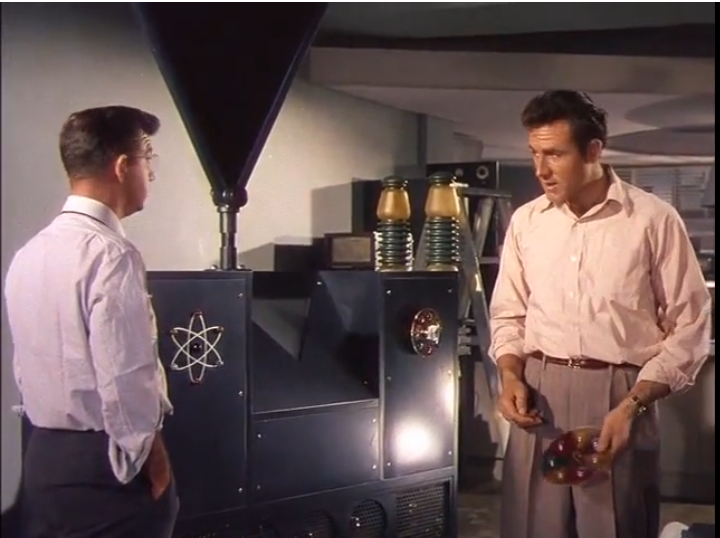 24
1980s movie/series on PBS about a man & his psychiatrist in a post-apocalyptic world
11
Which kids movie, from the 80s involved aliens with guns that could be powered by pennies?
8
Sci-fi movie identification - men fight in futuristic chairs and get zapped to death
5
Old scifi b movie about mechs
3
80s or 90s movie with evil genie and kids?
10
Live action sci-fi film on full body transplantation, unwilling victims end up in ape body, leading scientist betrayed