Does the Death Star spin?

When a Death Star is not travelling from one sector to another, and when it is not in attack mode (i.e. not firing or gearing up to fire its primary weapon), does it rotate about an axis as a planet or planetoid would? Is it part of its design to do so or not do so? In particular, will it begin to naturally spin on an axis when all of its thrusters are off?

For instance, when the second Death Star was in orbit of Endor in Return of the Jedi, was it spinning on an axis? 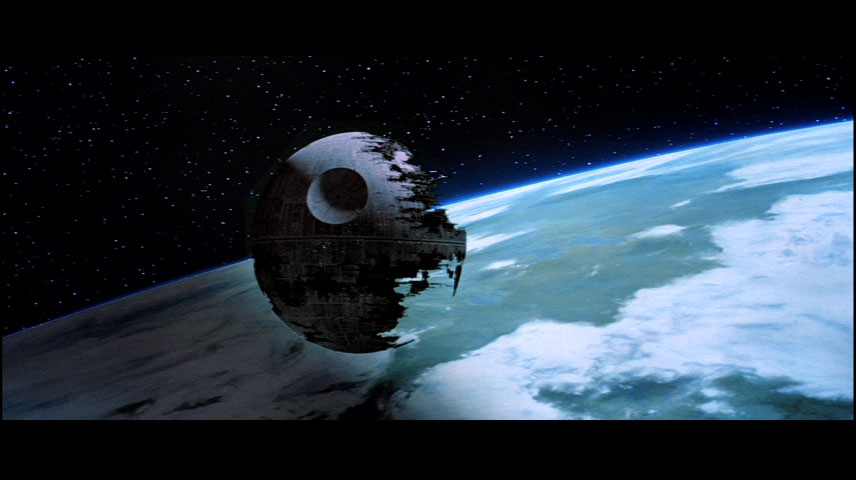 It can rotate - it would be almost useless as a weapon if it couldn't spin to face its target - but it doesn't have to rotate unless it is about to attack something. This gif, which has obviously been sped up a good deal, shows the Death Star rotating.

This site has a breakdown of all sorts of issues related to this question, including how much energy was required to perform its rotations; the most relevant portion of the text is as follows:

The Death Star battle stations could perform controlled rotation on at least one axis. This capability was vital to each station's role as a weapon. The composite "superlaser" beam could be fired off-axis within some limits, but the whole station must rotate to face targets sitting outside that arc. The first Death Star rotated towards its targets after arriving in the Alderaan and Yavin systems facing off-target. The second Death Star turned several times to face parts of the rebel fleet near Endor, and finally rotated almost 180° to face the moon.

Rotation about the polar axis was much less necessary for manoeuvring, since the station's sublight drives were equally spaced around the equator. Rotation about the other two axes may have helped the performance of manoeuvres involving accelerations above or below the equatorial plane.

When the first Death Star arrived in the Alderaan system the main weapon was pointed at more than 45° away from the planet. Within a few minutes, the station had rotated until it had a direct facing to the target. The rotation then apparently slowed or stopped when the planet Alderaan was in aim.

Wookieepedia's entry on Commander Jerjerrod includes the following excerpt, relevant to the question of whether it was rotating while in orbit around Endor (spoiler alert: it was).

The context: Jerjerrod had been ordered to destroy the moon of Endor if the shield generators were destroyed, but when the time came for him to carry out the orders, the Death Star was not in range to fire at Endor. It was also facing the wrong way, because it had been firing at the Rebel fleet. As the Death Star maneuvered to get in range to fire at Endor, Jerjerrod frantically tried to rotate it into position to target the forest moon, but he was too late.

With the moon still out of range, he ordered the Death Star's rotation to be accelerated before being handed the superlaser's trigger by the fleeing aide. At sixty seconds left until firing, the Rebels had already taken out the main reactor; even as the station crumbled around him, Jerjerrod sat calmly and gazed out of the viewscreen. When the countdown reached thirty seconds, the Death Star exploded, killing the Moff before he could execute the Emperor's last command.

I'm not a physicist, but as I understand it, objects in space only rotate in a regular pattern if their mass is evenly (i.e., symmetrically) distributed within them. If one side (or one point away from the center of the body) has more mass, the object will wobble around erratically like a drunk ostrich on a merry go round.

So what would happen if the Death Star shut down all its stabilization systems, internal artificial gravity generators, etc? Well, if its mass is evenly/symmetrically distributed, it would probably rotate on its axis in a stable manner. If its mass is not evenly/symmetrically distributed, it would wobble erratically, gradually drifting off towards the most massive object in the vicinity, but it would do so in a chaotic way, and it would be very unpleasant for everyone inside.

In any case, it would almost certainly begin to spin in one way or another, but I don't know if it would spin on one axis (like we see it doing in the gif, where it is spinning on the north-south axis), or spin chaotically on many different axes, or spin on an axis it was never intended to spin on (imagine being inside the Death Star while it was spinning on an axis halfway between the north-south and east-west axis - it would not be fun at all, and you would probably die from being repeatedly smashed into the floors and ceilings).

However, if the Death Star's mass is much greater at its core, or evenly distributed throughout the structure, and if it was maintaining a position near the solar system's plane (the level at which the planets orbit around the star/sun), it would probably take on a stable pattern of rotation, like a planet or moon.

And if we could determine where the gif in my answer came from, we could probably figure out whether the rotation we see is caused by the Death Star's propulsion systems or simply the result of the natural effects of the gravitational forces around it.

Sticking to the speculative nature of this section of my answer, it doesn't appear that the Death Star is going anywhere in particular in the gif. It seems to just be hanging around for the time being. That would explain why the Star Destroyer approaching the Death Star seems to be traveling in a straight line towards it. Of course, I could be wrong it is possible that the Destroyer is following a curved path towards the Death Star, but the path looks straight because the Death Star is moving in one direction. And in any case, we can almost certainly assume that the Death Star's stabilizers and propulsion systems are doing their jobs in the gif, so we probably aren't seeing purely natural rotation.

On a practical level, I don't know if it would be beneficial for the Death Star to rotate while it is more or less stationary. That could mean that any rotation we see when the Death Star is stationary is happening on its own, and the stabilization systems are merely keeping it upright.

The article linked in my answer suggests that we might be able to see natural rotation in the movie, in the scene where the Death Star is approaching Alderaan. However, they were going to Alderaan with the specific intention of blowing it to smithereens, so it is certainly possible - even probable, in fact - that the Death Star was merely maneuvering into place and being deliberately rotated to face the target so they could attack it.

Edit: It appears that I was probably wrong. I can't find anything about the rotation of the Death Star itself, so I decided to try to find information about the rotation of astronomical objects in general. According to what I have found, it seems that bodies in space rotate as a result of the momentum left over from their accretion (i.e., formation). The clouds of dust and debris that coalesced into planets, stars, moons, etc, was spinning as it clumped together, and the more compact it became, the faster it would spin (for the same reason ice skaters spin faster when they pull their arms inward, and slower when they extend their arms). The momentum was so great that after these objects coalesced into more or less spherical bodies (the way we see planets, stars, and moons today), they continued to spin, and haven't stopped yet.

So it would appear that, unless the Death Star magically formed from dust and debris like planets, stars, and moons did, it wouldn't begin spinning on its own. For more information, see this link, or simply google something like "why do planets rotate?".

Not the answer you're looking for? Browse other questions tagged star-wars death-star return-of-the-jedi or ask your own question.