What could have been done to save the forest moon of Endor?

We (mostly) all know that when the second Death Star was destroyed, it rained down burning debris forever changing the fate of that moon. Most accounts estimate that all life on the moon of Endor would be wiped out.

What could have been done to avert this catastrophe?

What you are referring to is "The Endor Holocaust".

In universe, it was "a theory put forward by Imperial propaganda agents after the Battle of Endor." In fact, Endor was saved :

Much of the debris of the superweapon was sent through a hyperspace wormhole that briefly opened up when the Death Star's hyperdrive regulator was destroyed.
[...]
According to the man's fellow cantina patrons, most of the Death Star's mass was obliterated in the explosion, while the Rebel Alliance used tractor beams to ensure the rest did not damage the world. [...]
At least one Imperial Star Destroyer did crash onto the moon's surface, though, and some debris was reported to have caused minor damage to Ewok habitats.

Out of universe, the link you submitted is "Original content is © copyright Dr Curtis Saxton 2002." (scroll to the bottom to see this mention) There's a mention of this work in the behind the scenes section of the Wookieepedia article.

The Endor Holocaust theory was first put forward by Curtis Saxton on his Star Wars Technical Commentaries fansite. Saxton claims that it is scientifically inevitable for the holocaust to happen, though it has never been identified as happening in any canon source. Some sources, such as X-wing: Wedge's Gamble and the comic book Apocalypse Endor, mention the theory, though reports in these sources are either propaganda or myth.

According to the official Star Wars twitter feed, the Rebellion deployed a substantial number of ships to tractor any planet-killing pieces out of harm's way. 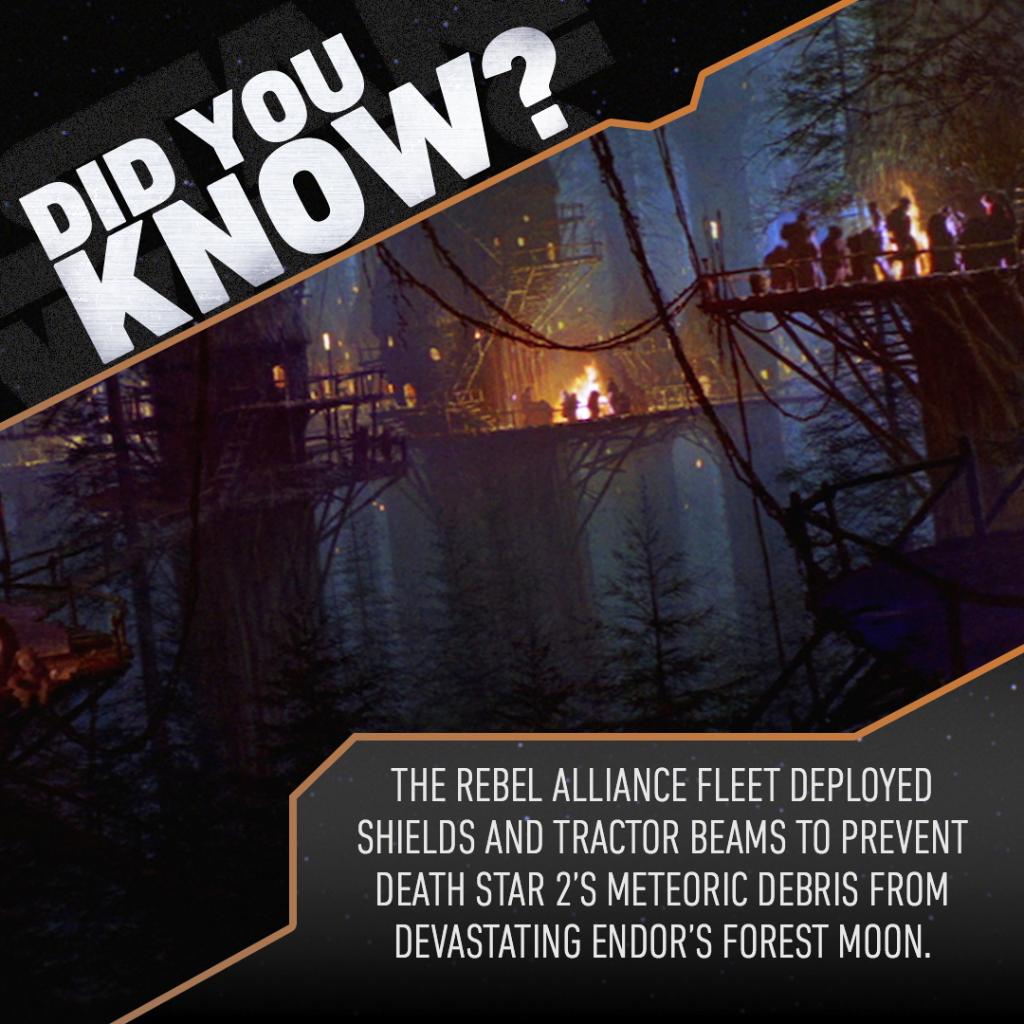 Assuming the second Death Star suffered the same level of destruction as the first Death Star, then the pieces of remaining material would have been very small indeed, with the bulk of the station cannibalising itself to fuel the energetic explosion.

Space filled temporarily with trillions of microscopic metal fragments, propelled past the retreating ships by the liberated energy of a small artificial sun. The collapsed residue of the battle station would continue to consume itself for several days, forming for that brief span of time the most impressive tombstone in this corner of the cosmos. - Star Wars: A New Hope: Novelisation

Note that when such a station is destroyed, the initial explosion appears to liberate a great deal of material but the bulk presumably stays in the vicinity and was consumed by the final throes of the ship's power generator.

Not the answer you're looking for? Browse other questions tagged star-wars return-of-the-jedi endor or ask your own question.

9
Did Starkiller Base use kyber crystals?

75
How did the Death Star move?
25
Why didn't the stormtroopers radio for reinforcements at the Battle of Endor?
8
No Endor wildfires?
17
How well known were the events of the original “Star Wars” trilogy in the general galaxy? Or was it all about clandestine special operations missions?
15
What is the small red planet/moon behind the fleet in the second shot of Return of the Jedi?
8
Why is time in the galaxy far far away described by reference to Yavin rather than Endor?
9
Does Rogue One create a plot hole in Return of the Jedi re Hyperspace Radio?
8
Was "Sanctuary Moon" a proper name specifically limited to the forest moon of Endor, or a category representing a general type of moon?
6
Why do the heroes in Star Wars keep letting their Force-sensitive foes detect them?
3
Tandy CoCo 2 game that replicated the Death Star trench run, maybe also landspeeders on the Endor moon?