Was there ever a visual representation of the crown Aragorn wore upon becoming king? I know they had one for the movies, but I'm wondering whether Tolkien ever drew one himself. Is there a detailed description of it I can find?

The following image was hand-drawn by Tolkien and attached to his letter #211 to super-fan Rhona Beare. 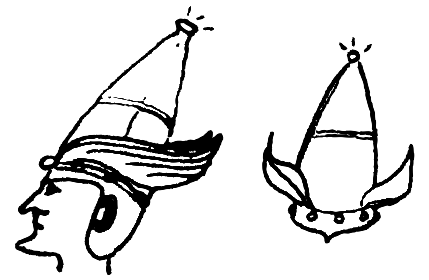 The letter also had the following description:

I think the crown of Gondor (the S. Kingdom) was very tall, like that of Egypt, but with wings attached, not set straight back but at an angle. - The Letters of J. R. R. Tolkien - Letter #211

which, in turn nicely matches the overall description from LOTR

It was shaped like the helms of the Guards of the Citadel, save that it was loftier, and it was all white, and the wings at either side were wrought of pearl and silver in the likeness of the wings of a sea-bird, for it was the emblem of kings who came over the Sea; and seven gems of adamant were set in the circlet, and upon its summit was set a single jewel the light of which went up like a flame. LOTR - The Return of the King

I can only hope to supplement Richard's excellent answer, not supplant it.

The first Crown of Gondor was a simple, unadorned war helm, of the sort worn in battle by the Men of Nùmenor. The first of these was destroyed when the King of Gondor, Anárion, was crushed by a rock launched from a catapult or similar device. Then, the helm of Isildur, which was presumably almost identical to the first, was used as the Crown of Gondor.

These helms were quite plain in appearance, with few decorations or embellishments (or perhaps none at all). Later, a new Crown was created for King Atanatar II; it was similar in shape to the previous crowns, but was elaborately decorated with jewels and precious metals.

When the royal line was broken, and the throne sat empty for many centuries, the Crown of Gondor rested upon the tomb of King Eärnil II inside the Houses of the Dead above Minas Tirith. When Aragorn made his claim to the throne, this third crown was used in his coronation as King Elessar Telcontar. After his death, the crown passed into the hands of his son, Eldarion.

The King wore the crown only during official ceremonies and when performing certain functions in his role as king. On less formal occasions, he would wear a simple band of mithril, called a filet, in which was set a beautiful jewel known as the Elendilmir, or Star of Elendil.

A Tolkien Gateway user named Grond produced this image of the crown, based on Tolkien's own illustration: 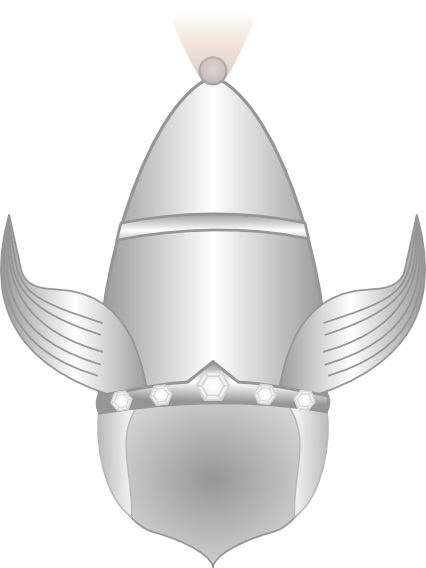 47
Do Balrogs Have Wings?
30
What kind of Wraith would Frodo have become?
11
How did Merry and Pippin get their Barrow blades back?
21
What did ships in Middle-earth look like?
12
Did Elrond want and expect Aragorn to become the King of Gondor and Arnor?
15
How many Stars of Elendil were there, and what happened to each of them?
16
Will there be another book/movie about The Hobbit / LOTR?
26
How did Bilbo and Aragorn meet?
5
Did Gandalf ever have a romantic partner or a spouse?