Why didn't Cobra-La take more direct action at the end of the Ice Age?

In the 1987 animated film G.I. Joe: The Movie, we learn that the world was once ruled by creatures who were masters of organic, bio-mechanical technologies, and who were driven by the Ice Age into a refuge ("Cobra-La") in the Himalayas. In their absence, Homo Sapiens evolved and filled the world with inorganic cities and devices.

In the 20th Century, Cobra-La's supreme ruler, Globulus, sent Cobra Commander out into the world to defeat humankind.

When it was clear that Cobra Commander was a failure, Globulus influenced the creation of Serpentor from a distance, hoping that Serpentor would provide Cobra with better leadership — and better results. Impatient with Serpentor's progress (but still blaming Cobra Commander), Globulus devised a plan to transform humankind into mindless beasts that would destroy each other, by showering the world with mutagenic spores. 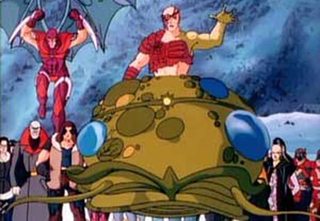 Cobra-La's biological technology is at least on par with humankind's modern, inorganic weapons, as seen in the film. As soon as the Ice Age subsided (1.8 million years ago), why didn't Cobra-La send out an army to conquer the world when humans were still relatively primitive, instead of waiting almost 2 million years and having to resort to Cobra Commander waging a guerilla war with the help of a band of human thugs and mercenaries, and then having to concoct the plan with the spores after he and his crew failed? (Incidentally and perhaps ironically, the spores plan required human technology — namely the Broadcast Energy Transmitter — in order to work.)

Why send out just one man (Cobra Commander) to face modern armies when you could have sent out your own army a million years ago to conquer a bunch of primitive tribes?

Because while Cobra were hiding in Himalayas, humans advanced and grew in numbers and strength and became more powerful than Cobra LA. That's why Golobulus came up with the idea of mass destruction of human race in only one sitting, so that he wouldn't have to deal with 6 billion people and their advanced weaponry, no matter they are inorganic or not (because they are very very effective).

Cobra La had no chance against humanity in a conventional war. They were inferior both in numbers and technology. Earth's geography had changed a lot while they were hiding, which meant they were aliens to the war ground. That's why they used guerilla tactics at first. CC failed. Then Golobulus tried to defeat human using their own weapon : he tried to combine the most important commanders and geniuses of humans, and create a human that would bring war against humans. That failed. Then Golobulus came up with another plan: destroying all humans at once with those spores.

Cobra LA was a great story arc, it was ahead of its time.

Not the answer you're looking for? Browse other questions tagged gi-joe gi-joe-the-movie or ask your own question.