Where did Marty hit his head?

I watched Back to the Future last night, for the first time in years, and I noticed something that I had never taken note of before. The nature of Marty's injury from being hit by a car is inconsistent.

As far as I was able to tell, he pushes his father out of the way, then turns to face the oncoming car. He puts his hands out to protect himself, the car stops short. Marty takes the full force of the impact in his hands and arms, and he is thrown back, falling backwards, and hitting the back of his head on the asphalt.

Later, he wakes up to find his incredibly hot mother applying a cold compress to his forehead. He realizes he is still in 1955, sits up, and his mother repeatedly mentions the bruise on his forehead, and tries to touch it. She focuses exclusively on his forehead, not the back of his head.

As far as I was able to determine, his forehead never suffered any injury - the car hit his hands (and possibly his knees), and the back of his head hit the pavement. Nothing seems to have hit his forehead at all.

Here is the scene I'm talking about - the car hits Marty at about 50 seconds in:

Is this an inconsistency, or am I missing something? Did Marty hurt his forehead, and if so, how?

In the original screenplay, the implication is that the car hit him and that he (somehow) bruised his forehead, either from the impact of the vehicle or him hitting the ground:

But George is still dazed. Marty dashes into the street, and in a spectacular flying leap, knocks him out of the path of the oncoming car.

As Marty moves to avoid the car, the car swerves in the SAME DIRECTION — there's a screech of brakes, and the car hits Marty!

George, never one to get involved, grabs his bike and pedals off, leaving Marty lying in the street, unconscious.

MARTY is lying in bed, lit by ambient light from a doorway. FEMALE HANDS place a cold compress on the bruise on his forehead. Marty groans and stirs.

if that makes you feel any better, there's actually a split-second cut between the car hitting him and us seeing him rocketing backwards where he could (theoretically) have hit the front of his head. 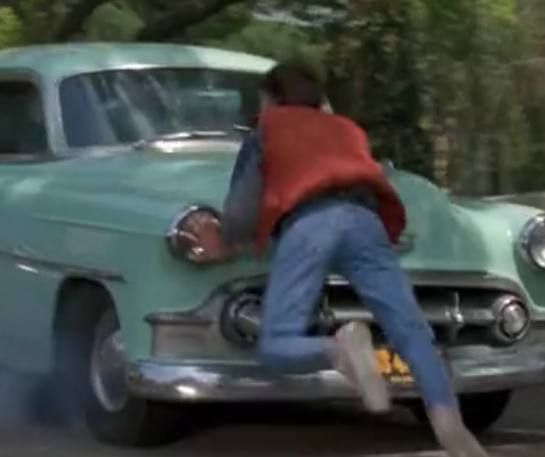 57
Back To The Future Flaw - why don't Marty's parents recognize him in the new future?
6
Why did Doc refuse to let Marty tell him about the night Marty went back to 1955?
3
Was Doc Brown about to break his own rules?
9
Where did 2015 Biff hide the Delorean in 1955 when giving himself the Almanac in BTTF 2?
41
Who invented Darth Vader? George Lucas or George McFly?
33
Can Marty McFly ever truly return home?
19
Why didn't doc and Marty just add a small metal plate or something to the old Delorean?
14
What memories did "Old Marty" have in 2015 of his time travel adventures?
42
Did the two Libyans die at the Twin Pines / Lone Pine Mall in Back to the Future?
5
What happened to Marty in the altered timeline created by his original trip to 1955?