What makes those three curses unforgivable?

NOTICE: The author of this question does not deem the use of those curses to be forgiveable under any but the most extreme circumstances.

What made the Unforgivable curses such? Is it due to legislation, consensus or otherwise? There are other curses which are equally evil, such as Obliviate - look what it does to Lockhart - which should also be considered Unforgivable. What about permanently transfiguring someone?

In short, What gives?

Well, the Avada Kedavra, Imperius, and Cruciatus Curses were made illegal by the Ministry of Magic in 1717 and classified as Unforgivables at that time via legislation, "with the strictest penalties attached to their use." (Tales of Beedle the Bard - Page 142 - Collector Edition). So, technically, it's due to legislation.

However, legislation is always based on the will of a group of people (I won't say 'all'), so at some point before 1717, concern regarding Avada Kedavra, Imperius, and Cruciatus reached a boiling point. Perhaps there was a particular incident or series of incidents that served as a catalyst for the legislation and categorisation of the Unforgivables, but it's clear that these three spells in particular were problematic.

Evil is subjective. Why the Unforgivables are classified as such while Obliviate or Sectumsempra or an entrail-exploding curse are not included in that category is unclear from canon. Personally, I think that wiping memories or transfiguring someone against their will into an animal is morally reprehensible in general. There are always exceptions to the rule, where the use of a particular spell or curse might be deemed justified. It depends what POV you're looking at a situation from. Did Potter fans get all up in arms when Harry used the Imperius Curse in Deathly Hallows? No. Because they believed in him and his mission. But no-one likely felt sympathy for Barty Crouch for keeping Barty Crouch Jr. under the Imperius Curse for the however many years that he did, because his motivations were not ultimately selfless. That's what makes evil so insidious, I think. Like humour, it's so often subjective. 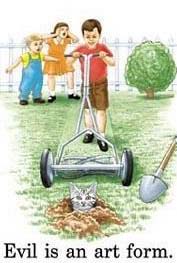 (NOTE: No cat was actually mowed over during the production of this post)

Well, they're called the unforgivable curses because that's what they are legally, right? I'm not going to get my book out, but I think fake!Moody says as much when he is teaching the class about them.

I don't think it is legal in the Harry Potter universe to use 'obliviate' the way that Lockhart does - he has a sinister plot going, and he gets his comeuppance. But 'obliviate' is a legal spell under the appropriate circumstances - for example, when being used by the ministry to preserve the secrecy of the wizarding world. Similarly, it's not OK to forcefully transform someone, but those transformation spells do have legal and helpful uses. There is NO situation, however, in which it is legal to torture someone, control someone else's actions, or to murder someone out of hatred. Therefore, those 3 spells, which have no other conceivable purpose and are in fact impossible to cast without cruel intention, are the unforgivables.

If the oblivate spell were illegal, muggles would know everything about the wizarding world.

Actually there's more nuance to this issue. I wouldn't say that all the Unforgivables are inherently evil. Especially Imperio could be used to deescalate tense situations peacefully and without casualties. I would also say that they don't have to be fueled by hatred (not sure about Crucio).

Let's look at Imperio first: Harry indeed uses it on a goblin at Gringotts. He had never met said goblin and from the way the passage was written I doubt he actively hated the goblin.

Secondly Avada Kedavra: Severus Snape cast it at Dumbledore. He didn't hate Dumbledore and he did not wish to hurt him or do him unwanted harm. The whole idea was that Snape would kill Dumbledore to end his suffering. That is as far from evil intent as you get and yet he could successfully cast it.

If I remember correctly, it was said you need to mean the curses, not that you need to hate the opponent (although when trying to cast Crucio you likely need to hate the target since there is not much use for that particular curse except to hurt, this is also I believe stated in the books), which may mean that power, skill and willpower would be enough to cast two out of three of the Unforgivables.

As an aside the use of the spells itself is not penalised, only the use on humans (which might mean that Harry did nothing illegal when using Imperio on the goblin since goblins are classified as a being and is therefore not human). This may or may not be true, since the whole human thing was only stated in a lesson and not taken from any legal text.

As a little aside: the use of the Unforgivables was legal for Aurors during the First Wizarding War.

I would agree that they are the Unforgivable Curses because they are unblockable and punished regardless of situation.

From a moral standpoint I could see a use for Imperio and Avada Kedavra with good intent, and find curses like the Entrail-Expelling curse far more unforgivable, because what are you going to use that one for but to cause harm and potentially death to the target?

These 3 spells are the only ones that can't be blocked by any known magical shielding spell. For a society that still has dueling as a tradition, an unblockable spell is the height of shame and outrage. It's the equivalent of bringing a gun to a sword fight; the level of dishonour is literally unforgivable.

The wiki says that the legislation was passed in 1717 when dueling would have still been an accepted way of solving disputes. So the law ensured that no one could use any of the 3 cheater spells in any duel.