Do we ever hear the Romulan language being spoken?

In Star Trek we occasionally hear alien languages being spoken, notably Klingon every now and again, and Vulcan features infrequently. The third major alien species that features regularly is the Romulans; I don't recall hearing it, but do we ever hear their language being spoken?

There was an episode of Enterprise where they first encounter Romulans and before the ship's computer can render a translation, you only hear Romulan. This is what is heard (from Memory Alpha):

The Memory Alpha page provides a small list of phrases and words that we hear or see in the franchise:

In terms of seeing the script, we see the following script on Geordi's VISOR in TNG: The Mind's Eye: 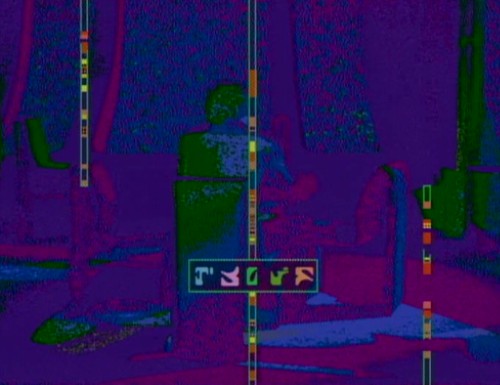 There is also quite a far more extensive understanding of the language provided on Memory Beta, but these are outside the scope of the question (which refers to language heard on-screen)

29
Why did the Klingon language flourish?
8
How can there be different languages with universal translators?
7
What languages is Data fluent in?
26
How would Starfleet know what a Romulan looks like in Star Trek 2009?
15
Was the use of Klingon ships by Romulans ever given an off screen explanation?
32
Does same-species racism exist in Star Trek?
2
Star Trek Founders' alien name?