When did Superman stop leaping and start flying?

As I understand it, the famous tag line regarding Superman - "Able to leap over tall buildings in a single bound" - was meant to be taken literally. That is to say, Superman didn't "fly", he simply "jumped" extremely high.

When did this change, allowing him to actually fly?

He started flying in the 1940s right after the creation of the Fleischer films. This was because it became difficult so show him leaping from place to place. The Fleischer films used a form of rotoscoping and many of Superman's actions had to be drawn by animators because they couldn't be rotoscoped at the time. It was easier to show him flying than leaping.

The Fleischer cartoons were also responsible for giving Superman perhaps his most singular superpower: flight. When the Fleischers started work on the series, in the comic books, Superman could only leap from place to place (hence the classic phrase, "able to leap tall buildings in a single bound"). After seeing the leaping fully animated, however, the Fleischers deemed it "silly looking", and asked Action Comics' (which would later become DC Comics) permission to have him fly instead; the publisher agreed, and wrote the flight ability into the comics from then on. REF: Wikipedia > 1940 Superman Films 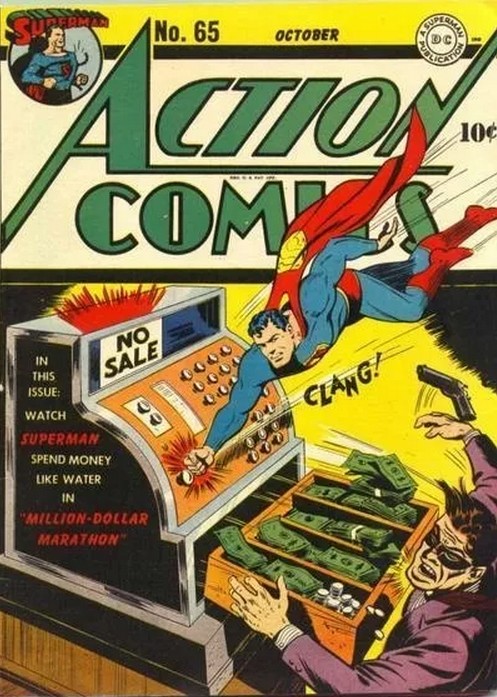 Superman's pedigree of powers has grown and varied over the decades. Since he is one of the oldest, if not the oldest of the four-color heroes, it is difficult to tell exactly when a particular power is considered to have come into fashion.

His powers when he first appeared in Action Comics #1 in 1939 were:

While this was sufficient for the comic strip for a while, it became a problem for the Superman when he became a radio play character and even more so when he became animated during the early 1940s.

In the early radio programs and even from the very first Fleischer film Superman (aka The Mad Scientist) Superman was supposedly "leaping" from place to place. But artistically having to show our hero jumping around was stylistically difficult given the film lengths and effort required to make them.

During this time, superheroes were beginning to gain traction and Superman was experiencing competition. So he became a bit flashier to keep up. During the fifties, the Superman Family expanded adding Krypto, Supergirl and Mon-el.

At this point Superman's powers began to expand:

He would often, however, have to deflect materials, bullets, shells, deadly beams of energy and would use his hands to do so. This lead to a pose where he would have at least one of his hands out in front of him to catch or deflect incoming attacks. He would also do this if he were carrying someone to protect them as well.

This ultimately lead to the later flying scenes where he would be shown flying and artists treated his flying as if it were a form of anti-gravity swimming where he would alter his direction by twisting his body and changing his leading pointing hand.

Superman's transition to flight was a slow procession from his comic strip.

Superman's powers have developed over the ages - originally he could not fly as pointed out.

The Original Superman from the 1930s had the following powers:

From about the 1940s, he attained the ability to fly. This is explained due to the comparatively weaker gravity of Earth and the intensity of Earth's yellow sun. The article linked below seems to indicate that flight was given to him in the Silver age.

In the alternative universe of Smallville, the article linked below shows that Superman developed flight progressively in his teens:

Flight is developed very gradually over time. The first mention is in the first season episode Metamorphosis, where Clark first "defies gravity"; however, this is not really controlled. He is shown to be hovering over his bed while sleeping, but falls and destroys his bed once he wakes up. The first real controlled flight is in the second season episode Vortex, although this is with the help of a tornado. In the third season finale Covenant, his "floating" in the air is assisted by Kara, a dead human who has been empowered and brainwashed by Jor-El. In the fourth season episode Crusade, he flies properly, but only in his Kal-El persona. The limitation on this power is due to the "No Tights, No Flights" rule made by Alfred Gough and Miles Millar to make Smallville more believable. As long as the character had no Superboy costume, he would not be allowed to fly.

This idea of gradually developing the ability to fly is supported by this excerpt from the Superman Wiki:

Some Kryptonians, before they develop the ability to fly, can jump and leap incredible heights and distances due to their incredible muscular structure in addition to their low weight

It is thought that the development from leaping to flying is due to the Photonucleic Effect i.e. over time Superman's abilities improved.

On the Comic front, according to this question from Yahoo, it is in May 1943 that Superman was first able to fly, with his abilities to fly gradually improving:

Not until May 1943 is Superman explicitly referred to as a "being who can fly like a bird" and not until later that same year can it be said, without qualification, that Superman actually possesses the power of flight

Unfortunately the source referenced in this question is a broken link, but according to my research it would have been in Superman #22 assuming it is indeed May 1943. I don't have access to this comic unfortunately, but if someone does their input would be greatly appreciated!

Technically speaking, Superman did fly in the comics prior to the Fleischer films. He first flew in Superman #10 in 1941. That said, it was an art mistake by Leo Nowak, new to the book. Because prior artwork made Superman's leaping look a bit like flying, Nowak assumed that was part of Superman's powerset. 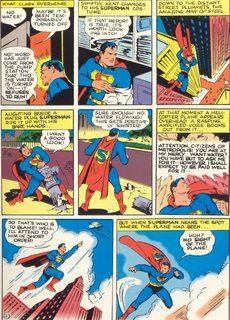 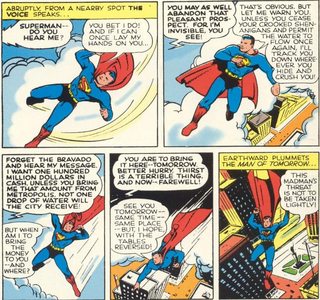 He didn't get the power of flying officially, of course, until 1943 in Action Comics #65. 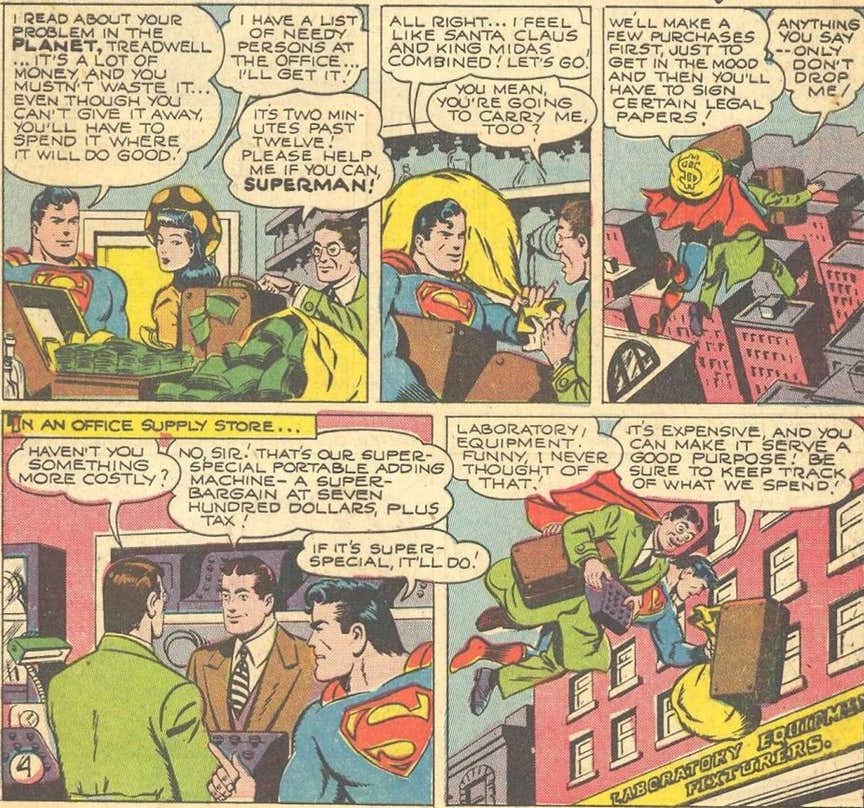 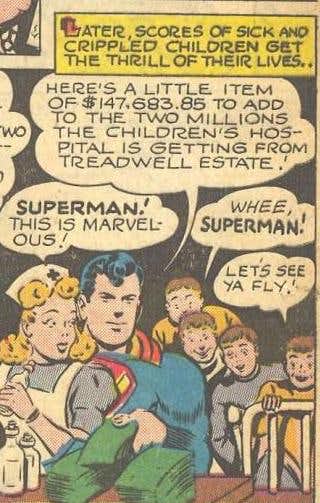 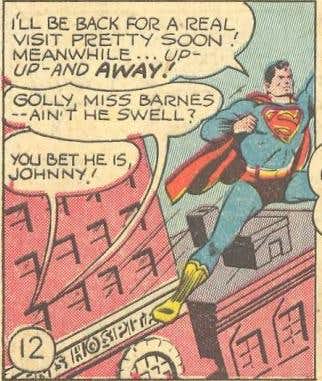 Flight really came along in the radio series. His "leaping an eighth of a mile" ability wasn't particularly aurally memorable, but with flight, they could add in a nice sound effect, and the now classic "Up, up, and AWAY!" catch phrase.

An astounding amount of what we now consider standard canon for Superman came from the radio series. The Daily Planet, Jimmy Olsen, and even Kryptonite were created by the radio show writers.

73
Why does Superman wear his underwear outside his pants?
8
What is the earliest example of Superman-style flight?
10
Who was the first comic book superhero to fly without technological means?

6
Why did Superman & Supergirl start to suffocate instantly when Luthor made our yellow Sun red?
12
Where did Superman get his boots?
12
What happens with Krypto when Superman becomes an adult?
12
Can Superman reverse time in comics by flying faster than speed of light?
2
When did Superman say this line?
5
When did Lex Luthor save the world from Superman?
8
When did Superman first use his super breath and freeze breath?
5
Is there an in-universe reason why Superman is not flying all the time?