Have Spider-Man and Captain America ever fought?

Do we know who would win in a fight between Captain America and Spider-Man? Have they ever fought in the comics?

This fight has happened before. Unfortunately, it was cut off before the fight finished so we didn't get a true answer, but as the fight was unfolding, Captain America generally had the upper hand, and Peter knows it.

This happened in Amazing Spider-Man #534, part of the Civil War storyline.

It must be noted that neither of these combatants are fighting to kill. Neither really wants to be there, and they're both likely pulling their punches at least a little bit.

During the battle, Peter believes that his Spider-Sense can give him the upper hand, allowing him to dodge the shield. It does, but it's not enough. Cap is a tricky fighter. He falls right into Cap's trap. 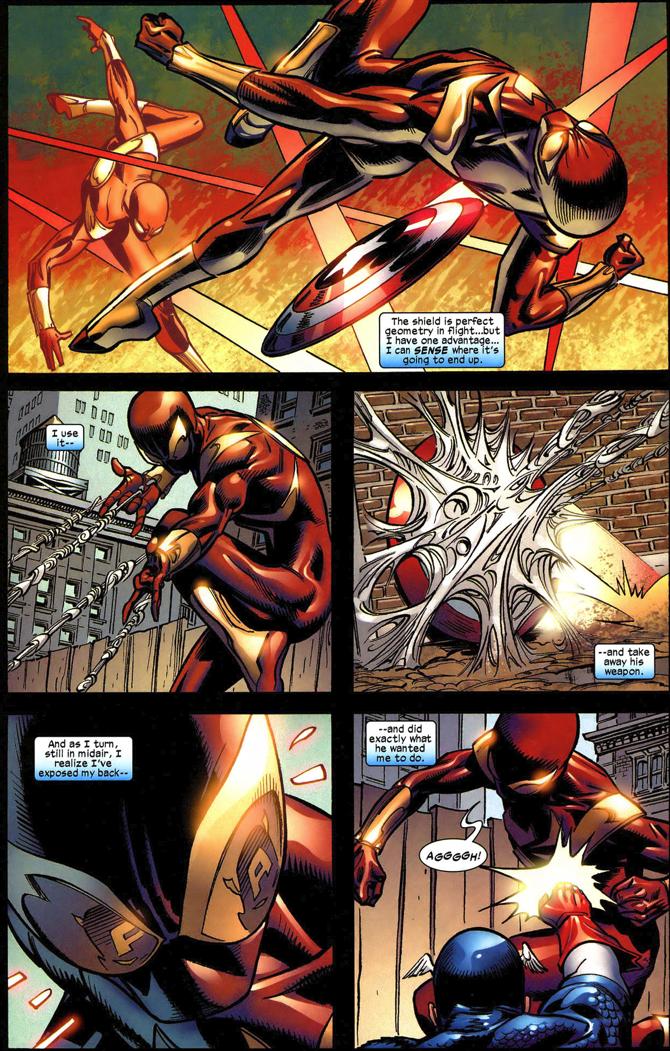 Cap has been around a long time. He studies his opponents and their skills. He knows how to fight them. This is the case here, and he's doing well against Peter. 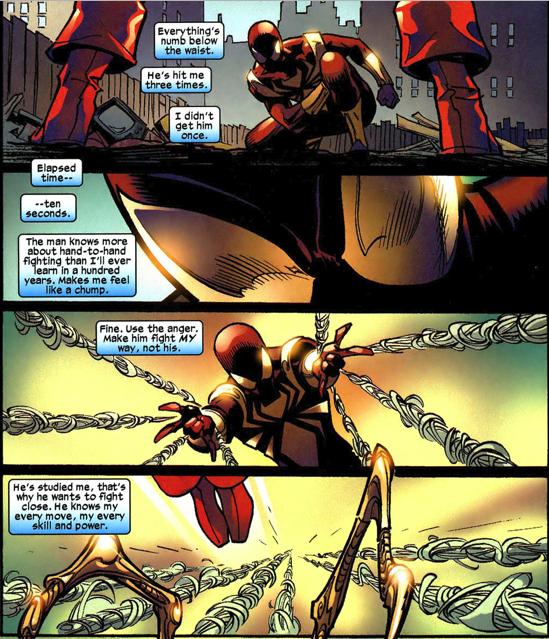 The only thing Peter has going for him is his new Stark-supplied suit. Peter hasn't been in it long, so Cap hasn't had time to research or study it, much less know its capabilities - like the extra arms. 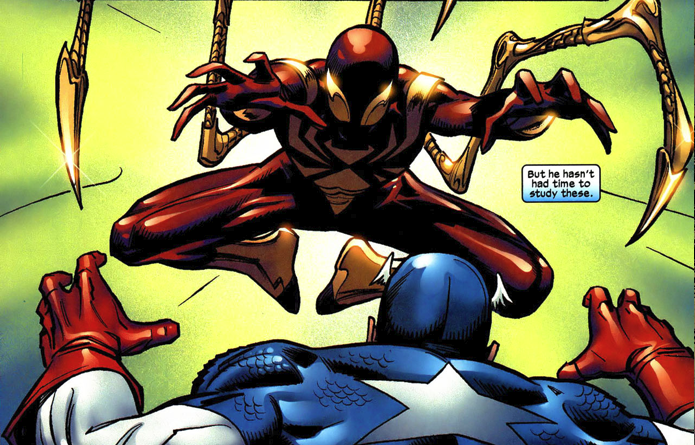 Peter finally gets a single hit in.

The battle ends when Cap runs off to deal with something else, but we can make some informed speculation based on the progress of the battle.

Up until Peter activated the extra functions of the suit, Cap was winning, despite holding back. Since Peter abandoned this suit shortly after (using it only for a total of about 5 issues, and all within the Civil War storyline), it's not really fair to consider it as a normal suit he would use.

Conclusion: Captain America would likely win in a normal battle between the two of them.

In a true no-holds-barred fight, it's entirely possible (and likely) that Peter would win. Shortly after Civil War, Peter lets loose and fights the Kingpin in jail and easily defeats him, consciously almost killing him, and leaving him on life support. Officially, Peter can lift about 10 tons (though he has been shown to lift more from time-to-time). True, Kingpin and Captain America aren't necessarily a fair comparison, but the point remains that Peter typically holds back a lot when fighting, and can be a brutal fighter when necessary.

Captain America has peak human strength. It may seem supernatural, but he's only as strong as a human could naturally get through good genes and hard work.

Baseline Spider0Man has the proportional strength of a spider, at least 10 times his weight. But in actuality has been shown to catch, lift, and throw cars, train cabs, pieces of buildings, and buses. He rarely does so because he's not a killer. More regularly, he's limited to smaller coupes unless he's in a killing mood or has the venom suit or some other modification. Dead lifting a Honda or Volkswagen beetle above his head is still way beyond what any human or even Capt can do. 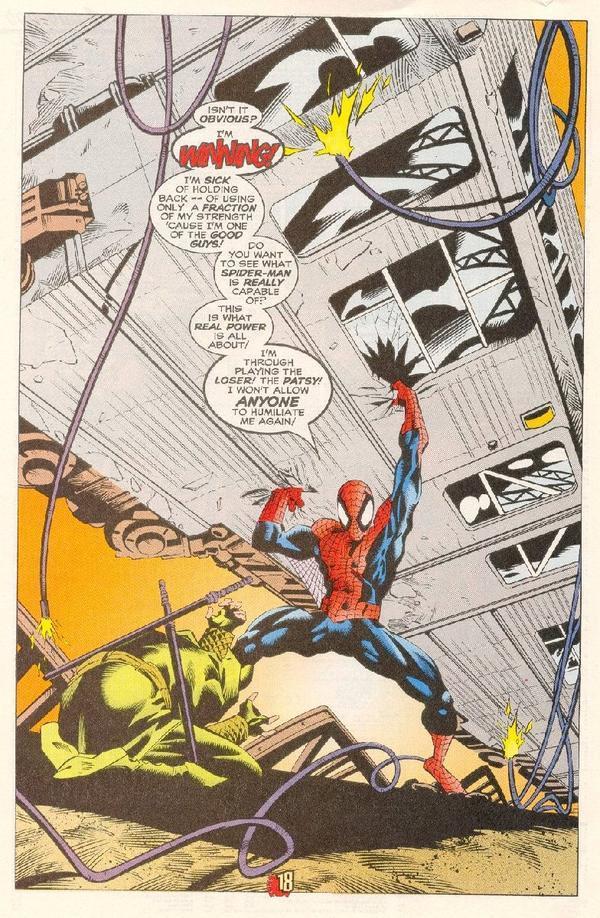 In a fight to the death without rules, if both were trying to kill without impunity, Spider-Man would win out with pure brutality as he can out-think and out-move Cap. But neither Cap or Spider-Man tend to want to kill, least alone each other.

Ultimately, it's plot-related who would win.

Spider-Man has knocked out street levellers with a single punch, see recent issues of Amazing Spider-Man. He is considerably stronger and quicker than Captain America. The fight would last as long as he would want it to last.

So I am a bit biased on this topic (Spider-Man ftw!!!!!) but any answer that says Spider-Man will get "worn down" and then "knocked out" is a insult to the character. To do a battle where a analysis could be properly done we require a set scene such as New York. Next are their morals on or off. And this is a very big thing for both characters.

Spider-Man has been seen when he "lets loose" and his fighting style relies much more on his instinct rather than him trying to be your friendly neighborhood Spider-Man. The same for cap with morals off. So for this scenario we'll put morals off. Next what weapons or abilities do they have at the time of the fight for this we will put what they carry on a regular basis so caps shield and spideys web shooters. Now an accurate answer is able to be made and then elaborated on.

In this setting I would put my bottom dollar on Spider-Man just because of how he fights without any morals. When he is in this state he can use the full brunt of his strengths and his weakness seem to just diminish into thin air. At the end of the day you just have to remember that cap is at the peak of a humans physical peak.

Spiderman is way stronger than captain america but based on cap's experience and the fact that spidey is careless and a novice i give the battle to cap. Spiderman has all the strength any teenager can dream of and is a genious on top of that. Usually this would be bad but after getting his powers he has become more foolish unless it is a highly dangerous situation. Captain America fights as if he is playing chess. While you are planning your next move he is already one move away from winning. Captain America may not have the highest IQ but on the battlefield he is one of the smartest people in marvel.

The factor that spidey looks up to cap as a role model makes this battle hard for him. We've seen spidey go through a lot including fighting his best friend so this might not hold spidey back like people would suspect. Spidey also has one of the most useful fighting styles in Marvel called 'the way of the spider". This fighting helps him combine his abilities, including spidey sense,with his body. Captain America knows almost every single fighting style there is/was. In civil war we saw that ironman asked F.R.I.D.A.Y to adapt to his fighting style. Afterwards Cap switched up his technique and defeated him. In the battle that cap and spidey did fight for a little cap punched spidey 3 times and he felt numb from the waist down. People doubt cap in this situation because of the strength disadvantage but check this out. Civil War we saw cap bring a helicopter down from the air. A helicopter weighs from 5 to 10 thousand pounds right? Okay now let's talk about the helicopter which was a blue eurocopter as350. an as350 is around 5,000 pounds and it was flying. So that is about 5000 pounds and the fact it was flying probably forced him to use about 20 more percent of his strength. Then once he had the helicopter to the ground he stopped it from flying away and could have done it but bucky was choking him.

So based on his strengt, brains and skill i don't think spidey has a chance.

You guys are missing a major variable in this question: Which universe? - Mainstream - Ultimate - MCU

(I'm assuming we are talking about Parker in Mainstream and Ultimate)

I'd have to give mainstream Spidey the win in most match ups. His power and abilities are just to far beyond the others.

I guess ultimate Cap might have a chance against him. Ultimate cap did hold his own for a bit against ultimate Hulk (We'll ignore the ridiculousness of Mainstream Cap once judo throwing Mainstream hulk) However, Mainstream Spidey has had a lot of experience over the past decades and I think he would still wind up on top.

Ultimate and MCU spidey's would probably fall to any of the Caps, just due to inexperiennce. Certainly Ultimate Cap could take either of them. Before he died, Ultimate Spidey might have been at a point where he could take on the other Mainstream and MCU cap.

SomebodySomebody
1
Add a comment  |
Highly active question. Earn 10 reputation (not counting the association bonus) in order to answer this question. The reputation requirement helps protect this question from spam and non-answer activity.

Not the answer you're looking for? Browse other questions tagged marvel comics captain-america spider-man or ask your own question.

13
In Back In Black, did the Kingpin really underestimate Spider-man in a pure hand-to-hand fight?