Looking for a YA book about teenagers in space

I read this book sometime between 1993 and 1997, and it looked like it had been recently published. The cover was blue/green, unusually plain. I seem to recall that it was written by a woman. The story involved a teenage female protagonist on a spaceship with several other obnoxious teenagers, all of them overachieving types on a special field trip, or a school competition. Something goes wrong (can't remember what, possibly a technical failure) and they are forced to cooperate to save themselves. There is a lot of arguing and some romance involving the protagonist and a male character. Can't remember anything else and it's a long shot, but I'd be glad for any ideas. Thanks.

Is it possibly Earthseed by Pamela Sargeant? The competition doesn't start until they start reaching the planet, but it does involve teenagers and some of the covers are fairly plain.

Many years into the future, a last-ditch attempt to save humanity was created, a project known as Ship, an AI containing DNA of different Earth flora and fauna and sent into space to find a new planet. Also created are a group of children using genes from the leaders of the project, all raised by Ship, and of whom Zoheret is the main character. Now in their teens, the Zoheret and the others are subjected to their last test, a competition within the Ship's Hollow, a simulated Earth-like environment 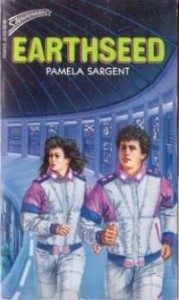 It was published originally in 1983, but it's been sporadically republished since then.

Not the answer you're looking for? Browse other questions tagged story-identification books young-adult space or ask your own question.