Is there a place I can go to see the most science fiction and/or fantasy books sold of all time?

From the wikipedia article on Stephen R. Donaldson and his "The Chronicles of Thomas Covenant the Unbeliever":

The Chronicles were originally published as two trilogies of novels between 1977 and 1983. According to his current publisher, Putnam's, those two series sold more than 10 million copies. A third series, The Last Chronicles of Thomas Covenant, began publication in 2004 with the novel The Runes of the Earth. With the second book of that series, Fatal Revenant, Donaldson again attained bestseller status when the book reached number 12 on the New York Times Bestseller List in October 2007. (https://en.wikipedia.org/?title=Stephen_R._Donaldson)

In addition he had a third series in the Thomas Covenant lineup which included four books, one of them "Fatal Revenant" is the second of that series, and is listed in the article as a best seller.

He also had several other series as well as books of short stories.

I'm trying to figure out his place in history since he was my favorite author growing up. I loved him even more than Piers Anthony, Tolkien, Zelazny, Eddings, and the others that were popular at the time.

I've been searching for awhile to find out how what the total sales of his books are and can't find it anywhere. I remember reading once that at the time his books were only second to Tolkien's in terms of total sales.

I'm sure Harry Potter is one, Tolkien is second, but I'm not sure how it goes or is broken down from there.

Does anybody know of a site that lists science fiction and fantasy books and/or series by total number of book sold? It doesn't have to be a site, any other reference material is fine, or if you just want to post the results here then if you can give me maybe the top five and then the author I am asking about Stephen R. Donaldson.

I have found you a couple of sites with list of top selling books, top 10 most sold books. This second list shows donaldson around number 16 based on his 10 million ish sold. list2 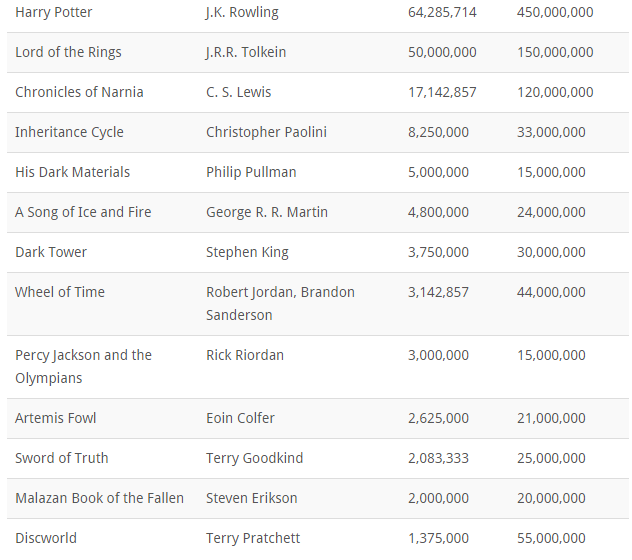 As request i found you an even better list, of 200+ fantasy authors, each list has updated sales from each author as of march 2015. Some figures can only represent what each specific author or publishing company has release.

After a bit of research, I came up with the following list of the most sold books in the sci-fi/fantasy genre:

This is based on this Wikipedia article for the best-selling books generally. Donaldson does not feature in this list.

Not based on number of books sold but purely on polling, this list ranks Donaldson in place 17 amongst the best science fiction writers.

This infographic (source) may be of interest to you. As said in the linked article, the scope for 'sci-fi' is a bit wide:

5
Was Elena ignorant or forgetful of "The Law of Death" when she performed her summoning?
6
Is the 7th of the Seven Words ever revealed and what are their meanings?
7
What is the actual time relationship between the Land and our Earth realities?
5
What is the genre of fantasy stories that take place in a science fiction universe?
11
Did Donaldson say anything about the similarities between "Thomas Covenant" and "Lord of the Rings"?
6
Which direction do the rivers run in The Land?