What is the first instance of a pink armored military vehicle in a SciFi movie?

What is the first instance of a red or pink armored military vehicle in a SciFi-ish movie?

Background of why I asked:

In 2008, a famous Russian director released a movie "The Inhabited Island", based on one of the books by Strugatsky Brothers.

The movie was a commercial flop, despite being one of the biggest SciFi projects of modern russian cinema. While some critics liked it, others ridiculed it.

One of the particular items of ridicule (especially of the memetic internet type, but also real pranks) was the inclusion of a "pink colored tank". Despite the fact that the actual tank in the movie was red and not pink (pink was an artifact of the original reviewer using extremely poor quality bootlegged preview), everyone made fun of it as a symbol of a crappy movie. 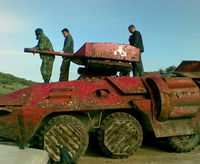 However, I've seen some people claim that the idea of a red/pink colored military vehicle is a perfectly fine one, and was (like many other visuals in this movie) stolen from a western Sci-Fi work.

However, I was never able to figure out just WHICH work it was supposed to have been stolen from? "Tank Girl" seemed the most likely, but the tank there was not red/pink.

So, was that claim accurate, and if so, which Sci-Fi movie did the director "borrow" the idea from?

So, I've not actually seen the movie - or heard of it until I found it by googling "pink tank sci fi film" BUT a 1987 Canadian film "The Pink Chiquitas" did, apparently, have a pink tank in it.

The following is a quote from the plot synopsis from the Wikipedia page for the film.

After placing Mary Ann in the town jail, Tony and Clip go back into the woods and track the meteor to a cave. They escape a group of women who arrive to worship it, but their effort to drive to the next town for help is frustrated by a roadblock. They return to Beamsville to find that the women's takeover of the town is complete, with the remaining men wandering the streets in dazed stupors. Clip attempts to discover how to defeat the meteor by experimenting on the fragment he possesses, but is overcome by the fumes produced after accidentally setting it on fire. Tony is also subdued by a group of women in a pink Sherman tank, who knock him unconscious when they blast apart the town jail where he takes refuge.

I've looked, briefly, for a screenshot of the tank in question but I can't find one. Unfortunately, I'm not willing to actually watch the film to get a screenshot either seeing as this film sounds really quite bad.

While the film is Sci-fi, I have no idea if the director saw the film and took the idea of a pink/red tank or not. BUT, this is the only Sci-Fi film I've found that has a red/pink coloured tank.

World War 2 comedy about a submarine commander who finds himself stuck with a decrepit (and pink) sub, a con-man executive officer and a group of army nurses.

Kelly's Heroes (1970). Tank is not pink, but it does fire pink paint shells at panzers.

Pink tanks are kind of a Russian thing, which seems a more likely origin for the critiques remarks.

Not sure if it was in any movie, but Imperial Guard tanks in Warhammer 40k are painted red as part of Mars camo scheme.

Not the answer you're looking for? Browse other questions tagged movie history-of vehicles or ask your own question.