Has the Hulk ever held any Infinity Stone?

Is The Hulk powerful enough to wield any of the Infinity Stones? In The Avengers/Avengers Assemble, he is shown to dominate a fight with both the Asgardians - Thor and Loki. Does that in any way indicate he is strong enough for the stones?

Yes, 5 of them, in the form of wearing them as gauntlets.

In the Earth-1060(aka Ultimate Marvel universe) "Ultimates Disassembled" storyline. (The 6th story arc of the 4th series of The Ultimate Comics series)

In this story the Infinity Gems actually combine to form two separate Gauntlets. The Hulk wears them to battle his former teammates.

spoiler responses to the comments

There are actually 8 gems in this story, 4 per glove, (the forth slots are hidden in this image). So Hulk had 5 of the 8 at this point. These gems are (in my opinion) individually much less powerful that the MCU ones and only become cosmically powerful when all 8 are used together. It wasn't made entirely clear what all 5 of these gems could do (that I can read). They did know that the "gloves" allowed for matter transference, transmogrification and teleportation.

how they beat Hulk whilst he had these

They didn't!. He won that battle easily and then handed the gloves to an ally of his. 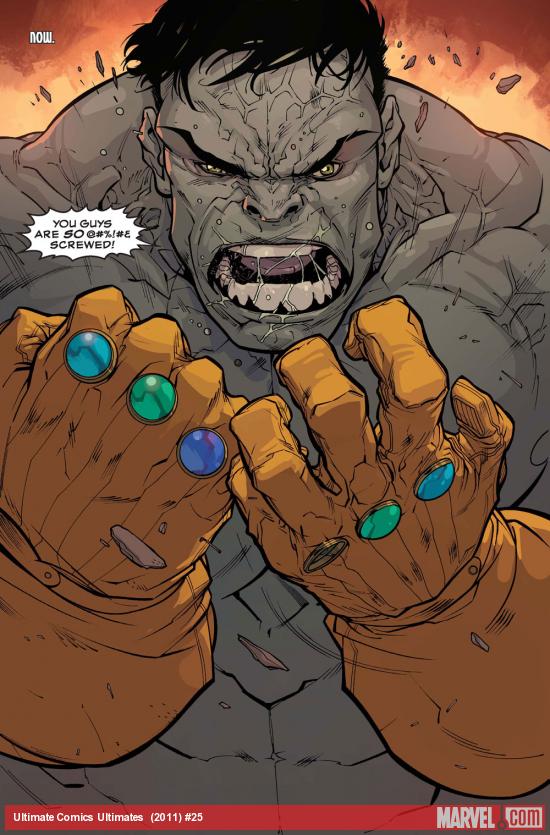 12
How strong are Asgardians?
34
Which Infinity Stones have we seen so far in the Marvel Cinematic Universe?
21
Has Marvel commented on the extra Infinity Gauntlet?
2
Can the Hulk talk?
17
Can Thor wield any Infinity Stone?
5
Is Thor forbidden by Asgardian law to kill anyone, or just other Asgardians?
4
In the Comics are Thor and Hulk evenly matched?
15
The original Infinity Gauntlet
17
Why did Loki attempt this at the beginning of Infinity War?
9
Why wasn't the Black Widow destroyed by the four Infinity Stones she held in Widow’s Run?