Was "Far Beyond the Stars" ever written up by anyone?

In the DS9 episode "Far Beyond the Stars", Sisko experiences a vision, induced by the Prophets, in which he is a struggling science fiction short story writer named Benny Russell, living in 1950s America. In the vision, Benny works for a sci-fi periodical titled Incredible Tales.

The magazine's resident illustrator Roy Rittenhouse (played by J.G. Hertzler, the actor who usually plays General Martok) brings in a folio of drawings to inspire the next round of stories. Benny takes immediately to this one, 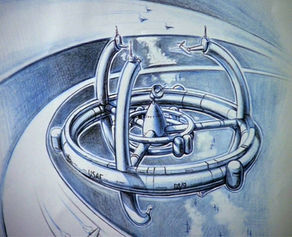 which was captioned "USAF DS/9". He subsequently writes a story with the title "Deep Space Nine" — later retitled "Far Beyond the Stars" — about a space station in the future. A conflict with the editor ensues because the space station's commander is not white.

Out-of-universe, does an actual copy of the story exist in some form? Was it ever written up or fleshed out by anyone?

Both Memory Alpha and Beta have articles about the story, including a cover for the issue of Incredible Tales that the story was intended for, 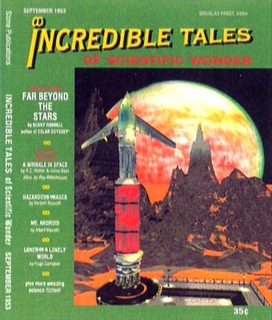 but neither article indicates whether the story had ever been written up by someone, either by the episode writers themselves or within a subsequent Star Trek novel. I would even be interested to know if it has appeared as fanfic.

There does not appear to be an official, complete version of the story-within-the-vision, Far Beyond the Stars. All we have are the excerpts that were quoted on screen.

Even the writing in Benny's cell in "Shadows and Symbols" is not really Far Beyond the Stars, although it is pertinent, and not just lorem ipsum text. According to Memory Alpha:

When deciding what to actually write on the walls, Okuda used an early manuscript draft of the Star Trek: Deep Space Nine Companion, and he had his team copy out the episode summaries from every episode prior to "Shadows and Symbols" – so the writing is literally the history of Deep Space 9.

So, from a literal standpoint, yes, what Benny Russell "wrote" on the walls of his cell (actually the art department) was published, as the episode summaries in Star Trek: Deep Space Nine Companion. However, no actual Pulp Era-style story or novel with the conceit that it's Benny Russell's tale has been published.

Not the answer you're looking for? Browse other questions tagged star-trek short-stories star-trek-ds9 fan-fiction or ask your own question.