What does the Klingon Empire Emblem represent?

I've included a picture below of it for your convenience. I'm looking for ideally a canon (but non-canon will suffice if there isn't a canon explanation) explanation of what this emblem represents. 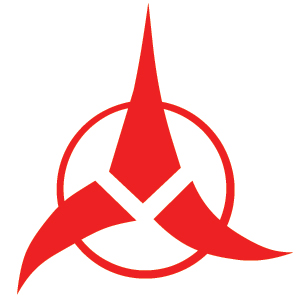 This is discussed at some length in the Microprose Game "Klingon Honour Guard". In short, the three blades were literally those of the enemies of Kahless who, upon the defeat of their leader Mogoth, all laid down their d'k tahg knives on the ground in fealty to Kahless who then drew a circle around them.

These weapons supposedly represent Strength, Duty and Sacrifice with the connecting circle (which surrounds them) representing Honour.

In gratitude for their leadership and training, qeylIS decreed that the Honorable Three should continue to teach their skills to Warriors of future generations.

O'gat, qolaS & toHqa swore an other of loyalty to qeylIS; they placed their Daqtagh knives on the ground, one by one, symbolizing strength (lower right), duty (lower left) and sacrifice (central spike); and connecting the three weapons, qeylIS drew a circle, symbolizing honor - the force that surrounds and unites all the Klingon People."

Interestingly, the Interplay game "Klingon Academy" contains a dramatically different interpretation. General Chang vouchsafes that an ancient three-bladed weapon was the inspiration for the emblem, chosen by Kahless to represent the virtues he felt were most important; Duty, Honor and Loyalty

We have all come know the symbol of the Empire. It has been called many names throughout the ages. Perhaps the least understood is the Heart of Virtue or tIq ghob in the ancient tongue. The Heart of Virtue originated from an archaic weapon favored by qeylIs, The Unforgettable. It is said he chose this as the symbol of his house and later the Empire because of the weapon's unequaled balance. Yet, this is inaccurate. qeylIs chose it because each of the three blades represents those virtues that are the very foundation of every true warrior. Duty, Honor, Loyalty. Each in perfect balance.

Of these three blades, Duty is the first virtue. Duty is the beginning and the end of the warrior's path. Without Duty a warrior becomes slave to vain, glory, and reckless self-interest. A true warrior will not tolerate these vices neither in his comrades nor in himself.

The longest blade of the Heart of Virtue belongs to honor. It is the most difficult to master. It has been said, "Mine honor is my life. In that I live. And for it I will die!”

The three-pronged emblem that symbolizes the Klingon Empire appears to be ancient, as it can be found mounted above the Gates of Gre'thor, the Klingon underworld, as seen in Voyager S06E03 "The Barge of the Dead".

Kahless the Unforgettable carved the emblem into the first bat'leth ever forged, so it was presumably a part of Klingon culture prior to its forging.

Given that no official explanation of the design is ever seen or discussed in canon, it's possible that even the Klingons themselves have forgotten its origins. The emblem does keep up with the overall Klingon cultural motif, however, which appears to favor triangular designs and the number three. This design scheme is seen throughout the Empire in its architecture, weapons, and ship design.

If you look at the Viking symbol on Odin's Horns, you will see that it makes reference to toasting rituals and a Meade made from blood. The two symbols are similar.

Klingons have "heart", what we call "soul" which is derived from "sun" or "spirit", and mistranslated biblically as "son". Their symbol represents Birkeland currents, which carry electrical power from the stars. It is the giver and strength of life, of which they have an ample amount. A representative gif can be seen below.

16
What (if any) is the symbolism of the Bajoran emblem?