Fantasy book where a young prince becomes a mage

When I was younger (11-12 years old, so the early 2000s) I once read a story where a young boy, who may have been either a young prince or a squire of some sort, is recruited by a wizard and taken to a city to train as a mage.

I seem to remember him living in dorms with the other children at this school, until he gets into difficulty with another of the boys in the dorm. He is kicked out of the dorms and ends up living above a blacksmith shop (I think).

I remember it being the first book in a series of books of which there were about 3 out at the time. I think one of the stories was about the boy going to a tower to do something or other.

Does anyone have any idea what this book series is? I haven't been able to find it for years now but it was a story I really loved.

This is School of Wizardry, the first book in the "Circle of Magic" series by Debra Doyle and James D. Macdonald. Randal is indeed training as a squire when he is inspired to join Madoc, a visiting wizard, to become a mage. He does indeed get into an altercation with another student, although him moving out of the dorms is more of an offered choice than him being kicked out as I recall it. Here is the summary from Wikipedia of the first book:

The protagonist, Randal, a young boy preparing for knighthood at Castle Doun, leaves his old life behind and follows Madoc the Wayfarer, who takes him to study at the Schola Sorceriae in the city of Tarnsberg. He struggles with his studies, aided by an elder student, Nick, and comforted by a young orphan lutenist, the girl Lys. After he narrowly squeals through exams, the young and charismatic Master Laerg takes an interest in Randal, tutoring him in private; but his motives are less than honest.

The second book, The Secret of the Tower or Tournament and Tower, indeed has him traveling to the tower of a Master Balpesh to seek a boon from him as a result of the events of the first book. 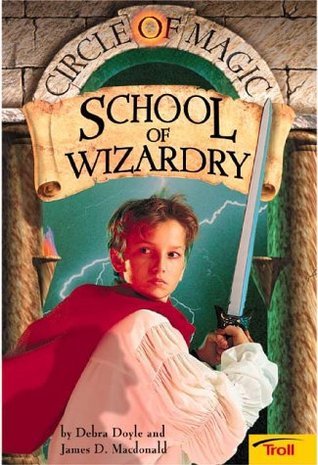 8
Fantasy book where a sword is imbued with rune magic
13
Identify a book series, where order fights against chaos and they travel back in time
7
Fantasy book series where main character makes potion to give him power to turn things to gold but accidentally gives him super speed
12
Young adult fantasy book about a woman's body being caught in a fisherman's net
12
Children/ Young Adult Fantasy Book featuring fairies
8
Fantasy book with an incompetent young magician
13
Story about a young mage attending a school who is probably an arch mage