I remember watching this on TV in the United Kingdom in the late 1970s or early 1980s. I only saw one episode, and the ending resolved very little, leading me to believe that it was a pilot for a TV series that ended up not being made as opposed to a made for TV movie.

It was live action, but the non-human characters were puppets or animatronics, not actors in costumes. The main characters were the goofy looking alien robot crew of a spacecraft - their design was vaguely similar to the robots from the Cadbury's Smash advertising campaign.

Some other details that I remember:

This appears to be Stainless Steel and the Star Spies, released in 1981 in the UK. 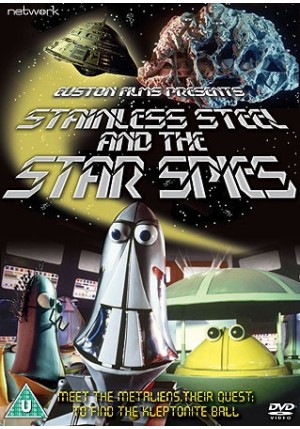 I found this article about it which mentions the kleptonite ball and the "don't matter".

Stainless Steel chronicled the adventures of the crew of ‘SS Compromise’ – a race of robots called the Metaliens – and their quest to retrieve the Maguffin-esque Kleptonite Ball and return it to the tyrannical leader Kublai Chrome back on their home planet. Commander Steel and his crew, amongst them Lieutenant Utensil, Professor Gizmo, Gadget and Canz, are transported through a Black Hole into a ‘Don’t Matter’ Universe and forced to search for the ball on a planet called Earth.

It also includes a photo of Gadget. That's Gadget on the left. 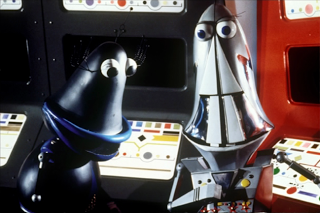 This other description mentions the kleptonite ball being mistaken for other items, including a fortune teller's ball.

the Metaliens pursue their Ball to this strange new planet. It masquerades as a Christmas tree decoration, a bathroom ornament and a fortuneteller's ball, and chaos ensues as the Metaliens' retrieval robot Klepto pops up in the everyday lives of the human inhabitants, who are blissfully unaware of the fantastic galactic situation that's unfolding...

It was a tv pilot that was not deemed successful, and never got a full order.

Not the answer you're looking for? Browse other questions tagged story-identification aliens tv robots or ask your own question.

4
TV episode with characters similar to the Smash Martians

7
1990s (?) Animated sci-fi cartoon. Search for Indiana Jones lookalike
3
Novel with aquatic aliens that block humans from seeing them
11
Black-and-White Sci-Fi Movie with Cone-shaped Aliens
4
Animated children's show from the early 2000's - drink turns you into an alien
5
Disney live-action film involving a boy who invents a bicycle that can do super-jumps
7
Looking for novel about unbelievable alien abductions hiding real ones