Can Beast Boy turn into other humans?

This question could apply to any superhero who can turn into animals, although the only ones who come to mind are Beast Boy and the woman from the Wonder Twins. To avoid making the question too broad, I will focus on Beast Boy.

He can turn into animals. People are animals. So can he turn into other people?

It doesn't appear that there is any reason he can't shape shift into other humans, albeit green ones.

He also doesn't appear to be constrained by Earth-born creatures, or even by creatures with a certain lower limit of intelligence.

Beast Boy has also shown the ability more than once to transform into alien animals, including sentient species such as the Gordanians.wikipedia

He has total control of his shape shifting abilities.

Recently he has also shown the ability to partially transform into an animal, such as acquiring octopus tentacles on the lower half of his body, while his upper-torso remains unchanged.wikipedia

So either he can take the shape of other humans, and simply never has (or never has thought to try) or it is an arbitrary constraint imposed by the writers that makes no logical sense. Unless they don't consider humans to animals...

Wolfman (co-creator of the New Teen Titans) in a 1982 interview with Dwight Decker answers this question...kinda:

DECKER: Can Gar Logan change into absolutely anything and use his animal form for convenience?

WOLFMAN: No. If I understand the character correctly, in terms of his powers, and that’s picking up off the Doom Patrol stuff, he can only change into animals. Yes, I know the next question is, ‘Can he change into a person because a person is an animal?”

DECKER: It would have to be a green person, though.

WOLFMAN: It would have to be a green person.

DECKER: He could probably do Brainiac 5.

WOLFMAN: Yeah, I would tend to doubt it. I would rather keep him as an animal. The original serum that his real father, Mark Logan, created was to solely tie in the genetic code between humans and animals. I assume that’s the only shape he could take. Yes, we have him turning into a Gordanian in issue 24, 25. Some levels, I’ll extend myself, but I won’t have him turn into other people.

The reason as to why Garfield (Beast Boy) is never seen shapeshifting into other humans, although his powers should allow it, is because any human he turns into would be green and there would be no point for him to use that ability unless he was turning into someone like the Hulk.

The following panels are clipped from the legendary "X-Men and Teen Titans" (1982) graphic novel. This "Elseworlds"/"What If?" scenario might therefore not be strictly canon, but the story remained true to the characters. The panels speak for themselves in that "I can't mimic people". And then, whatever he turns into is going to be green. 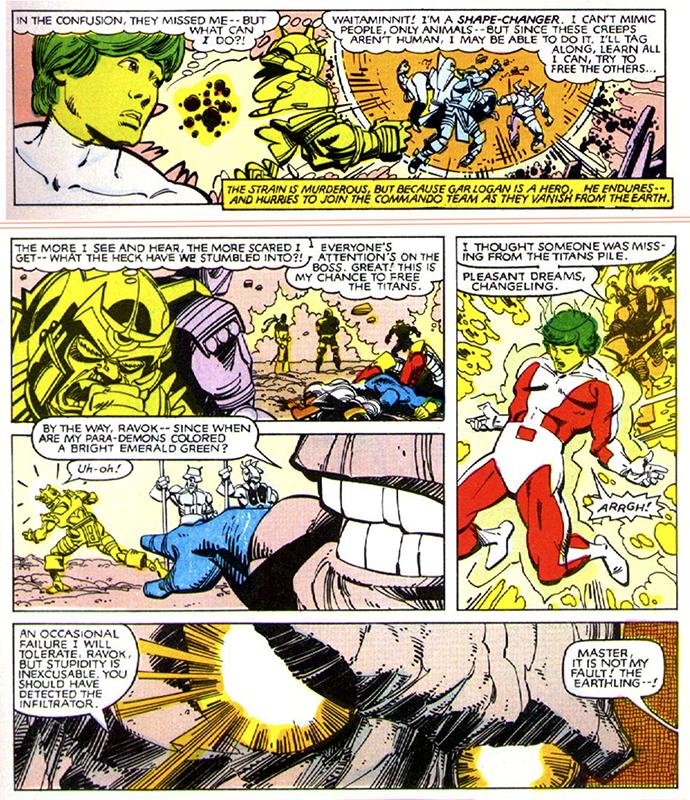 This next panel comes from "Teen Titans" #15 (1982) which indicates that Garfield going outside the parameters of "animals" requires some intense emotional trauma. 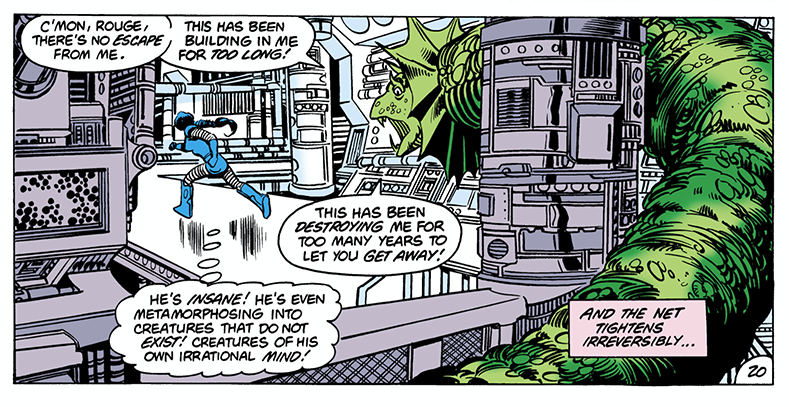 Not the answer you're looking for? Browse other questions tagged dc super-hero dc-animated-universe teen-titans beast-boy or ask your own question.

8
Identify a story in which Watch Tower was crashed on the Moon and Wonder Woman murdered a guy
26
Is Batman's 'relationship' with Wonder Woman comic-book canon?
3
Can Beast Boy regenerate limbs?
6
Can Beast Boy mate with animals?
3
When does Beast Boy show up on Teen Titans?
12
Can Beast Boy change sex?
5
Looking for an animated movie where Superman is in a coffin sent to the sun
9
Can Beast Boy turn into cryptids?
4
EBook (maybe first in a series) where people gain superpowers after an alien falls to Earth, protagonist is a single mother