I'm looking for the title of a show I saw when I was a child. I'm not sure what year it was made, but it could have been anything before 2000, really. I remember some overall plot features and details about a few episodes.

Overall Plot: The main character was a white male, probably in his early 20s. There was also an old man, a woman who was also probably early 20s, and some sort of small alien creature that I don't believe spoke english. Together these people travelled to different dimensions/through space (I think) on a ship.

They were being persued by a black male, probably about 30-40s who wore some kind of red armoured suit. Initially you believe him to be the bad guy, but I think there was a reveal where it turned out he was the good guy and the old man was the bad guy.

The following are some episodes, or parts of episodes, that I vaguely remember:

1) An episode that featured a character that was a human sized rag doll, possibly raggedy anne? I believe there were multiple 'toy' people.

2) An episode where the woman ate a piece of mushroom she found, which then turned out to be part of a 'mushroom person' and she fell ill

3) At some point the guy in a red armoured suit got trapped on a desert planet and couldn't get up. He tricked some wild old woman into helping him up and then he escaped?

NOTE: I am a big scifi fan. I have seen all of the big tv shows like Dr Who, Sliders, Star Trek, Red Dwarf, etc. It is not one of them. It is not going to be a big show, I wouldn't be surprised if it's one of those shows that had like 10 episodes and then got cancelled. I saw this in England in the early 2000s, probably on the SciFi channel, but I have a feeling it was either American or Canadian made.

I read a lot of science fiction as well, so I'm pretty sure it's not some sort of adaption of a popular scifi novel, so it's probably either an original piece or adapted from a relativley obscure source. 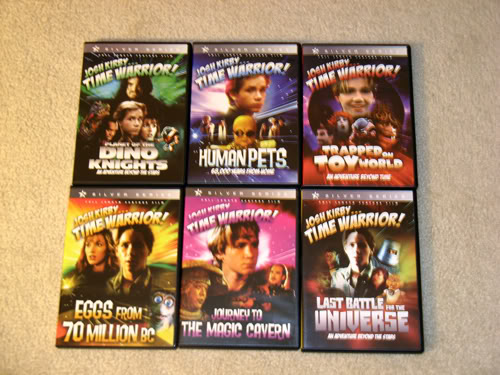 In the 25th century mankind has found a device capable of destroying the universe. Irwin 1138 separates the Nullifier into 6 pieces which he scatters throughout time. When the evil Dr. Zoetrope goes after the pieces, Irwin 1138 must try to stop him, with the help of a 20th century teenager, Josh Kirby, and a half-human warrior named Azabeth Siege. The race is on.

The living rag doll might have come from the Toy World episode.

Irwin 1138 eventually turns out to be the bad guy all along.