What are these bowls of blue water in Star Trek TNG?

Why are there bowls of blue water on the night stands in Star Trek: The Next Generation?

In multiple episodes, there is a small bowl with blue liquid next to the bed on a table.

For example, from TNG 5x18, Cause and Effect: 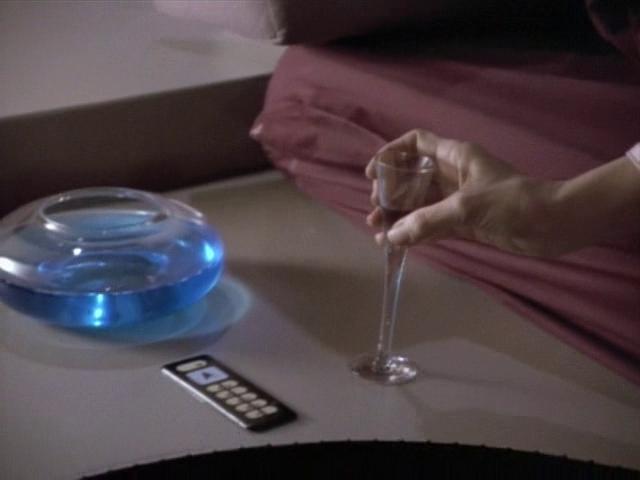 I've tried hard to research this question since it was posted, with two obstacles:

However, the bowl immediately struck me as being Feng Shui in nature. 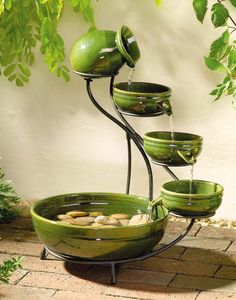 There do appear to be Feng Shui connections to TNG-era Star Trek: for instance, the 2007 television series Feng Shui Living was created and produced by Rod Pyle, who was previously a visual consultant for DS9 who worked closely with Mees and with Star Trek designers Rick Sternbach and Michael Okuda. (Sternbach contributed much of the wall art for the TNG sets.)

Based on the above, my best guess is that, both in-universe and out-of-universe, the bowl of blue liquid is just some 24th Century Feng Shui.

(Either that, or Beverly needs a lot of Romulan ale to get to sleep at night...)

My good friend Alan Sims (Property Master for Star Trek: TNG) was kind enough to address this. In short, they were most likely just used as futuristic-looking set-dressing with no actual in-universe purpose other than as background decoration.

Q. Purely out of interest, what was the weird bowl of blue liquid in the same scene used for? I always figured it was some kind of room scent.

AS: ...It sounds like it was a piece of set dressing via ‘Set Decorator’ and they would have just used blue food coloring with H2O

72
What is this painting on the Enterprise showing?
6
What is the manufacturer/brand of the glass that Dr. Crusher breaks?

32
Are there video games in the Star Trek universe?
62
In Star Trek TNG, why does everyone have plants at the head of their beds?
1
Why are TNG's initial airdates in UK 2-4 years after USA initial airdates?
16
Why are Star Trek ships (mostly) built by hand?
11
What are the jars of red and blue liquid in sickbay?
11
3 1/2 Pips in Star Trek TNG
15
Identifying a Star Trek TNG episode by text passage occuring in Carbon Based Lifeforms song "Neurotransmitter"
14
Star Trek end credits blue glow
8
Why did Star Trek: The Next Generation season 2 only have 22 episodes?