Where do baby Smurfs come from?

I know that Smurf lore isn't restricted to just the cartoon, as there were also cartoon strips in newspapers, comics, & perhaps even other materials about Smurfs. I haven't had the good fortune to read them all, however, so I'm hoping someone else can help me answer this:

Where do baby Smurfs come from? We witnessed the creation of the first female Smurf (Smurfette) by Gargamel, and it's made plain that she's the first of her kind. However, the other Smurfs (presumably male) fawn over her and act like they're romantically interested in her. However, we also learn that she isn't a REAL Smurf until Papa Smurf turns her into one magically.

Are other Smurfs created magically, or is the lore implying that they've always been there and are somewhat immortal from age and/or sickness?

Apparently my first comment was more or less correct. From a Wikipedia page titled "Baby Smurf", regarding a story by the same name:

During a blue moon night, a stork leaves a baby Smurf at the door of a Smurf house and leaves. The Smurfs quickly hand the baby to one another until he ends up with Smurfette. The next day, all the Smurfs converge to see the baby, save for Grouchy Smurf, who hates baby Smurfs. Brainy Smurf asks if the baby is Smurfette's, which offends her.

The baby is adopted by all Smurfs (save for Grouchy). Handy Smurf makes a bed for the baby, including a machine to swing it, but Papa Smurf opts for swinging the bed at hand. Greedy Smurf bakes a cake for Baby Smurf, but Smurfette tells him that Baby is too small for cakes. Other Smurfs wash Baby's dirty clothes. When Baby sees Grouchy passing, he tries to imitate his gruff expression, which seems to mellow Grouchy down, but he fakes apathy when Smurfette asks him to carry the baby. Brainy asks Papa Smurf where the baby Smurfs come from, but Papa's answer is so complicated that he still doesn't understand anything. At night, Baby Smurf's crying doesn't let any Smurf sleep.

The next day, the Smurfs prepare a party in Baby Smurf's honor, but the stork arrives with a note saying that Baby was a "delivery error" and must be taken away. Everybody is upset including Smurfette who goes into a non stop crying spree, but they don't have any option but return the baby. However, they soon find that Grouchy Smurf has escaped with the baby. The Smurfs seek for Grouchy and Baby throughout the forest. Grouchy manages to avert being found, but then he decides to return to the village after noticing the many dangers Baby would face in the forest as well as Baby Smurf falling ill by catching a cold.

After the Smurfs give Baby back to the stork, life in the village turns sad; even Jokey Smurf and the Smurf getting his trademark explosive present try to laugh but end crying. That same night, the stork returns with Baby, with a note saying that Grouchy Smurf's care for the baby has caused the baby to be allowed to stay with the Smurfs. 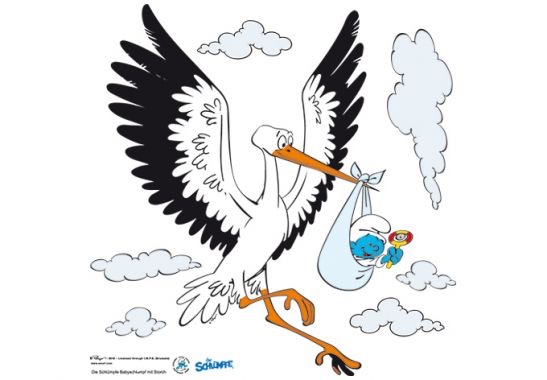 Since the baby was a surprise, it would appear that there was no sexual activity involved, but Smurfette getting offended when Brainy asks if it is her baby suggests that the Smurfs know how reproduction usually works.

The other answer is already good but there are still a few things missing though:

1.) The Smurfs cartoon is quite inconsistent when it comes to female Smurfs. Initially, Smurfette was the first one, but in the cartoon, later on, we see a grandfather and a grandmother smurf (sorry, don't know the exact English names for them as they usually are not 1:1 translations). Thus, even before Smurfette, there were female Smurfs existing, just not in that Smurf village. Also, as these Smurfs and others that appear time and again in the series do not live in that village, it is possible that there are other Smurf villages existing (although I don't remember seeing one explicitly).

2.) In the cartoon, there is one episode where it is shown how the smurf village came to be. There was a stork (or multiple ones, not sure as I saw that episode almost 2 decades ago) involved who brought all of the Smurfs of the village at once to Papa Smurf (who was the only Smurf living there at that time).

Not the answer you're looking for? Browse other questions tagged smurfs or ask your own question.

107
Were the Smurfs the first to smurf their smurfs?
3
How many animated Smurfs movies have been made?